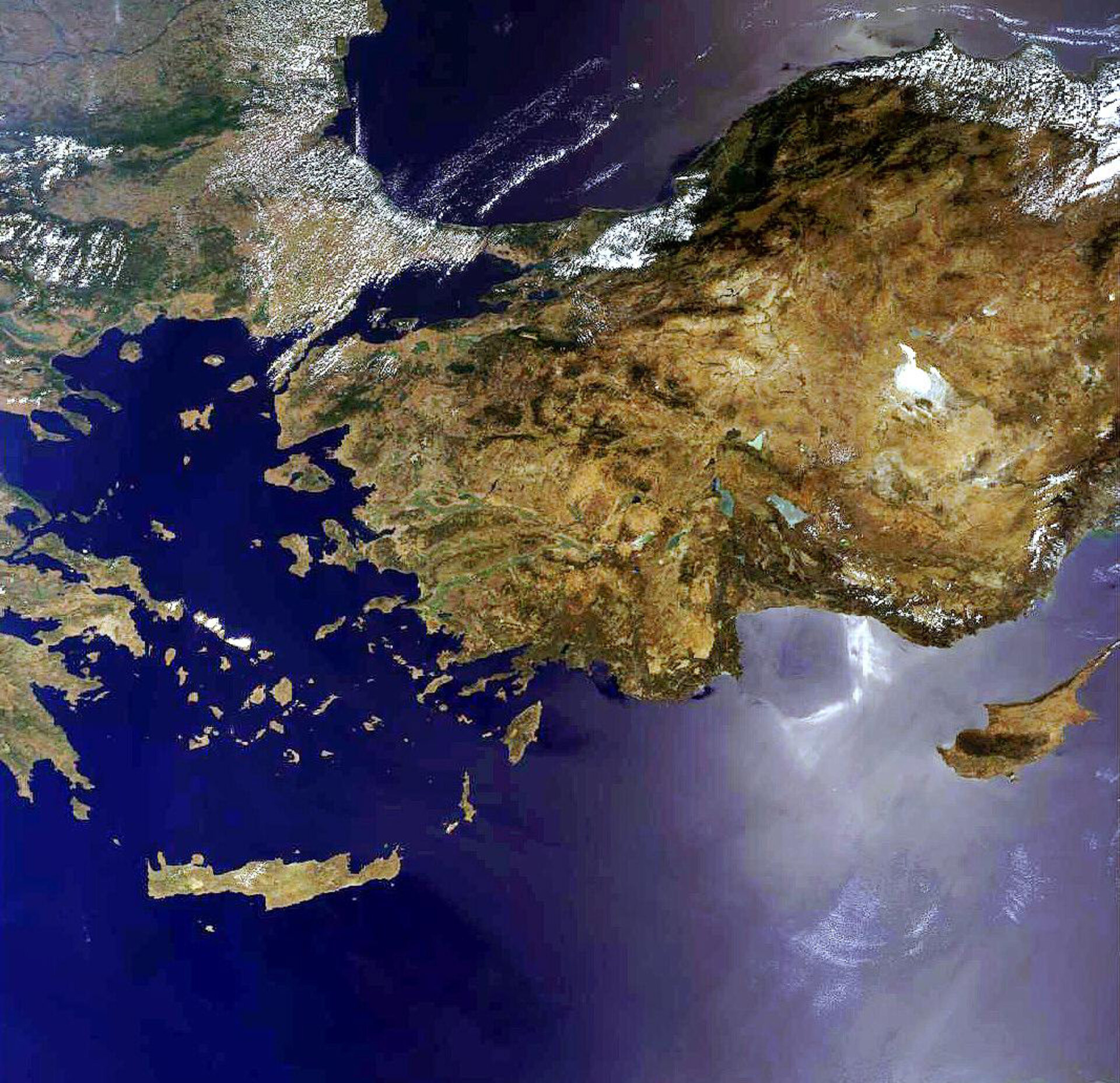 The Eastern Mediterranean Sea area is highlighted in this Envisat image, featuring Turkey, Cyprus and Crete.

Formerly known as Anatolia, modern Turkey was founded in 1923 by Mustafa Kemal, who was later honoured with the title ‘Ataturk’ which means ‘Father of the Turks’. Turkey is a Eurasian country with the majority of its territory located in South-western Asia and a small portion located in the Balkan region of South-eastern Europe. Turkey’s largest city, Istanbul (visible at centre top of image) is the only city in the world that straddles two continents (Europe and Asia), making it a true meeting place of the East and the West.

Turkey has a rich history and diverse culture stemming from various elements of the Ottoman, European and Islamic traditions. Throughout history this region has given rise to many civilisations – such as the Hittites, Thracians, Hellenistics, Byzantines and Ottomans. And because of its strategic location, it has also been invaded by many civilisations, including the Mysians, Celts, Romans and Alexander the Great. It also provided the setting of the legendary Trojan War depicted in Homer’s Iliad.

Turkey’s location has also made it vulnerable to earthquakes with the 1 000-kilometre long North Anatolian fault located just 15 kilometres south of Istanbul. It is also located on the relatively small Anatolian plate, which is squeezed between three other major tectonic plates – the African and Arabian plates to the south, and the Eurasian plate to the north. The combination of these plate movements has been the source of eight earthquakes of magnitude 7 or greater in the last century.

Within three months in 1999, two earthquakes struck Turkey leaving a path of destruction. The first on 17 August measured 7.4 on the Richter scale, while the second on 12 November measured 7.2. According to the International Federation of Red Cross and Red Crescent Societies, the two quakes left more than 18 000 people dead and over 300 000 homeless.

Because earthquakes can suddenly render current maps out-of-date, Earth Observation satellite images are useful for providing updated views of how the landscape has been affected as well as creating reference cartography for emergency operations. In addition, before and after satellite images of the area enable authoritative damage assessment as a basis for planning remedial action.

The island of Cyprus (seen at bottom right) is a former British colony that became independent in 1960. It is the legendary birthplace of Aphrodite, the goddess of love and beauty. According to Hesiod’s Theogony, Aphrodite emerged fully grown from the froth of the sea.

Crete (the elongated island seen at the bottom left of the image) is the largest of the Greek islands spanning some 260 kilometres from west to east and 60 kilometres at its widest point. Crete was home to one of the first civilisations in Europe, the Minoans.