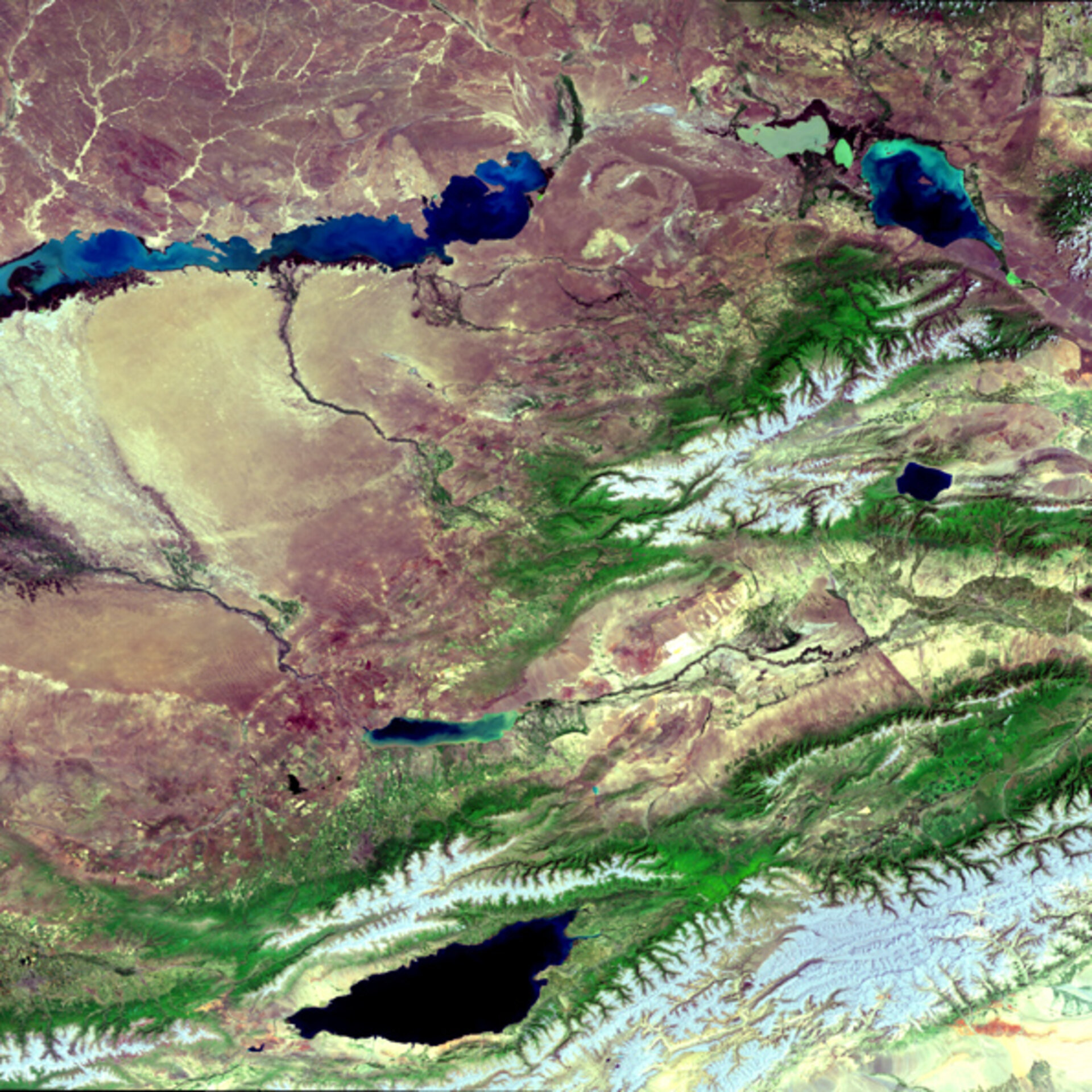 This Envisat image shows the eastern part of the vast country of Kazakhstan and to the south the smaller land-locked nation of Kyrgyzstan, notable for its large ice-free lake high in the snow-capped Tian Shan Mountains.

Located at an altitude of 1607 metres above sea level – seen here near the southern edge of the image - Lake Issky-Kol (Ysyk-Köl) has an area of 6 200 square kilometres, making it one of the largest mountain lakes in the world. Despite being surrounded by snowy peaks its slightly saline water does not freeze in winter and is rich with fish.

Lake Issky-Kol's dark waters are due to the fact that - with a maximum depth of 668 metres - it is deeper than many other Central Asian lakes, notably the elongated crescent-shaped Lake Balkhash to the north in Kazakhstan, up in the north towards the western edge of the image.

Like the Aral Sea, located on Kazakhstan's western border, Lake Balkhash is shrinking due to river waters being diverted that would otherwise go to replenish it. Most prominent here is the Karatol River, along with the Ilu River flowing to its west, off the western side of the image.

Water from both these rivers is important for agriculture in Kazakhstan – note the dark wetlands and greenish patches of irrigated fields along much of their respective courses. In addition the Ilu River has been dammed to form the Kapchagayskoye Reservoir in 1970, providing hydroelectric power as well as irrigation. Much smaller than the water bodies above and below it, the Reservoir is seen in the centre of the image about two thirds of the way down.

Being situated in a tectonic land depression means that in ancient times Lake Balkhash was far larger than it is today, its span stretching across several now-separate water bodies. Several of these can be seen in the image: Lake Alakol, near the eastern extremity of the image towards the border with China is a salt lake. Above it is the greenish, brackish Lake Koshkarkol and next to it the freshwater Lake Sasykkol.

Southeast of these lakes lies the Dzungarian Gate, significant historically as a pass through the mountains for invasion forces from Central Asia and today part of the Silk Road railway between Turkey and China. One last water body in the image, seen south of Lake Alakol, is Sayram Lake (Sayram Hu), within China's Xinjiang province.

Also within the image is the former Kazakhstan capital of Almaty, located at the foot of the snowy mountains, north of the middle of Lake Issky-Kol. Since 1998 Astana, closer to the centre of Kazakhstan, has been the new capital. The Kyrgyztan capital Bishkek is visible as a dark spot in the centre of cultivated plains located west of Lake Issky-Kol, towards the bottom of the western side of the image.

To the east of Issky-Kol, in the snow-covered mountain range where the borders of Kyrgzstan, Kazakshtan and China intersect, is Pik Khan Tengri, at 7100 metres high once quoted as the tallest mountain peak within the old Soviet Union. However modern surveying suggests that Pik Pobeda, located 16 km south is around 339 metres higher.

This image was acquired by Envisat's Medium Resolution Imaging Spectrometer (MERIS) on 16 June 2004, working in Full Resolution mode to provide a spatial resolution of 300 metres. It covers an area of 672 by 672 km.