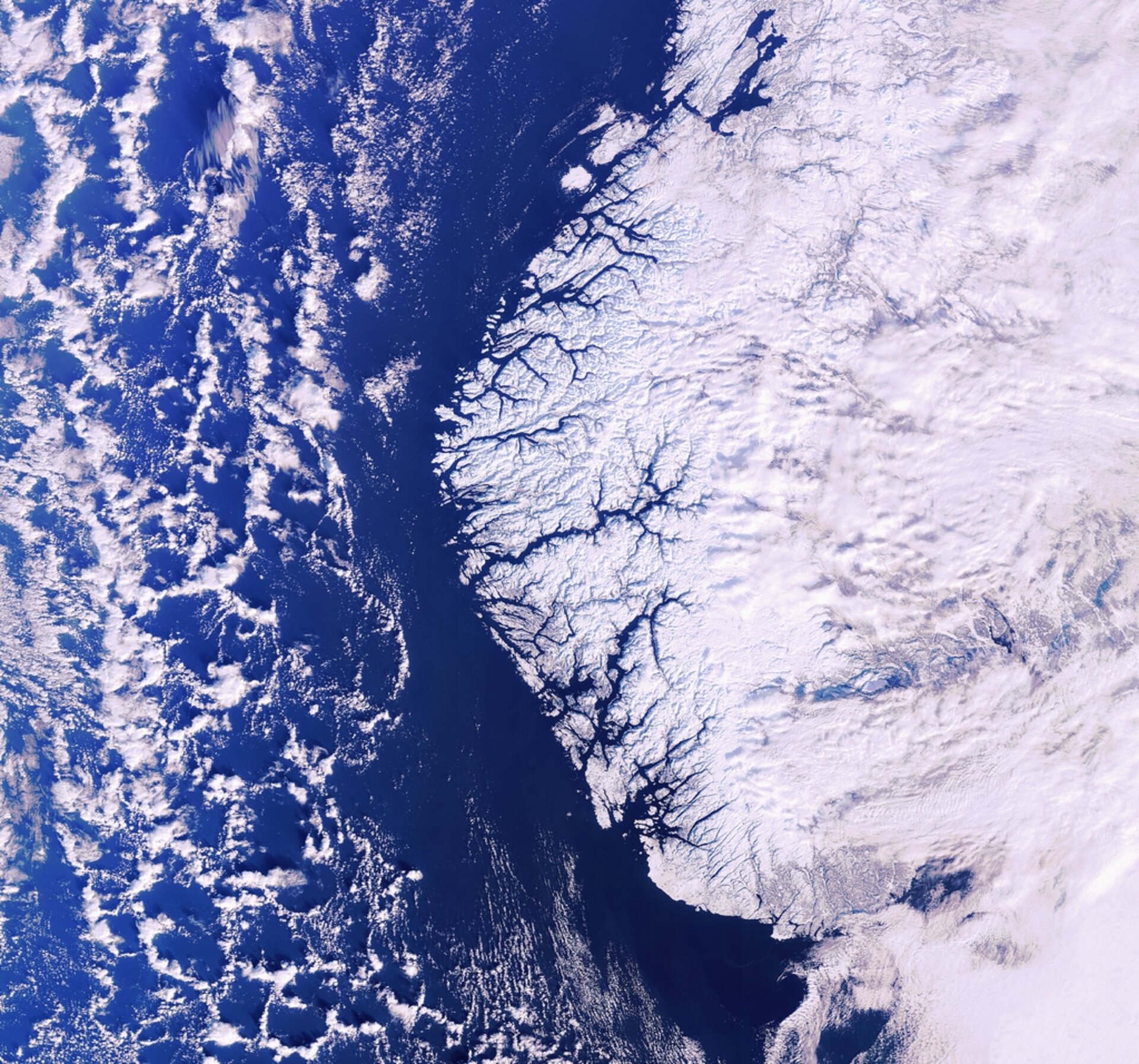 This Envisat image features a snow-flanked western Norway, located on the Scandinavian Peninsula in northern Europe. Norway, Europe's northernmost country, is famed for its fjords – long narrow arms of the sea that commonly extend far inland. Some of these are visible at the left edge of the land as dark lines between the white and snow-covered land.

During the ice age both ice and rivers carved deep valleys in the mountains. As the climate changed, most of the ice melted, and the valleys were gradually filled with salt water from the coast, giving birth to the fjords. Many fjords are astoundingly deep, reaching hundreds to thousands of metres below sea level.

The Sognefjord (image centre) is Norway's longest and deepest fjord, stretching 205 km inland and reaching a maximum depth of 1308 m below sea level. The average width of the main branch of the fjord is about four-and-a-half km. The only fjord larger than Sognefjord in the world is the Scoresby Sund in Greenland.

South of Sognefjord is the Hardangerfjord, Norway’s second largest and the world’s third largest. It is about 179 km long and has a maximum depth of more than 800 m.

Not all of the ice melted when the climate began to change, so parts of the mountain areas remained covered with ice, creating glaciers. Glaciers cover more than 2600 sq km of Norway’s land area. The largest glacier in Northern Europe, the Jostedalsbreen, is situated north of the Sognefjord’s inland branches. Hardangerjøkulen, the sixth largest glacier in mainland Norway, is located to the east of the most northern inland branch of the Hardangerfjord. It served as the ice planet Hoth in the 1980 movie Star Wars Episode V: The Empire Strikes Back.

With its long coastline and pristine fjords, Norway enjoys good conditions for raising fish stocks. Today, some 800 fish farms dot its coastline, and fish is the third most important export product after oil/gas and metal. In terms of Atlantic salmon, Norway is the leading fish farming country in the world.

North of Hardangerfjord is the city of Bergen, which will host ESA’s Living Planet Symposium, from 28 June – 2 July 2010. Nearly 1000 scientific researchers and data users are expected to attend the symposium, previously named the Envisat Symposium, where they will present results and compare findings of ongoing research activities using data from ESA’s Envisat, ERS-2, Earth Explorers and Third Party Mission satellites.

This image was acquired by Envisat's Medium Resolution Imaging Spectrometer (MERIS) instrument on 9 February 2010, working in Full Resolution mode to provide a spatial resolution of 300 m.