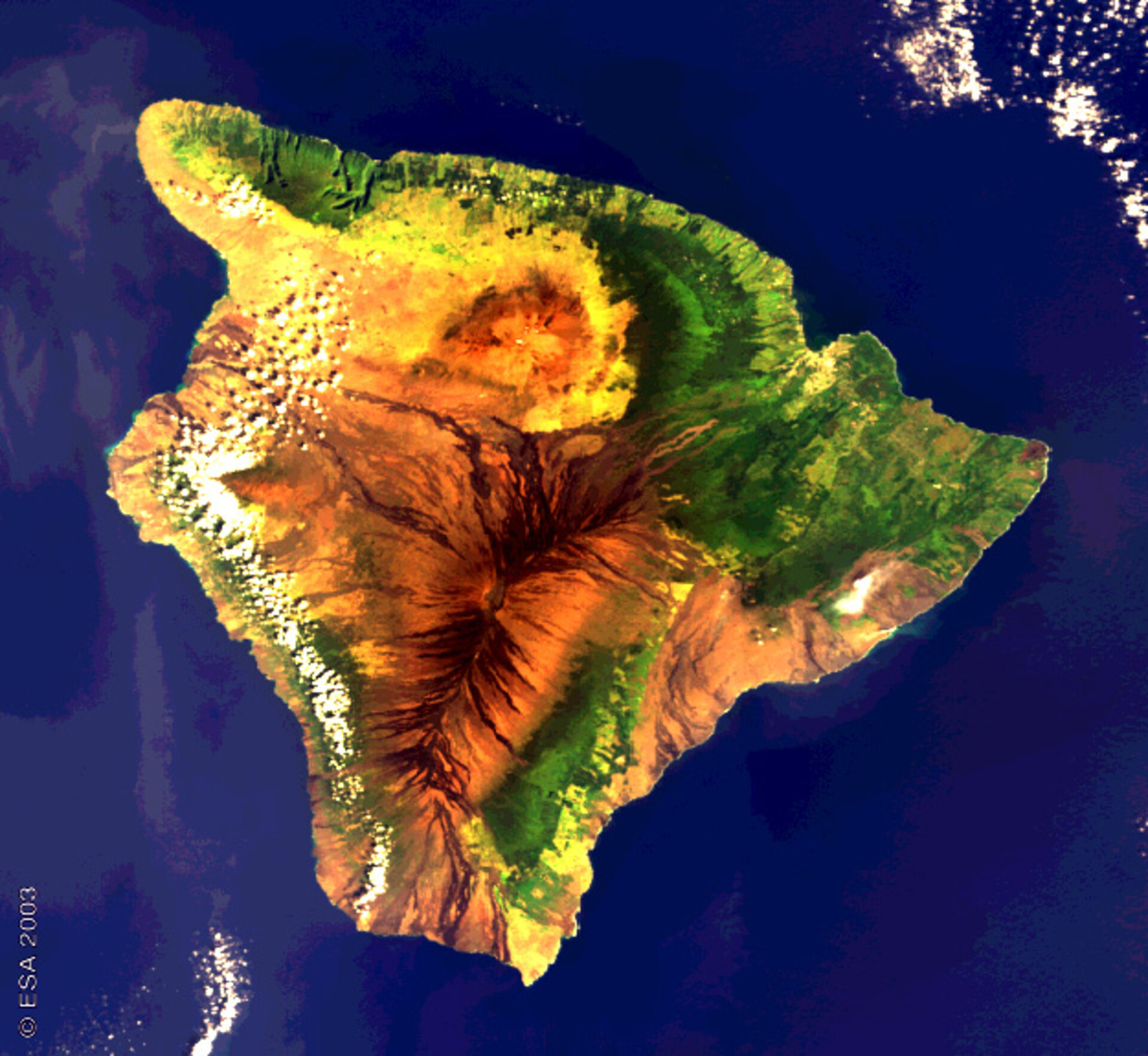 This Envisat image shows the volcanic island of Hawaii (Hawai'i), also known as the 'Big Island', in the Pacific Ocean.

The island is part of the United States' State of Hawaii. Having formed above a magma hotspot in the Pacific plate, Hawaii is subject to frequent earthquake tremors and volcanic activity. It is dominated by two volcanic peaks: the 4170-metre-high Mauna Loa to the south of the island and the smaller, taller, 4250-metre-high Mauna Kea.

The heights of mountains are generally measured from sea level; however Mauna Kea rises a total of 10203 metres from the sea floor, so that if counted from base to peak this shield volcano is actually the tallest mountain on Earth.

The peak of Mauna Kea is a sacred location to Hawaiians and is also an important scientific site: numerous astronomical observatories take advantage of its high elevation above 40% of the Earth's atmosphere and 90% of its water vapour. Because Hawaii is relatively close to the equator both the northern and southern night skies can be observed.

Mauna Loa is also home to astronomical observatories, and the National Oceanic and Atmospheric Administration (NOAA) Mauna Loa Observatory has been measuring atmospheric carbon dioxide since 1958. The combination of the site's altitude and remoteness from any large land mass leaves it relatively unaffected by local influences and so able to serve as a reliable measure of the global atmosphere, establishing the reality of the steady build-up of carbon dioxide associated with the Greenhouse Effect.

The world's largest volcano by area, Mauna Loa remains active, and is responsible for the dark lava-streaked flanks that cover around half of the island. Smoke, visible in the east part of the image, is rising from the Kilauea crater, which is the most active volcano on Earth. An additional greyish plume of smoke can be seen on the east coast to the right of Kilauea, and is due to continuous hot lava spilling into the Pacific.

Hawaii, like the other Hawaiian islands, has lush tropical forests from the combination of heavy rainfall and fertile volcanic soil. On the eastern side of the island can be noted a greater prevalence of vegetation due to moisture brought in by the prevailing Pacific trade winds, while the western side is drier.

Light green and yellow areas in the image correspond to human settlements and plantations growing the main crops of the island: sugar cane, coffee and pineapples.

This 13 December 2002 image was acquired by Envisat's Medium Resolution Imaging Spectrometer (MERIS) working in Full Resolution mode to provide a spatial resolution of 300 metres. The image has a width of 187 kilometres.