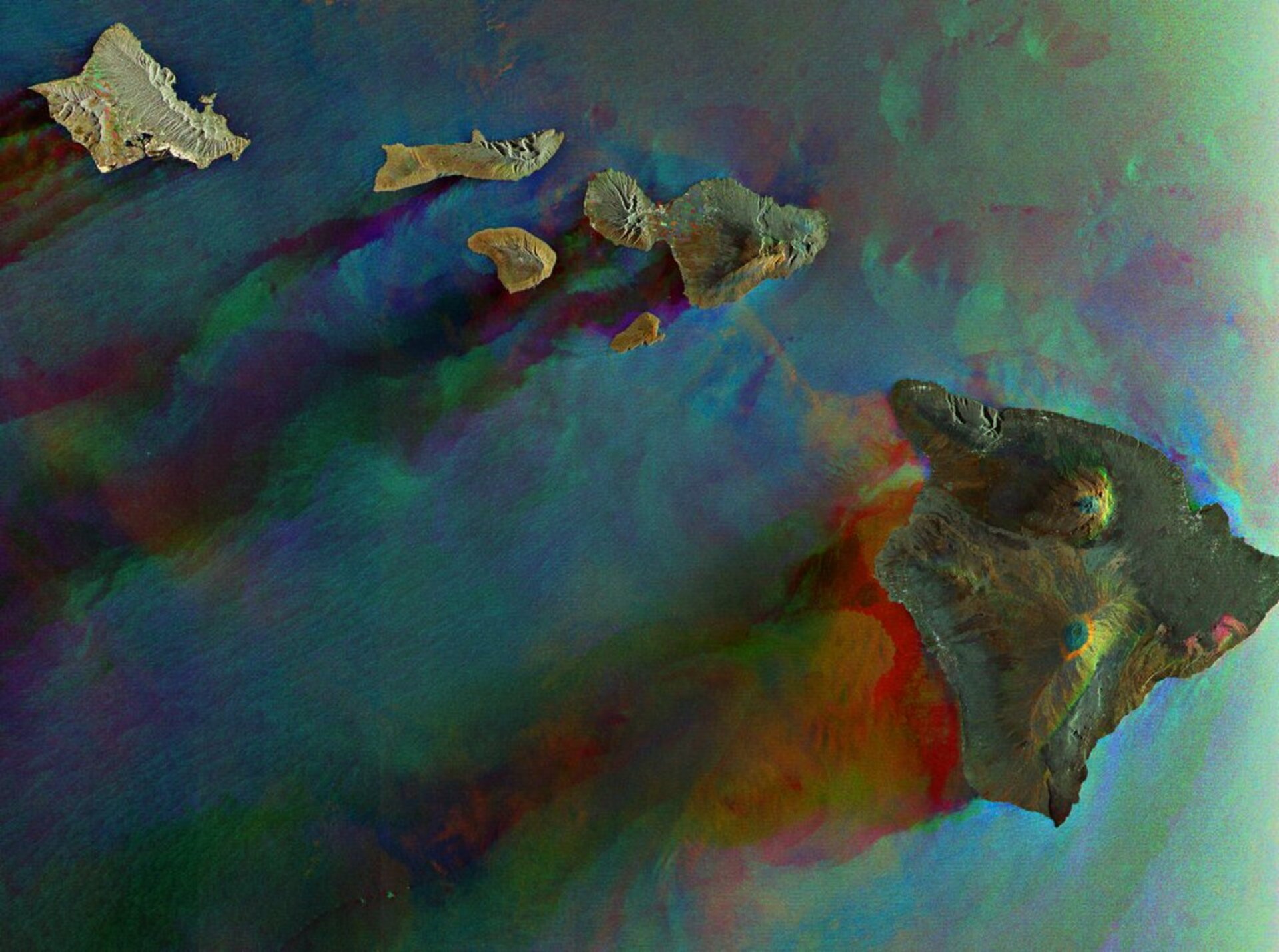 This Envisat radar image features six of Hawaii’s eight major volcanic islands. Visible from right to left are the Big Island of Hawaii, Kahoolawe, Maui, Lanai, Molokai and Oahu. In addition to two other major islands, there are also 124 islets.

The islands stretch more than 2575 km across the mid-Pacific Ocean and lie some 2367 km north of the equator. Unlike other U.S. states, Hawaii is not located within the North American continent but rather some 4000 km southwest of it.

All of the islands are projecting peaks of volcanic mountains that formed millions of years ago when fiery basalt rock erupted through a crack in the ocean floor. Having formed above a magma hotspot in the Pacific plate, Hawaii has some of the world’s largest active and inactive volcanoes.

Reaching 4200 m, Mauna Kea (top centre on the Big Island of Hawaii) is Hawaii’s tallest volcano. The heights of mountains are generally measured from sea level; however, Mauna Kea rises more than 10 203 m (9 km) from sea floor to summit, so if counted from base to peak it is actually the tallest mountain on Earth.

Mauna Loa, located beneath Mauna Kea, is the planet’s largest volcano by mass (some 40 000 cu km). Having erupted more than 33 times since its first documented eruption in 1843, it is also one of the most active volcanoes on the planet. Its most recent eruption occurred in 1984.

Due to the high eruption rate of Mauna Loa, scientists continuously monitor the volcano for signs of unrest. Satellite radar, such as the Advanced Synthetic Aperture Radar (ASAR) aboard Envisat, allows scientists to track small changes in the Earth’s movement that improves their ability to predict volcanic eruptions.

Kilauea, located on the southeastern part of the island around the red and pink areas, is another of the Earth’s most active volcanoes. The current eruption episode began in 1983 and has been ongoing ever since. According to local legend Kilauea is home of Pele, the Hawaiian goddess of volcanoes, and eruptions take place when she is angry.

This image was created by combining three Envisat ASAR acquisitions (27 March 2006, 16 April 2007 and 21 January 2008) taken over the same area. The colours in the image result from variations in the surface that occurred between acquisitions.