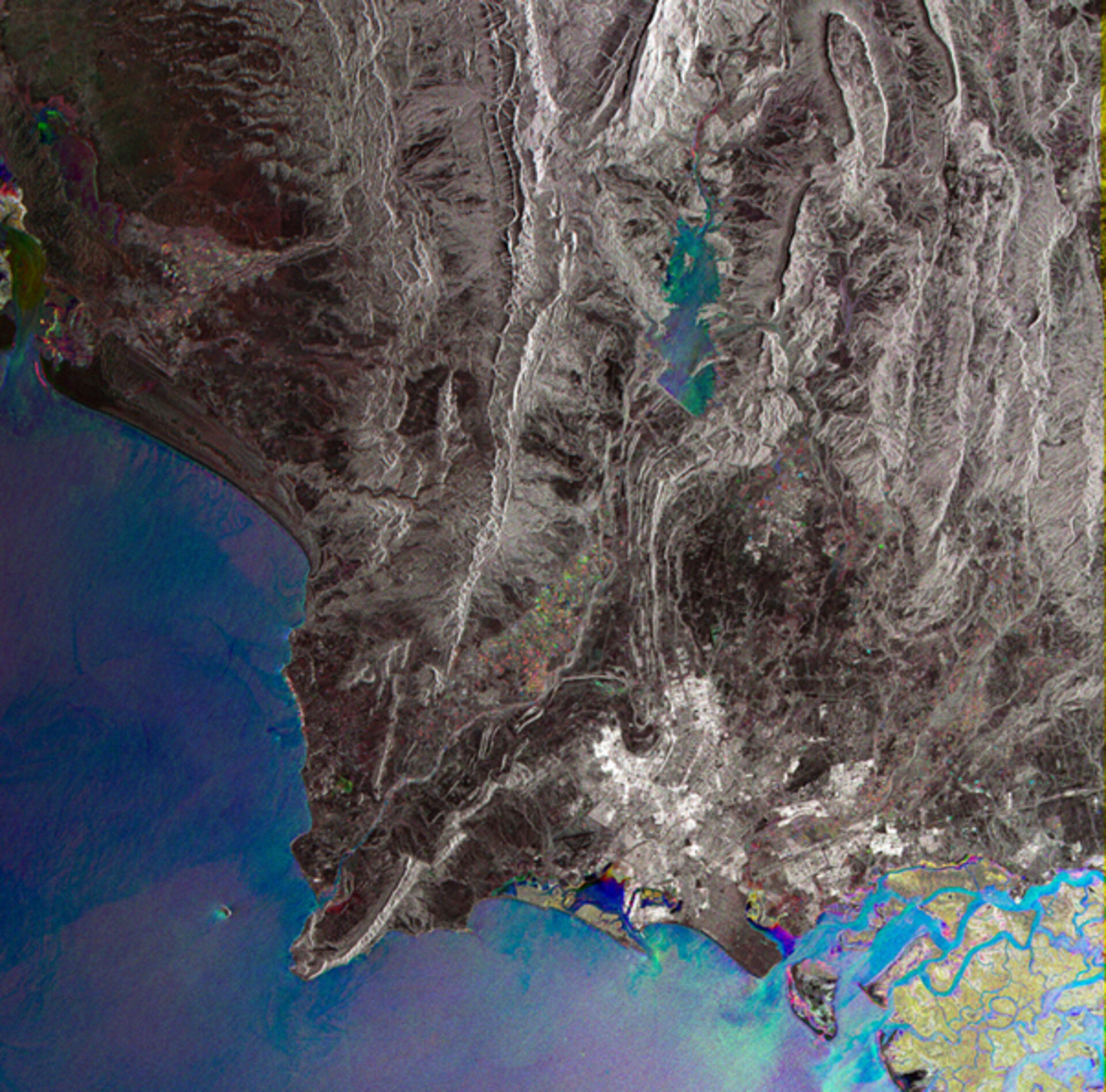 The Pakistani megacity of Karachi on the Arabian Sea is shown in this Envisat multitemporal radar composite.

Karachi is the largest urban area in Pakistan and the country's financial and commercial powerhouse. The capital of Sindh province, Karachi has a population of 15 million and this figure increases by around five percent a year. This megacity is experiencing multiple problems of growth: a lack of jobs, overcrowding and endemic poverty among its inhabitants.

Up to 40 percent of Karachi's inhabitants live in squatter settlements, many homes being of a semi-permanent or temporary nature. A third of all workers earn income below the poverty line. The reliability of Karachi's power supply is poor and its traffic chronically congested – the city currently lacks any mass transit system – with most Karachiites still going to the riverside each day to have their laundry washed.

Karachi was an unremarkable fishing village on the western edge of the Indus Delta when the British annexed Sindh in 1843. However its sheltered harbour - protected to its western side by the now-reclaimed Keamari Island, Manora Island and Oyster Rocks - and its location as the closest port to the Suez canal for Pakistan and Central Asia led it to prominence as a trading port with Europe.

Then the years following independence from Britain in 1947, Karachi served for 12 years as the capital of Pakistan – its population beginning its dramatic 30-fold increase from the independence level of up to half a million.

The most built-up parts of Karachi appear brightest in this radar composite. The lagoon of the Indus Delta appears to the east. Two rivers flow through the city itself, with the River Malir flowing from the northeast to the centre and on the east side, the River Liyari flowing north to south. Clifton beach, the curved stretch of coastline east of the port district, is one of the longest city beaches in the world.

This cultivation, and much of the city's continued growth, is made possible by Hub (Hab) Dam, the reservoir visible to the north of Karachi, created in 1981 by the damming of the Hub (Hab) River. The reservoir has an area of 80 square kilometres and a maximum depth of 9.6 metres. Around Hub Dam is the southern edge of the Kirthar Range of hills.

Because radar images measure surface texture rather than reflected light, there is no colour in a standard radar image.

Instead the colour in this image is due to it being a multitemporal composite, made up of three Advanced Synthetic Aperture Radar (ASAR) images acquired on different dates, with separate colours assigned to each acquisition to highlight differences between them: Red for 01 December 2003, Green for 28 June 2004 and blue for 19 April 2004.