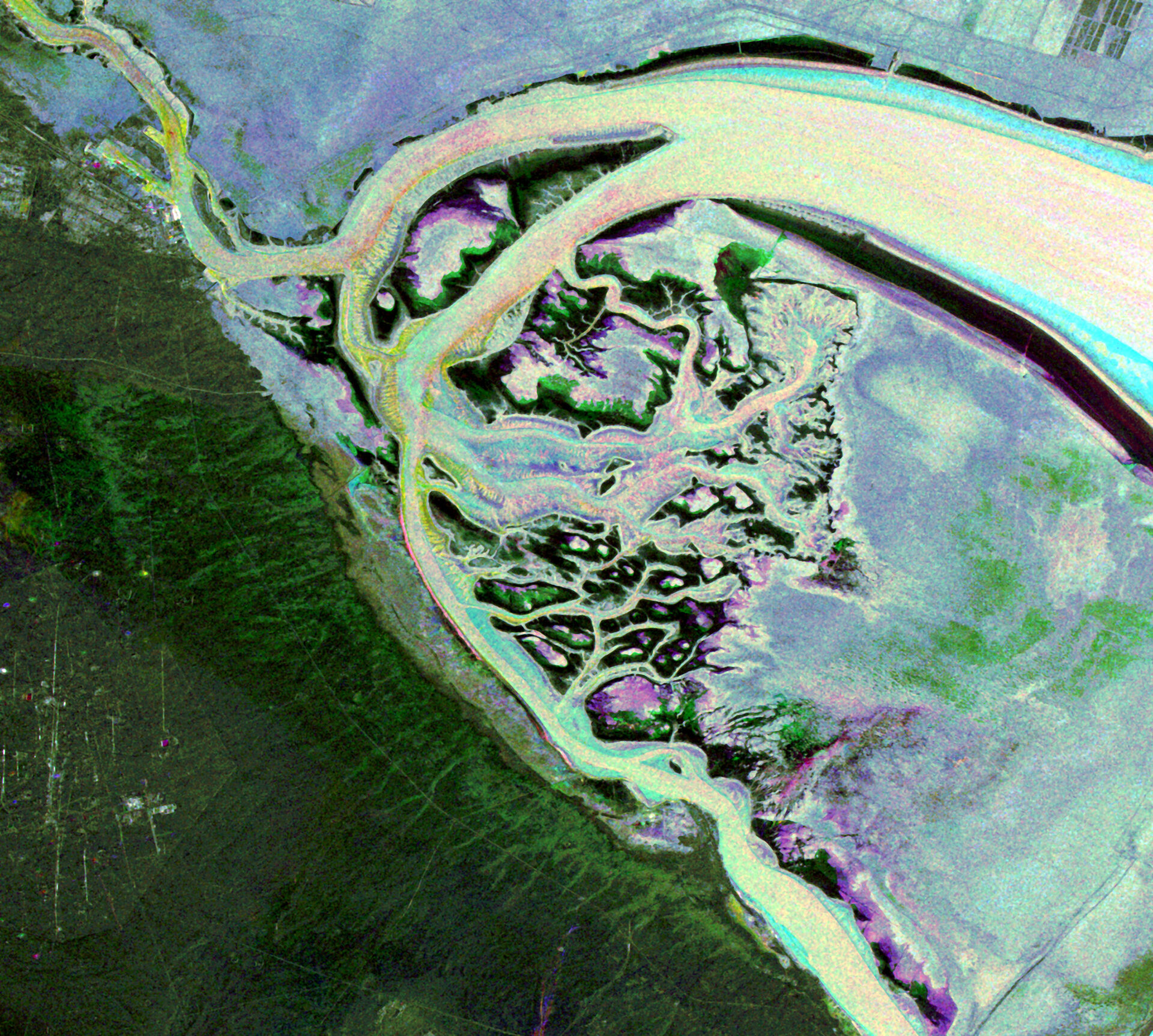 This Envisat image features the Kuwait islands of Warbah and Bubiyan, located at the head of the Persian Gulf.

What appears to be water across the top and right side of the image (lilac, green and blue) is land. The brighter yellow, aqua and pink colours represent water. Here, the water currents in these channels can be observed thanks to the radar imagery as they flow out into the gulf.

Measuring 30 km wide and 40 km long with an area of 863 sq km, Bubiyan (visible in the bottom right corner) is Kuwait's largest island. It is separated from the Kuwait mainland to the west by the narrow channel Khawr as Sabiyah (visible) and from the mainland in the northeast by the estuary Khawr Abd Allah (visible).

The topography of Bubiyan is flat and low, with the northwestern portion (deeply indented swampland) being partly submerged at high tide. The island has no permanent inhabitants.

Warbah Island (visible as an eye north of Bubiyan between the waterways) is located roughly 100 m east of the Kuwaiti mainland and 1 km south of the Iraqi mainland (across top right) near the mouth of the Shatt al-Arab, formed by the confluence of the Euphrates and the Tigris Rivers. Warbah is roughly 15 km long and 5 km wide with a total area of 37 sq km. Like Bubiyan, it is not inhabited.

The Tigris and Euphrates start near each other in the mountains of Turkey and flow parallel until they meet near the Persian Gulf. The area of the Tigris-Euphrates river system is called Mesopotamia, which translates as "between the rivers". Many historians consider this as the cradle of civilization.

Kuwait came to international prominence largely because of its enormous oil reserves, which the country reports to be about 104 billion barrels - about 8% of world reserves. The brightly-coloured area in the bottom left contains several oil fields, including the two major fields of Al Rawdatain and Sabriyah. The white lines extending from the oil fields are paved roads.

The image was created by combining three Advanced Synthetic Aperture Radar (ASAR) acquisitions (22 August 2009, 26 September 2009 and 31 October 2009) taken over the same area. The colours in the image result from variations in the surface that occurred between acquisitions.