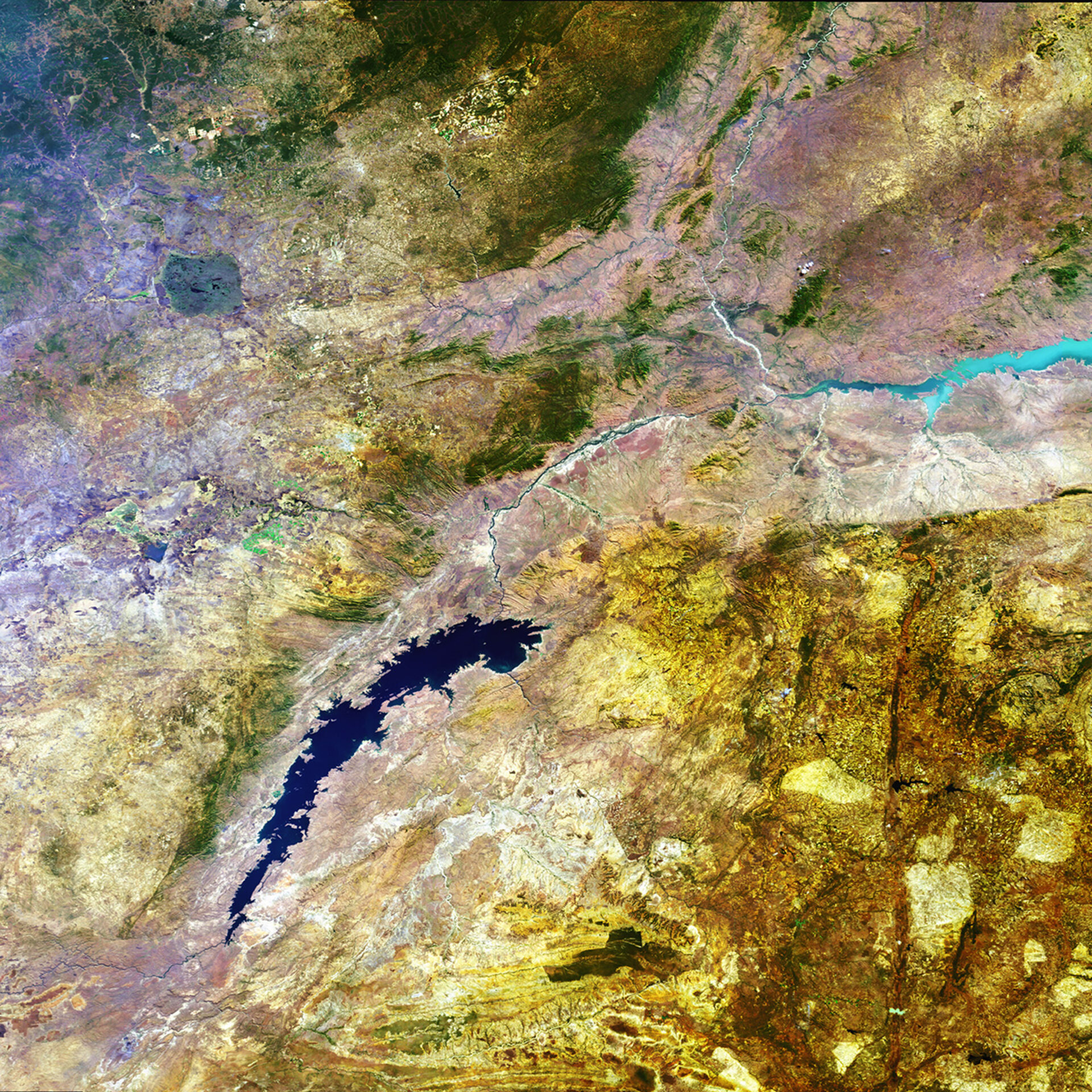 The narrow, man-made Lake Kariba, located along the border of Zambia and Zimbabwe, as seen by Envisat.

The 20th century was the great age of dam building, which did more than any other single human activity to change the face of our planet. Lake Kariba was created in the late 1950s by the construction of a largest dam wall across the Zambezi River running through the Kariba Gorge.

More than a million cubic metres of concrete were employed to build the 24-metre thick and 36.6-metre high wall, which was designed to sustain the pressure of nearly ten million litres of water passing through its spillway every second. It is located at the northernmost shore of Lake Kariba.

Jointly owned by the governments of Zambia and Zimbabwe, the dam was constructed to supply hydroelectric power to the then-British colonies, but today is also significant for fishing and recreational uses. Maximum water level was reached in 1963, some 700 animals being saved from floodwaters by a rescue operation called Operation Noah.

Today Lake Kariba is one of the largest dams in the world, with a surface area of 5580 square kilometres and an average depth of 29 metres, increasing to a maximum of 97 metres. It is 220 km long and in places up to 40 kilometres wide.

Its waters support more than 40 different species of fish – including the sardine-like kapenta, a protein-rich fish around which a local fishing industry has developed. In a rare example of a successful introduction of a non-native species to a lake, the kapenta - taken from Lake Tanganyika - has apparently had a minimal biological impact. Also present are hippo and crocodile, with elephant, buffalo, rhino and smaller animals abundant in the surrounding valley.

North of the eastern side of Lake Kariba is the Zambian capital of Lusaka, visible as a whitish area. Northwest of Lusaka is a noticeable square-marked grey feature which is the Lukanga Swamps, an ecologically important wetland region.

Over on the Zimbabwean shoreline is located Matusadona National Park – a notable safari park and home to endangered Black Rhinos - while above it in the Chizarira Hills is found the remote Chizarira National Park.

Follow the Zambesi River east to find another narrow lake, apparently shallower from its light-blue colour: this is Mozambique's 270-km-long Lago de Cahora Bassa (Cahora Basin Reservoir), which was dammed in the 1970s.

The Medium Resolution Imaging Spectrometer (MERIS) acquired this image on 6 June 2005, operating in Full Resolution mode with a spatial resolution of 300 metres. It covers an area of 672 by 672 kilometres.