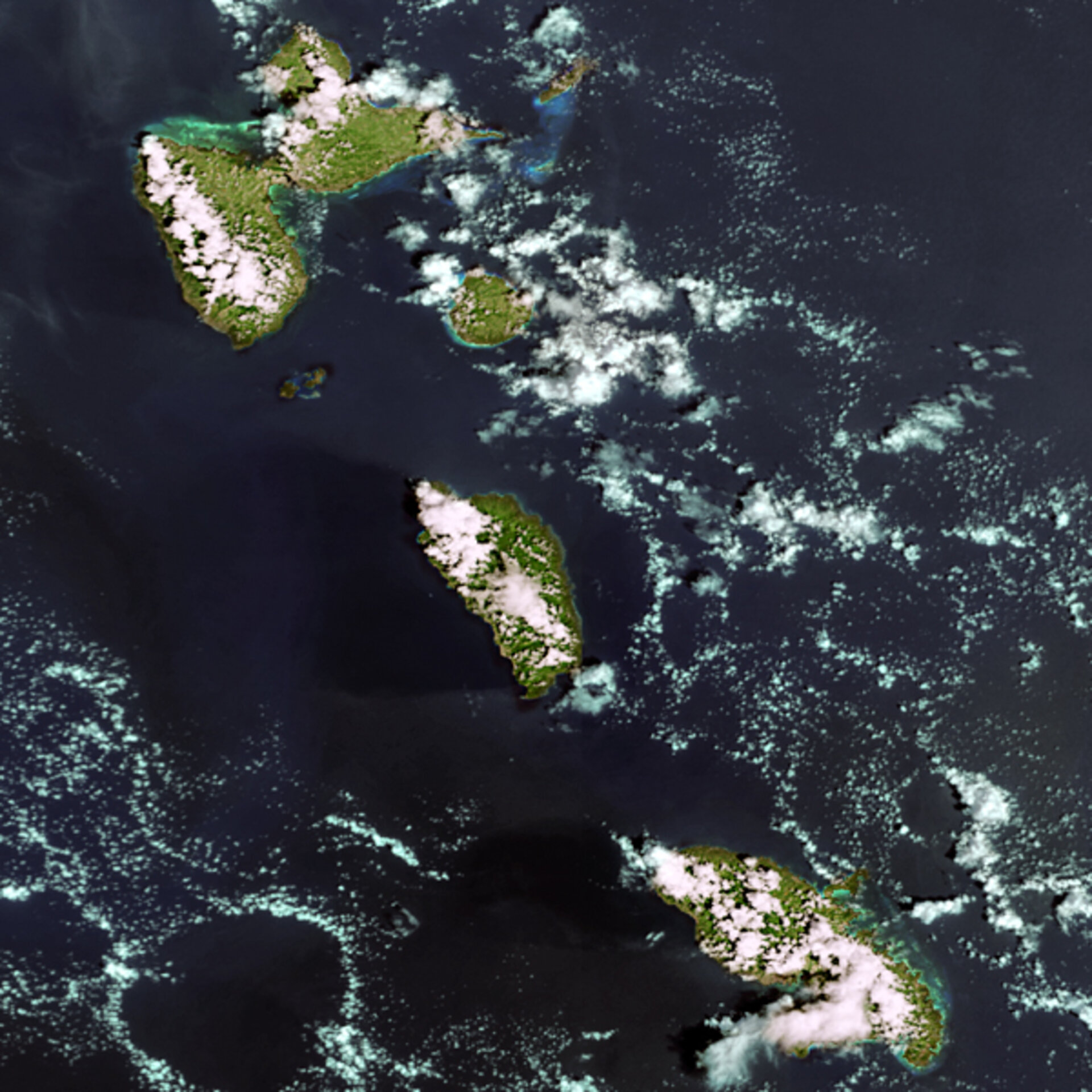 This Envisat view of the eastern Caribbean Sea shows the French Overseas Departments of Guadeloupe and Martinique. Between them is the independent state of Dominica.

Both of the French islands are equal in status to Departments of mainland France. They are represented in the National Assembly and form part of the European Union. Dominica gained independence from the United Kingdom in 1978.

The main butterfly-shaped Guadeloupe mainland is actually two islands divided by a narrow sea channel: Grand-Terre to the east and Basse-Terre, site of the capital of the same name. To the south are the island of Marie-Galante and the smaller Les Saintes islands.

Guadeloupe's main industries are agriculture – notably sugarcane and bananas - and tourism, due to its attractive coastal beaches and inland forests. Note the greenish-blue tinge around its coast, a sign of shallow waters. Much of the green Basse-Terre interior is made up of the Parc National de la Guadeloupe.

Dominica is predominantly agricultural, with a heavy dependence on banana exports. Its government is trying to boost the tourism industry. By comparison to its northern neighbour, Dominica is lacking in beaches but as the 'Nature Island of the Caribbean' it has an extensive natural park system including the Morne Diablotin National Park, centred on the tallest mountain in the region.

Dominica's volcanic landscape includes Boiling Lake, the second largest boiling fumarole lake in the world. It is located approximately ten kilometres east of the capital Roseau, which is on the west coast two thirds of the way down.

The popular tourist destination of Martinique is more urbanised than the other islands but almost a third of its area remains forested and large areas are turned over to the cultivation of pineapples, sugarcane and other crops. Its capital, Fort-de-France, is nestled on the westward side of the island, nestled in a bay of the same name.

Martinique is currently hosting the 2005 Ariane's Cup, an annual sailing boat circuit of the island open to teams from the European aerospace sector. There are 71 boats taking part in the race, due to end on 28 May, including teams from ESA, the French space agency CNES, the Italian Space Agency ASI, the German Aerospace Centre DLR, Eumetsat, EADS-Astrium, Alcatel and SPOT image.

This is a detail from a Medium Resolution Imaging Spectrometer (MERIS) image acquired in Full Resolution Mode on 14 October 2003. It has a spatial resolution of 300 metres and covers an area of 180 km by 180 km.