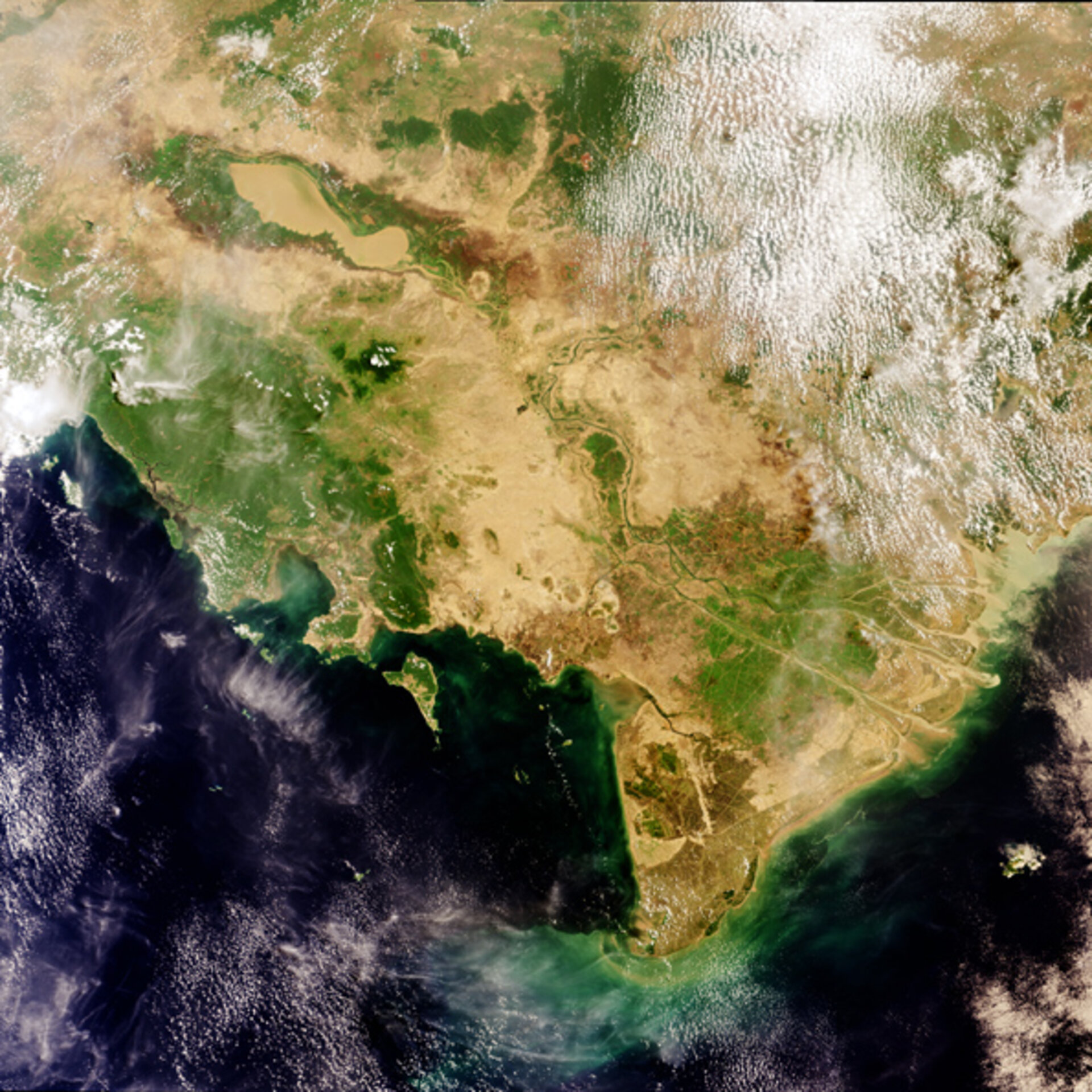 Vietnam's Mekong Delta, at the end of the world's twelfth longest river, as seen by Envisat during a rare almost cloudless day.

Arising in the Himalayas, the Mekong River flows through the territory of six nations on its 4000-kilometre journey to the South China Sea: China, Myanmar (Burma), Laos, Thailand, Cambodia and Vietnam. Its waters are estimated to support around 90 million people in total.

At the end of its course, the tropical wetlands of the Mekong Delta are supplied with rich alluvial deposits from the 475 000 cubic kilometres of water the River discharges each year. This Mekong River silt, clearly seen flowing out into the sea, also supports one of the world's great fisheries.

The soil of the Mekong Delta is sufficiently fertile that the area is home to 15 million people and Vietnam has become one of the world's leading rice exporters. Together rice and fish account for around 27% of Vietnam's Gross Domestic Product. The intense green of cultivated rice paddies can be seen across the Mekong Delta, threaded through by an intricate web of irrigation and drainage canals.

This image was acquired towards the end of the dry season. In the summer intense monsoon rains deluge this region. Resultant flooding changes the entire face of the landscape.

The elongated-kidney shaped Tonle Sap ('Great Lake') Lake in Cambodia - visible here toward the top-left side of the image, filled with sediment-rich water and its banks outlined by green - is swollen by floodwater driven to back-flow up the Mekong River into its Tonle Sap River tributary. The two Rivers meet at the location of Phnum Pénh (Phnom Penh), capital of Cambodia.

With the monsoon the area of the Tonle Sap Lake can extend by ten times or more, and by October much of low-lying central Cambodia is submerged. This event replenishes local wetlands and supplies fresh nutrients to forests and farmland. However the increasing population of this region may be at risk from waters surging unpredictably.

The Medium Resolution Imaging Spectrometer (MERIS) acquired this image on 8 April 2004, operating in Full Resolution mode with a spatial resolution of 300 metres. It covers an area of 672 by 672 kilometres.