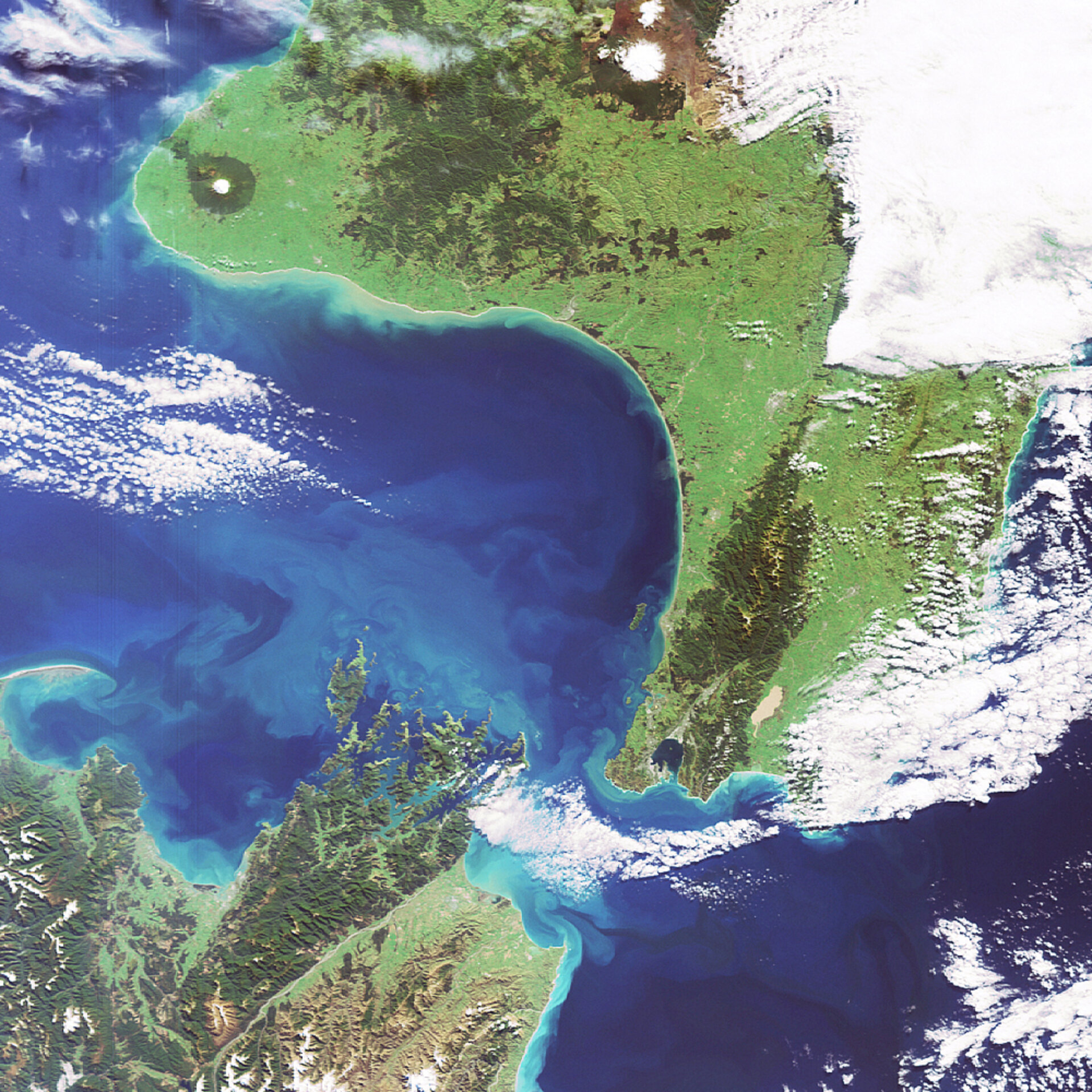 New Zealand, shown in this Envisat image, is located in the South Pacific Ocean and is comprised of two major islands – North and South – and a number of smaller islands.

As almost all the volcanoes on Earth occur near tectonic plate boundaries, it is no surprise volcanism has greatly affected New Zealand’s landscape. Volcanoes have also claimed more lives in than any other form of natural disaster, according Zealand’s Civil Defence. Volcanic activity occurs in six areas of the country – five in the North Island and one offshore to the northeast.

Two of the volcanoes in the North Island are visible as snow-capped circular features in the image: Mount Ruapehu, the North Island’s tallest peak at 2797 metres, is seen at the top centre, and Mount Taranaki, often referred to as Mount Egmont, is seen at the top left. Mount Ruapehu, an active volcano, last erupted in 1995 and 1996, sparking excitement as it threw rocks and ash into the air. Mount Taranaki is classed as dormant but is still considered an eventual risk hazard.

The impressive landscape of both mounts has attracted attention from movie directors: Mount Ruapehu was transformed into the fiery Mount Doom in the film ‘Lord of the Rings’, and Mount Taranaki served as the setting for the film ‘The Last Samurai’.

Satellite radar, such as that aboard Envisat and ERS-2, allows scientists to track small changes in the Earth’s movement that improves their ability to predict volcanic eruptions. Synthetic Aperture Radar Interferometry, InSAR for short, involves mathematically combining different radar images, acquired from as near as possible to the same point in space at different times, to create digital elevation models and reveal otherwise undetectable changes occurring between image acquisitions.

Satellite data are also very useful when an eruption begins. The synoptic view taken from optical and radar instruments can simultaneously show the ash plume, the ash falling area, the lava streams and the volcanic cone shrinkage or expansion. Atmospheric sensors are used to identify the gases and aerosols released by the eruption, and quantify their wider environmental impact.

This image was acquired on 10 September 2006 by Envisat’s Imaging Spectrometer (MERIS) while working in Full Resolution Mode to provide a spatial resolution of 300 metres.