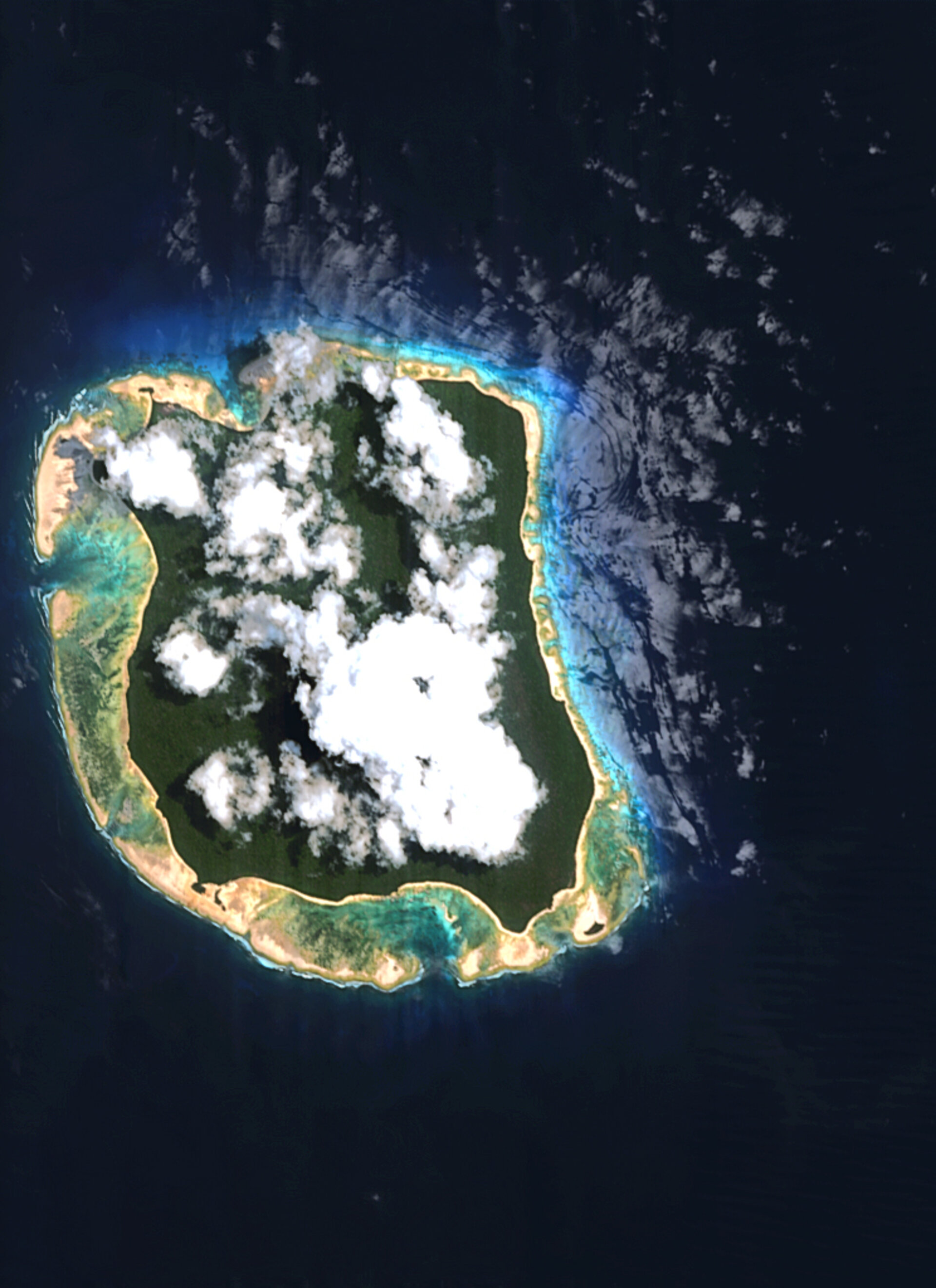 A cloudy day on North Sentinel Island in the Indian Ocean, home to the last small indigenous human tribe, as seen from ESA's Proba satellite.

The 8.9 Richter scale earthquake that triggered the Asian tsunami on 26 December 2004 had a lasting effect on this location, part of India's Andaman and Nicobar Islands chain.

The formerly submerged coral reefs that ring North Sentinel Island are now exposed to the surface, as the entire North Andamans group has experienced tectonic uplift. Circumstances were reversed to the south in the South Andaman and Nicobar Islands, where large land areas were submerged down to between one and four metres in depth.

The international collaborative programme CORDIO (Coral Reef Degradation in the Indian Ocean) estimates that these uplifted North Sentinel Island reefs are unlikely to survive, as either they are positioned too high for high tide to reach them or submerged too shallowly to tolerate the increased intensity of sunlight.

The 72-square-kilometre-area North Sentinel Island is home to the fiercely independent Sentinelese tribe, known to reject any contact with outsiders. The Indian government carried out its 2001 census of the Island from a distance, counting a total population of 21 males and 18 females, although other estimates range higher, to a maximum of 500.

DNA analysis of related Andaman tribesmen suggests that the Sentinelese are among the world's oldest communities, with generations going back 70 000 years. They retain a Palaeolithic way of life. The first record of North Sentinel Island comes from 1771, when a British surveyor reported night lights on the Island suggesting habitation.

The islanders would typically have been fishing when the tsunami struck. However post-tsunami surveys of North Sentinel Island suggest the tribe survived the disaster intact, perhaps retreating from the shore well before the waves hit.

It is possible that the Sentinelese are now suffering from the loss of their shallow water fishing grounds, with lagoons now vanished on all but the east side of North Sentinel Island: the shallow bluish water can be clearly seen.

There is no way to communicate with the inhabitants to know for sure. In the aftermath of the tsunami, one Sentinelese man came upon an Indian coast guard helicopter hovering – then fired an arrow its way.

This Compact High Resolution Imaging Spectrometer (CHRIS) image was acquired on 23 April 2005. Built by UK-based Sira Technology, CHRIS is the main payload on ESA's Proba microsatellite, designed to acquire hyperspectral images with a spatial resolution of 18 metres across an area of 14 kilometres.