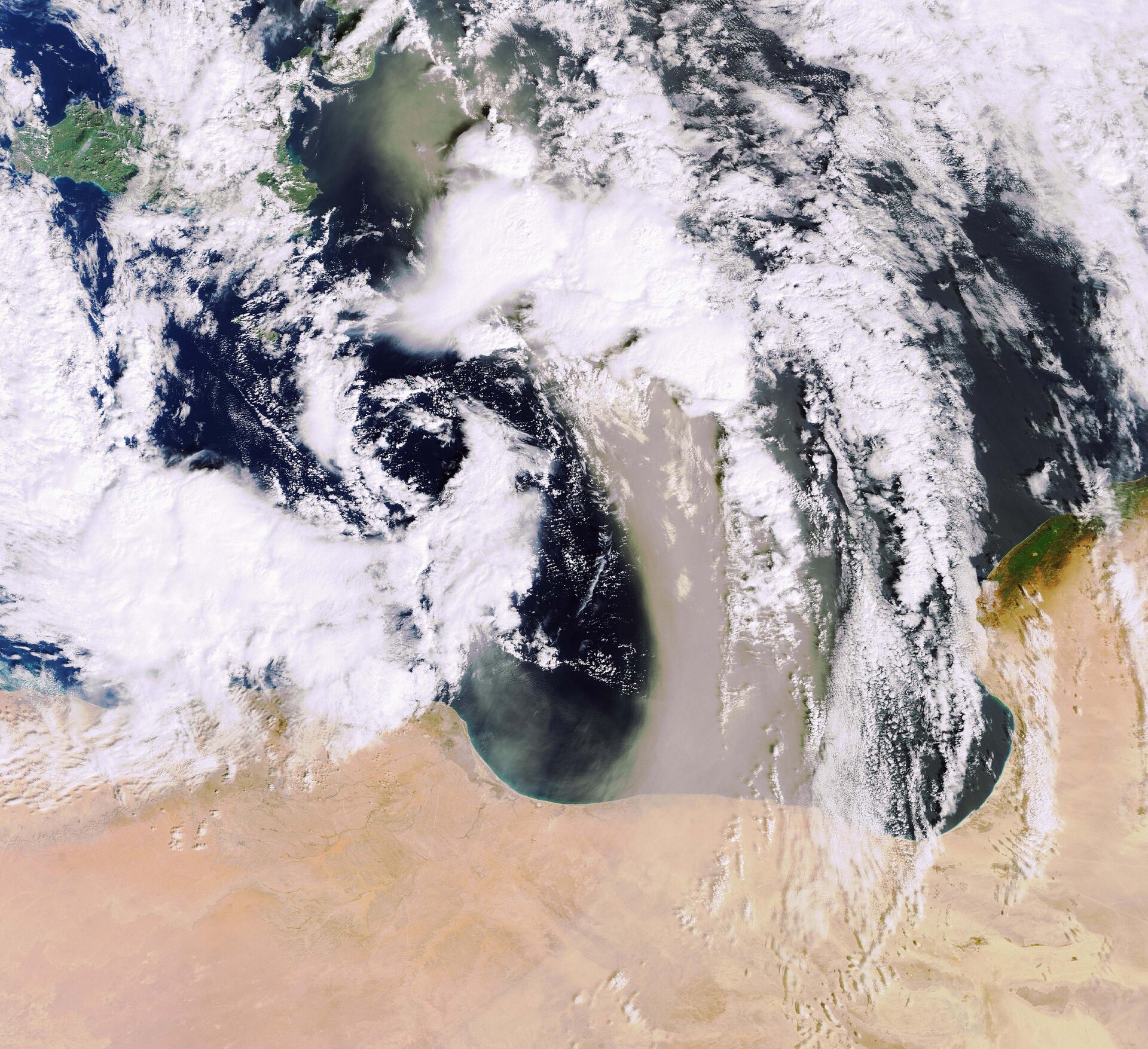 A strong wind blows sand and dust across the Mediterranean Sea from the Libyan Desert, located in the northeast section of the Sahara Desert, to Sicily and the southern tip of the Italian Peninsula on 10 February 2007 in this Envisat image.

Sandstorms are usually the result of atmospheric convection currents, which form when warm, lighter air rises and cold, heavier air sinks. The cold air in this image is visible stretching from the top left side of the image down to the centre and swirling back towards the north just above Libya (represented by the blue arrow in the image below), while the warm air current is seen blowing sand from south to north (represented by the red arrow).

Dust from the Sahara Desert can be transported over thousands of kilometres by convection currents, which also cause other meteorological conditions, such as thunderstorms (marked in the image below). Because the Sahara, where sandstorms are very common, is a major source of mineral dust, large concentrations of the dust can be found in the tropical Atlantic and the Caribbean.

Saharan dust plays an important role in the Mediterranean region because it is the major source of mineral nutrients for phytoplankton – the basic food on which all other marine life depends.

Sandstorms, or dust storms, are not always beneficial however. In the Caribbean, Saharan dust is believed to infect coral reefs with the sea fan disease. It is also thought to be linked to health risks, such as increased incidences of paediatric asthma attacks in the Caribbean and epidemics of lethal meningitis in the semi-arid sub-Saharan territory known as the Sahel belt.

Outbreaks of meningitis – an inflammation of the brain and spinal cord lining known to cause seizures and deafness in those victims it does not kill outright – occur throughout the world but are most common in the Sahel belt and often start in the early part of the dry season and decrease once the first rain comes. Because the exact correlation between the dust and spread of the disease is unknown, researchers use dust maps produced by satellite data to determine whether the hypothesis that the dry season – when wind-blown dust can fill the air – of the Sahel belt makes the 300 million inhabitants of the region much more vulnerable to meningitis.

Meningitis is caused by bacteria and although epidemiologists do not think the bacteria is spread directly by the dust, they hypothesise that the dryness caused by the dust irritates sensitive mucus membranes in the nose making local inhabitants more vulnerable to bacterial infection. The ESA-funded Epidemio project, which ran from January 2004 to April 2006, provided dust maps of the area to help pinpoint climatic conditions favourable for the spread of such epidemics so that aid workers would know when people were at greatest risk and be able to provide early warnings.

This image was acquired by Envisat’s Medium Resolution Imaging Spectrometer (MERIS) instrument while working in Full Resolution mode to provide a spatial resolution of 300 metres.