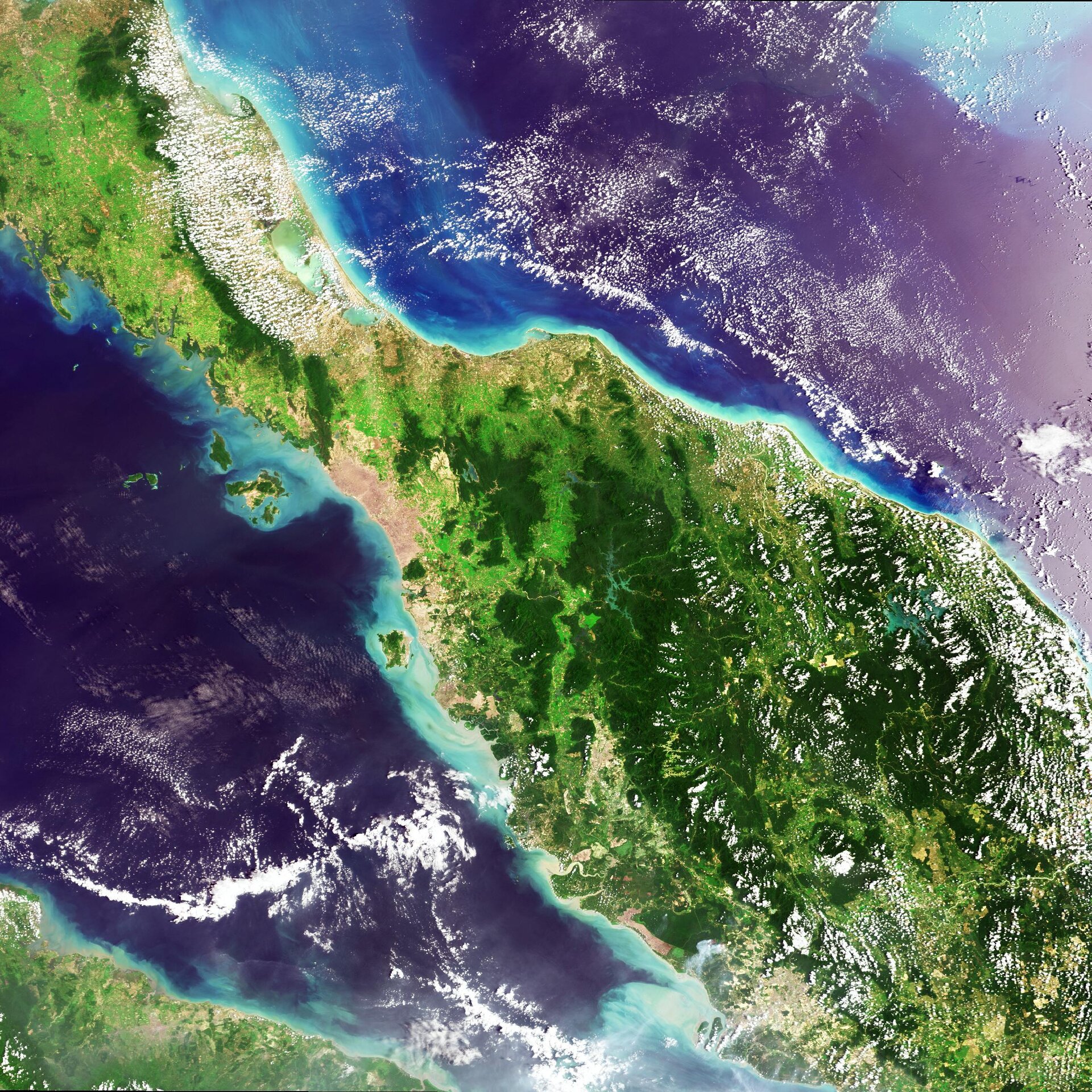 The Malaysian Peninsula, the southern extremity of the Asian continent, is shown in this Envisat image.

Malaysia is comprised of West Malaysia (the Malaysian Peninsula), formerly known as Malaya, and East Malaysia, which are separated some 600 kilometres apart by the South China Sea.

The peninsula lies between the Andaman Sea of the Indian Ocean and the Strait of Malacca on the west and the Gulf of Thailand and the South China Sea on the east. It is bordered on the north by Thailand and on the south by Singapore (separated by the Johore Strait).

Most of Malaysia is covered by forests, ranging from lowland hardwood forests, heath forests and mountain forest. Around 2 500 species of trees are found in the forests, which provide many types of wood, including ebony, sandalwood and teak. The number of flowering plants and ferns found in the forests are estimated to be around 8 500. Although rubber trees – introduced by Brasil – are not endemic to Malaysia, it is the world’s largest rubber producer.

Around 450 species of birds are native to Malaysia and many migrating species winter there. Among the most famous are the hornbills, native to Sarawak. Other bird species include egrets, herons, kingfishers, kites, mynahs and pheasants.

The Orang-utan, one of the world's most endangered animals, is also unique to this part of the world. Found only in Sumatra and Borneo, the Orang-utan is the only great ape living naturally outside Africa. Malaysians call the ape ‘Orang Hutan’ which in English translates to ‘People of the Forest’. Their survival is constantly threatened by forest fires, felling of trees, poaching and illegal hunting.

Malaysia is also home to rhinoceroses, elephants, bears, crocodiles, leopards, monkeys and panthers. Seven turtle species have been recognised living in the world's oceans. Out of these species, four nest on Malaysian shores – the olive-ridley turtle, the hawksbill turtle, the green turtle and the leatherback turtle – and are all currently listed as endangered by the World Conservation Union (IUCN).

A system of National Parks has been established to help preserve the country's flora and fauna. Sarawak’s Gunung Mulu National Park, the largest national park covering 52 865 hectares of primary rainforest, and Sabah’s Kinabalu Park have been deemed World Heritage sites by the United Nations’ Educational, Scientific and Cultural Organization (UNESCO). A labyrinth of caves, including the limestone cave with the largest chamber in the world, lies beneath the Gunung Mulu National Park.

This image was acquired on 23 February 2005 by Envisat’s Medium Resolution Imaging Spectrometer (MERIS) working in Full Resolution mode to provide a spatial resolution of 300 metres.