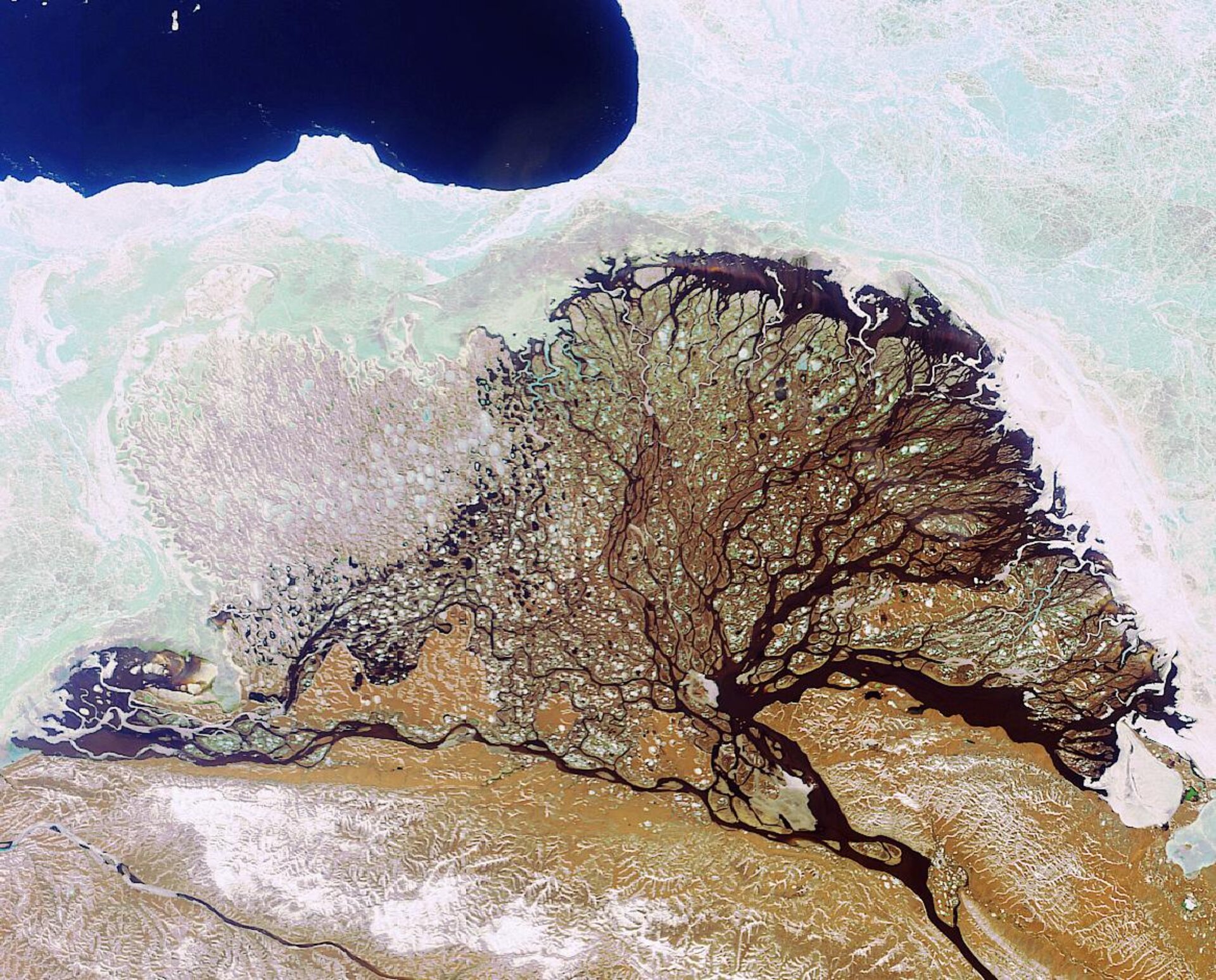 Russia’s Lena River, Lena River Delta and the Laptev Sea are highlighted in this Envisat image acquired on 15 June 2006.

At 4 400 kilometres long, the Lena River is one of the largest rivers in the world and is the longest in the Russian Federation. The river forms from a small mountain lake in southern Russia and flows north to the Laptev Sea in Northern Siberia.

Beginning in mid-October, the river starts to freeze and by late April the ice begins drifting away. As the ice breaks up water levels rise suddenly, increasing the chances of flooding. In May 2001, for instance, ice jams forced water out of the river bed causing the water level to rise to some 19 metres, washing a part of the eastern Siberian town of Lensk away. According to Doctors Without Borders/Médecins Sans Frontières (MSF), some 17 000 people lost their homes.

By mid-June, the Lena river waters have usually thawed and are flowing to the Laptev Sea. The Lena splits into several small rivers before reaching the sea, and these rivers flow through a flat plain creating the Lena River Delta – a 32 000-square-kilometre haven for Arctic wildlife. In 1995, a protected area called the Lena Delta Reserve was expanded to protect numerous species of fish and birds, making it the largest protected area – 61 000 square kilometres – in Russia. The area hosts many other nature reserves, including the Lena Pillars, Muna, Ust-Viluisky, Beloozersky, Belyanka and Ust-Lensky.

The largest Delta in the Arctic, the Lena River Delta is a complex landscape that has evolved over thousands of years. The whole delta area has been nominated as a UNESCO (the United Nations’ cultural agency) World Heritage Site.

The delta’s snow-covered tundra is frozen for approximately seven months a year before transforming into fertile wetlands. The tundra, which floods each spring, is an important area for nesting and migrating birds. Tundra wetlands are considered major contributors to the global carbon balance and are believed to be highly sensitive to climate change.

Earth Observation can assist with quantifying carbon budgets in the vast Lena River Delta tundra wetlands by helping to validate tundra surface and vegetation unit classification. Europe’s first polar-orbiting satellite dedicated to operational meteorology, MetOp-A, set to launch on 17 July 2006, will carry onboard the Advanced Very High Resolution Radiometer (AVHRR/3) instrument, provided by the United States’ National Oceanic and Atmospheric Administration (NOAA), which will measure sea-surface temperature, ice, snow and vegetation cover and allow for tundra in ecosystems to be studied and monitored.

The MetOp programme was jointly established by ESA and the European Organisation for the Exploitation of Meteorological Satellites (EUMETSAT), forming the space segment of EUMETSAT's Polar System (EPS).

Envisat's Medium Resolution Imaging Spectrometer (MERIS) instrument acquired this image working in Full Resolution mode to provide a spatial resolution of 300 metres. The image has a width of 350 kilometres.