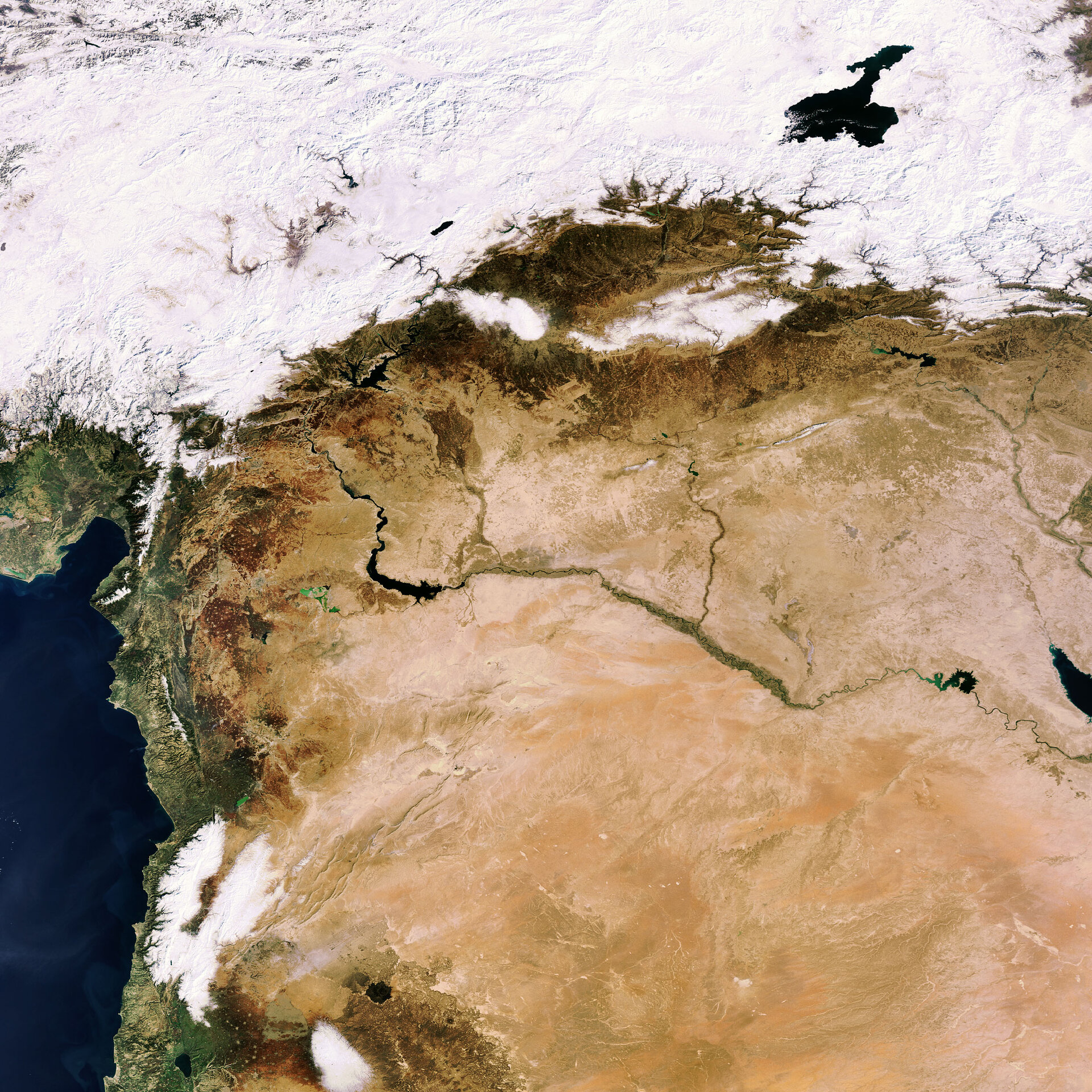 This Envisat image features countries of the Middle East, including Turkey, Syria, Lebanon, Israel and Iraq.

The dark blue body of water peeping through the snow in the upper right hand corner is Lake Van. Covering an area of 3713 sq km, it is the largest body of water in Turkey (snow covered) and the second largest in the Middle East. Its salty water makes it unsuitable for drinking or irrigation.

A part of the well-wooded Taurus Mountain Range is visible beneath Lake Van. Located to the east of the visible mountains is the Ataturk Dam, the largest in a series of 22 dams and 19 hydroelectric stations built on the Euphrates (visible flowing through the middle of the image) and Tigris Rivers.

With a length of 2700 km, the Euphrates is the longest river in western Asia. It rises in the mountains of eastern Turkey, flows southeast across Syria (visible beneath Turkey) and makes its way through western and central Iraq, where it unites with the Tigris (seen on the right above the partially visible dark blue body of water) before continuing its journey to the Persian Gulf.

The majority of the tan-coloured area in the image represents the Syrian Desert – a combination of true desert and steppe – that extends over a vast area, including modern Syrian, Jordan and Iraq. The famed Arabian horses are raised along the edges of the desert.

The snow-clad mountains visible in the lower left hand corner are the Lebanon Mountains, which run parallel to the Mediterranean for some 240 km, nearly the entire length of Lebanon.

Israel’s largest freshwater lake – the Sea of Galilee – is visible beneath the Lebanon Mountains. The lake is located 209 m below sea level, making it the lowest freshwater lake on Earth and the second lowest lake after the Dead Sea, which is saltwater.

This image was acquired by Envisat's Medium Resolution Imaging Spectrometer (MERIS) instrument on 4 February 2008, working in Full Resolution mode to provide a spatial resolution of 300 metres.