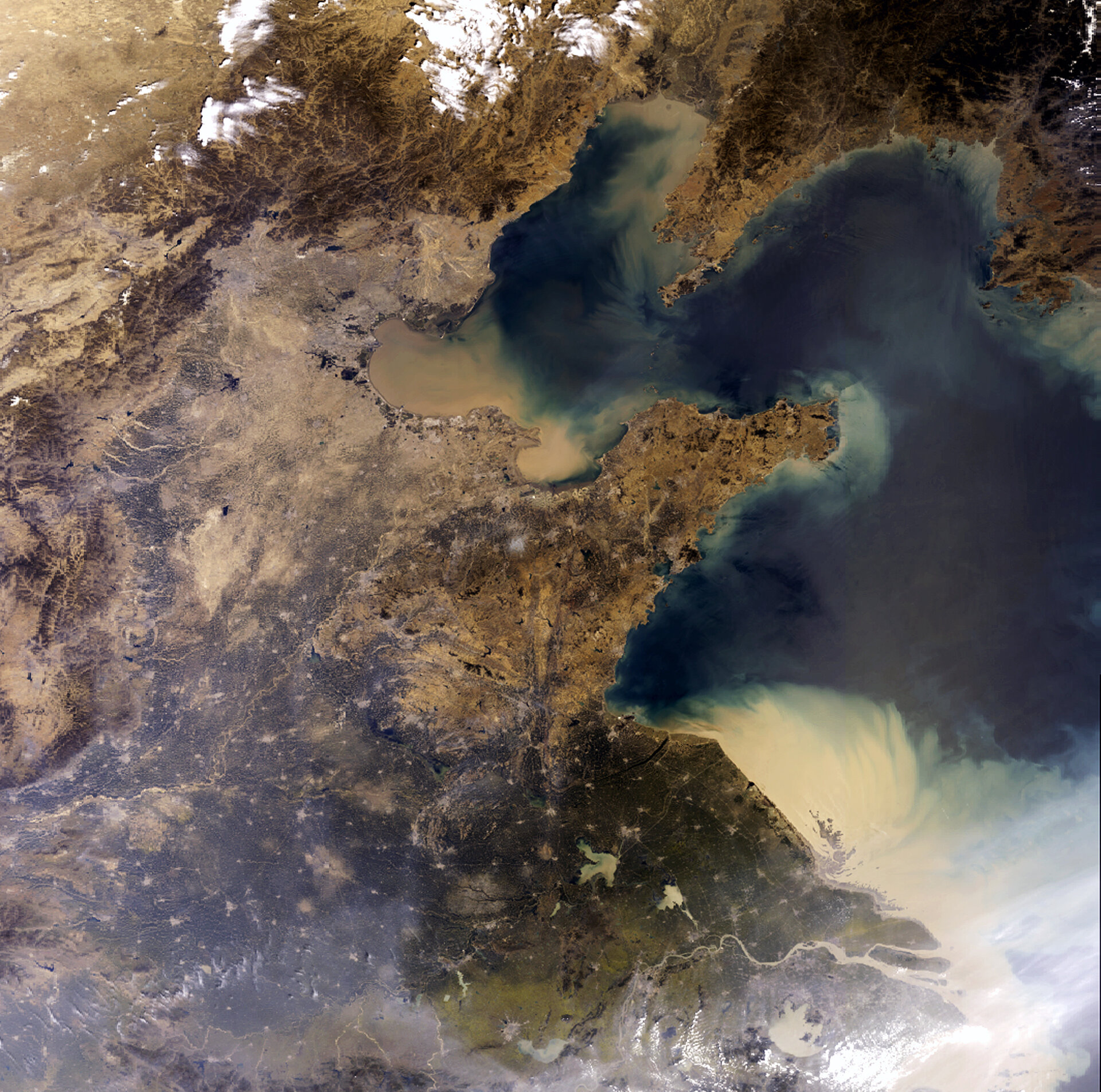 The Yellow Sea, bordered by China, North Korea and South Korea, is shown in this Envisat image. Named for the yellowish sand – which originates from the Yellow River – that colours its water, the Yellow Sea is one of the largest shallow areas of continental shelf in the world with an average depth of 44 metres and a maximum depth of 152 metres.

Also referred to in China as Huang Hai and in North and South Korea as the West Sea, the Yellow Sea is 870 kilometres long and 556 kilometres wide. An arm of the Pacific Ocean, the semi-enclosed sea merges with the East China Sea, located off the eastern and south-eastern coasts of Asia.

The Yellow Sea is bordered on the west and north by the Chinese provinces Hebei, Tianjin, Shandong and Liaoning. The peninsulas seen in the image extending inwards into the sea are Shandong (left) and Liaodong (upper right). In the north, the sea forms the Bo Hai Bay in the northwest and the Korea Bay in the northeast (the area just below Liaodong Peninsula).

The climate of the sea fluctuates due to winter and summer Monsoon conditions, with the sea surface temperature changing as much as 10 degrees Celsius. In the summer warm currents are present, while the water becomes very cold in winter and can cause parts of the inner sea to freeze over.

The Yellow Sea is one of the most developed economic areas in North China with coastal farming, maritime trade and traffic and fisheries. Many species of fish, such as chub, Spanish mackerel and Pacific herring, and invertebrates, such as Chinese mitten crabs, live in the area.

In July 2002, World Wildlife Fund (WWF)-Japan and China, Wetlands & Birds Korea and the Wetlands International-China Programme launched a joint project to conserve biodiversity in the Yellow Sea. As part of its Ecoregion conservation programme – which operates beyond national boundaries – WWF selected the Yellow Sea as an ‘outstanding example of coastal marine ecosystems.’

According to WWF, the Yellow Sea supports dugong and Dall's and Harbor porpoises, as well as newly discovered species of goby fish. The sea is also home to leatherback, green, hawksbill and Ridley turtles.

This image was acquired by Envisat’s Medium Resolution Imaging Spectrometer (MERIS) on 13 April 2005. It has a width of 1774 kilometres.