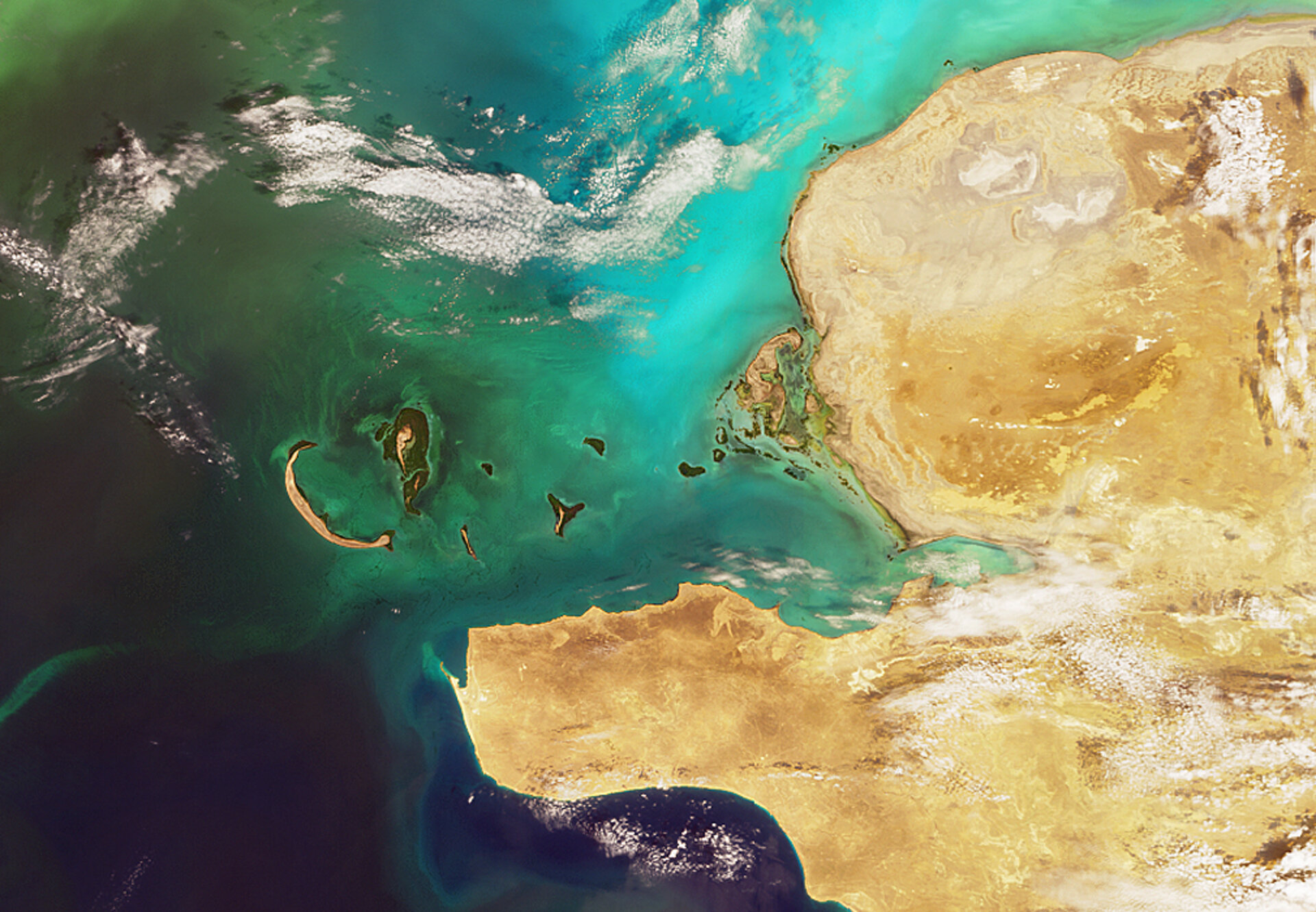 With an area of 2.7 million square kilometres, Kazakhstan is the ninth-largest nation in the world – the size of Western Europe. It borders Russia to the north, China to the east, Kyrgyzstan, Turkmenistan and Uzbekistan to the south and the Caspian Sea to the west. Prior to gaining independence in 1991, Kazakhstan was part of the former USSR.

The Mangyshlak Peninsula (the tip of which is seen in the lower left across from the half-moon shaped island) is often referred to as a treasure peninsula because it has a wealth of mineral deposits, including coal, iron ore, copper, zinc, uranium and gold.

Petroleum and natural gas, however, are the main riches of the peninsula. Production of oil in Mangyshlak is expected to increase with the planned sinking of new oil wells in Buzachi, located in the northernmost cape of Mangyshlak. Advanced methods of oil extraction are needed in Buzachi because the oil’s high viscosity makes it difficult to extract, despite it occurring at relatively small depths of 300-1 000 metres.

In 2001, the Caspian Consortium pipeline opened from western Kazakhstan's Tengiz oilfield to the Black Sea. And work has begun, in cooperation with China, on the construction of an oil pipeline that will extend from the Caspian coast eastward to the Chinese border.

Also located in Kazakhstan is the Baikonur Cosmodrome, the Russian-operated space launch facility, in the south-central part of the country about 200 km east of the Aral Sea near the town of Tyuratam. The former Soviet Union intentionally gave the launch facility the misleading name of Baikonur, which is a mining town located about 320 km northeast of the space centre, to conceal the actual location of the site.

The Baikonur Cosmodrome will be the launch site of MetOp-A, developed by ESA in collaboration with the European Organisation for the Exploitation of Meteorological Satellites (EUMETSAT). Scheduled to launch on 17 July 2006, MetOp-A will be Europe's first polar-orbiting satellite dedicated to operational meteorology.

This image was acquired by Envisat’s Medium Resolution Imaging Spectrometer (MERIS) in August 2005.