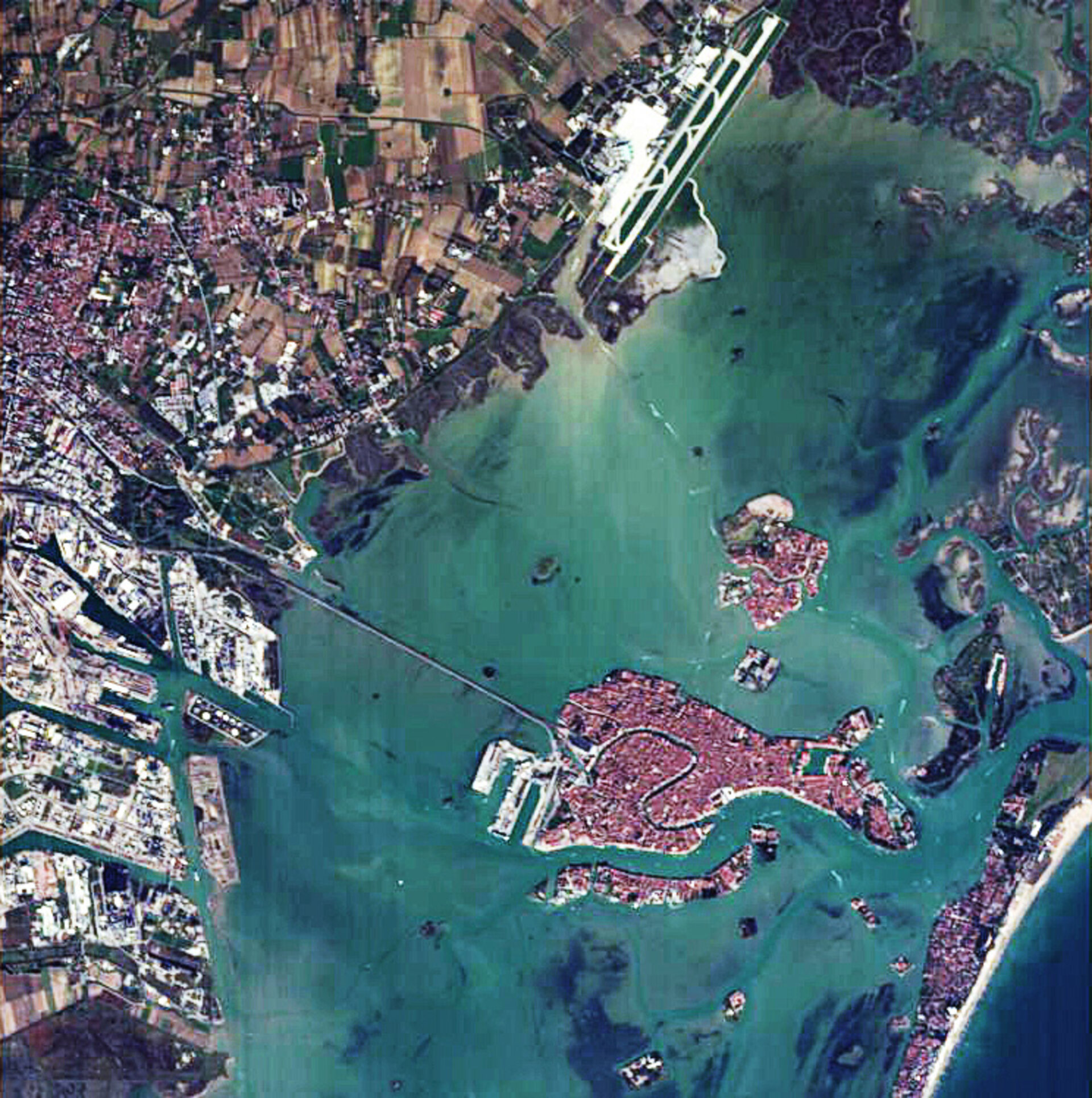 The canal city of Venice (Venezia) and the Laguna Veneta are shown here by ESA's microsatellite Proba.

Venice and its lagoon were made a UNESCO World Heritage Site in 1987. The entire city is an architectural masterpiece in which even the smallest building contains works by some of the world's greatest artists.

Refugees from the Po Estuary fleeing foreign invaders founded the city in the 5th Century AD. In later centuries Venice became part of the Byzantine Empire, then an independent city-state and a major maritime power in its own right.

Venice extends across 118 small islands in a marshy saltwater lagoon at the northwest corner of the Adriatic Sea. A series of barrier islands protect this low-lying city from storm surges, but its 270 633-strong population still must contend with a metre-high tidal range, a problem made worse by regional land subsidence and a slight increase in sea level.

In the famous flood of 1966 waters rose to almost two metres above sea level, and flooding occurs regularly these days – between September 2000 and March 2001 alone, more than 40 floods were recorded.

The S-curve of the main Grand Canal is clearly visible, dividing the fish-shaped city in two, with the larger Canal Giudecca and Venice's modern port facilities to its west. The famous landmark of St Mark's Square is visible where the Grand Canal meets the Canal Giudecca.

Adjacent to the port and the railway station beside it is the road and rail causeway linking Venice with the mainland, where, at the top of the image, can be seen Venice Airport.

Just above Venice proper is located the cemetery island of San Michele, where Venetians have been laid to rest for the last two hundred years. Next to it is the glass-making centre of Murano, to the east of which is the lacework centre of Burano, linked by bridge to the smaller island of Mazzobro.

Beside it on the eastern edge of the image is Torcello, in the 10th century a trading centre larger and more powerful than Venice with a population of 10 000 people but gradually declining in the intervening centuries as its waters turned into swampland and the resulting malaria struck the population. Its abandoned buildings were used as a source of stone for Venice and Murano. Today only about 60 people live there.

This image was acquired on 11 November 2004 by the Compact High Resolution Imaging Spectrometer (CHRIS). Built by UK-based Sira Technology, CHRIS is the main payload on ESA's Proba microsatellite, designed to acquire hyperspectral images with a spatial resolution of 18 metres across an area of 14 kilometres.