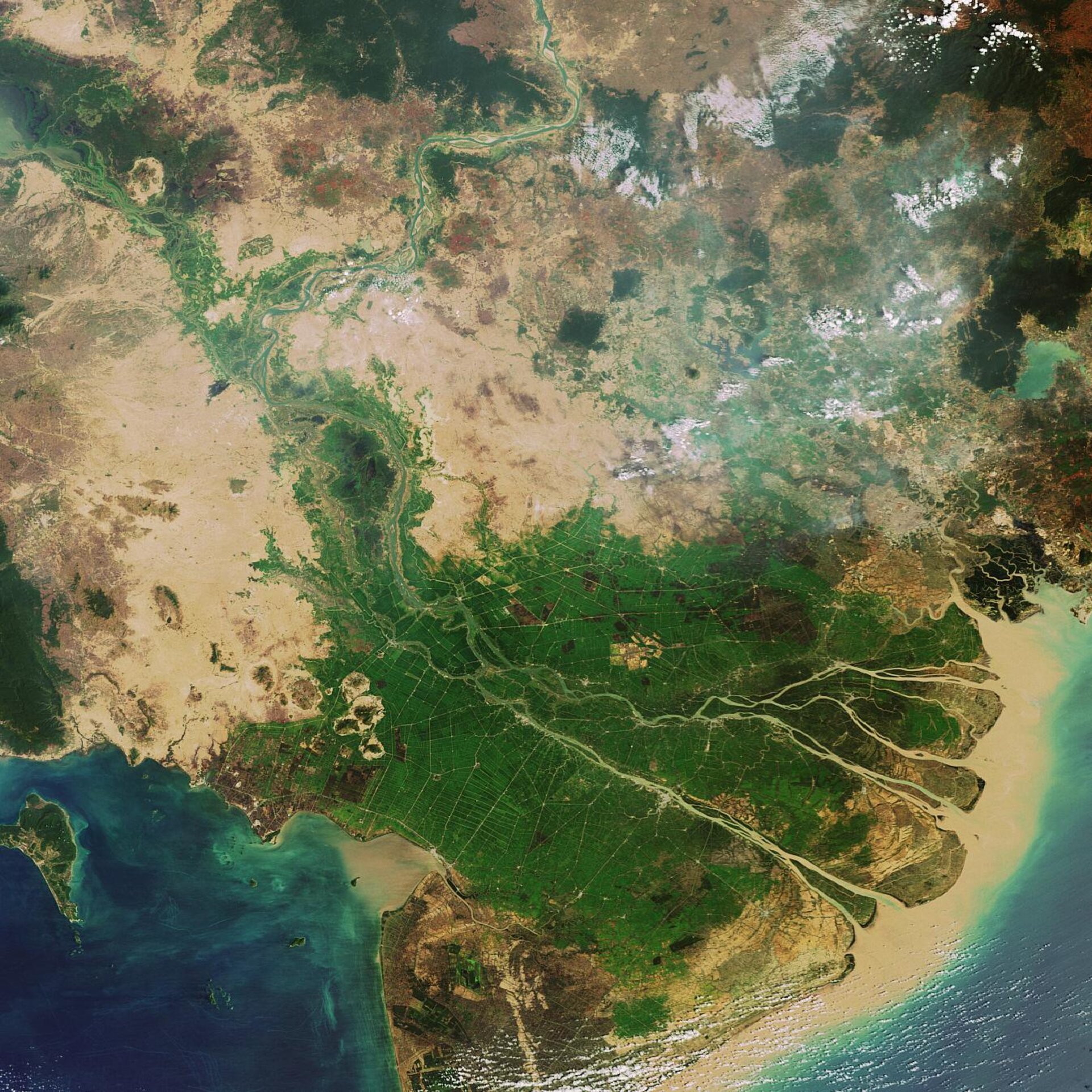 Vietnam's Mekong Delta, located on the Indo-China Peninsula, is highlighted in this Envisat image. The delta’s water source is the longest river in Southeast Asia, the seventh longest in Asia and the twelfth longest in the world – the Mekong.

Arising in the Himalayas, the Mekong River flows through the territory of six nations on its 4800-kilometre journey to the South China Sea: China, Myanmar, Laos, Thailand, Cambodia and Vietnam. Its waters are estimated to support around 90 million people in total.

The Mekong River splits into nine arms, with all flowing down and emptying into the sea. Because of this, the Vietnamese refer to it as Cuu Long, ‘the nine-tailed dragon’.

According to the Intergovernmental Panel on Climate Change (IPCC) report entitled ‘Impacts, Adaptation and Vulnerability’, agreed upon on 6 April, this area will experience impacts in the future as a result of global warming.

"Glacier melt in the Himalayas is projected to increase flooding, rock avalanches from destabilised slopes and affect water resources within the next two to three decades," the report states.

At the end of its course, the tropical wetlands of the Mekong Delta are supplied with rich alluvial deposits from the 475 000 cubic kilometres of water the river discharges each year. This tannish-coloured silt is clearly seen flowing out into the sea.

The soil of the Mekong Delta is sufficiently fertile that the area is home to 15 million people and Vietnam has become one of the world's leading rice exporters. The intense green of cultivated rice paddies can be seen across the Mekong Delta, threaded through by an intricate web of irrigation and drainage canals.

Throughout history, the delta’s wetlands have provided the ideal environment for rice cultivation and offered protection from monsoons. However, like the Mississippi River Delta, the wetlands are being drastically reduced by natural and man-made factors leaving the area more exposed to intense monsoon rains and resulting in the disappearance of indigenous flora and fauna.

This image was acquired on 6 February 2007 by the Medium Resolution Imaging Spectrometer (MERIS) instrument operating in Full Resolution mode with a spatial resolution of 300 metres.