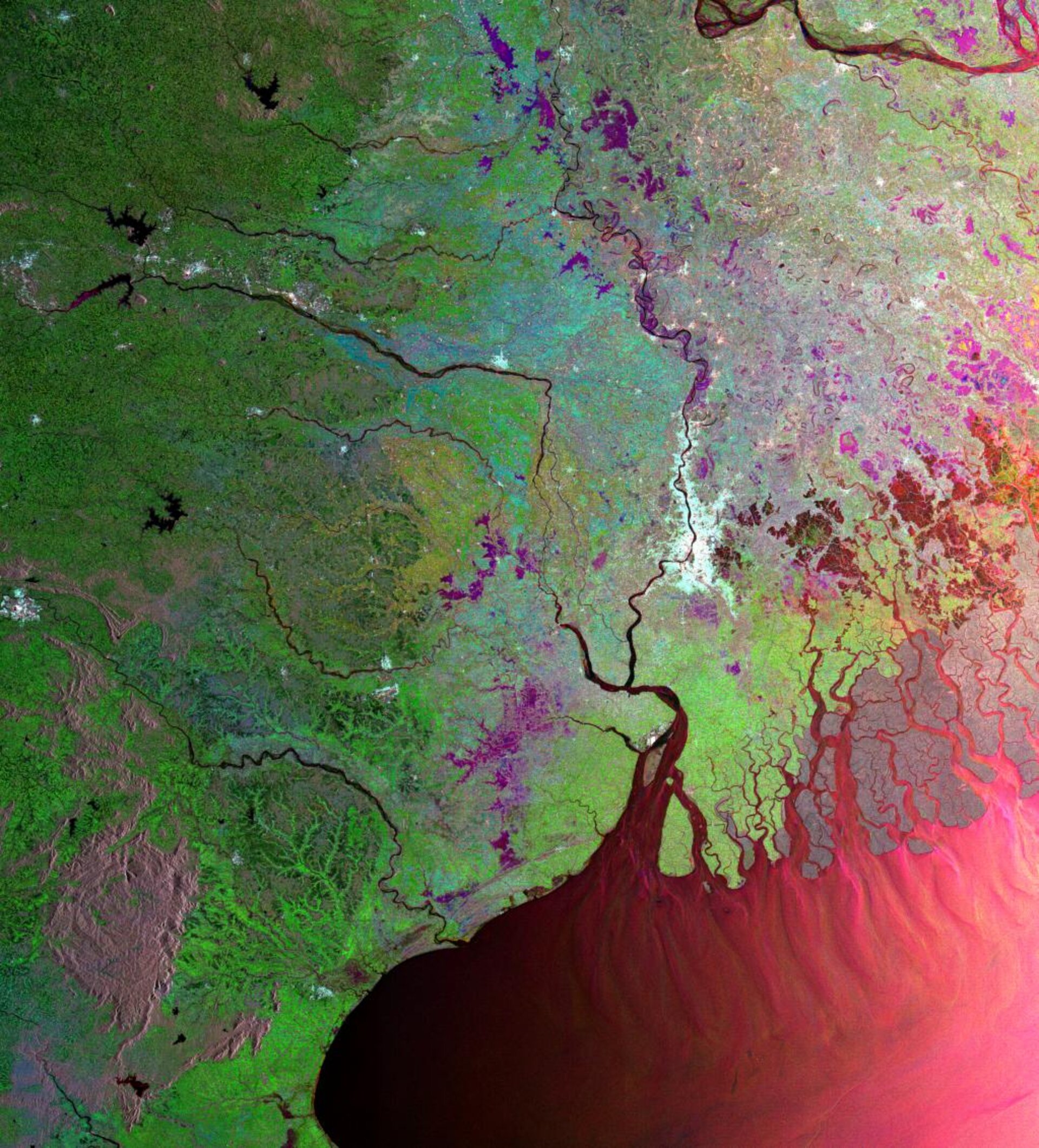 This colourful view of West Bengal in India, centred on the megacity of Kolkata (Calcutta), is actually a composite of three separate radar images acquired at different times.

West Bengal is a state in the eastern region of India, with most of its territory covered by fertile, highly-vegetated plains and its climate influenced by the Southeast Asian monsoon. Down to the coast can be seen the Sundarbans, the Indian portion of the Ganges Delta, the largest river delta in the world.

Home to the famed Bengal Tiger and a UNESCO World Heritage Site, the Sundarbans consists mainly of forest and low islands divided by river estuaries and tidal creeks along the Bay of Bengal. It stretches more than 100 kilometres (62 miles) inland, and the forests in the north merge into estuarine mangrove forest in the south.

The swirl patterns seen along the northern coastline of the Bay of Bengal indicate that sedimentation is being deposited from the rivers of the Ganges Delta.

The large whitish area is the sprawling city of Kolkata (its name officially changed from Calcutta in 1999) which is one of the largest urban settlements in the world, with 13.2 million inhabitants counted in the 2001 census.

Growing from the small village of Kalikata on the River Hooghly, a tributary of the Ganges, the city found prominence after an agency of Britain's East India Company was established nearby in 1690. The capital of West Bengal, Kolkata became the largest urban agglomeration in India, until Mumbai (Bombay) took the lead around 1985.

Despite some serious infrastructure problems due to its population density, Kolkata remains the major economic centre for eastern India, with a large variety of heavy and light industry, investment from many international and Indian firms, and the Kolkata stock market being second in importance after Mumbai.

Today the city expands over 80 kilometres north to south and 10 to 25 kilometres east to west. Built-up areas show up brightly when seen via radar.

Because radar images represent surface backscatter rather than reflected light, there is no colour in a standard radar image. Instead the colour in this image is due to it being a multitemporal composite, made up of three Advanced Synthetic Aperture Radar (ASAR) images acquired on different dates, with separate colours assigned to each acquisition to highlight differences between them.

In this composite, red relates to an acquisition on 2 March 2003, green to one on 14 October 2003 and blue to one on 6 April 2004. The dominance of green is due to monsoon-influenced vegetation growth.

The view was acquired in ASAR Wide Swath Mode, with pixel sampling of 75 metres.