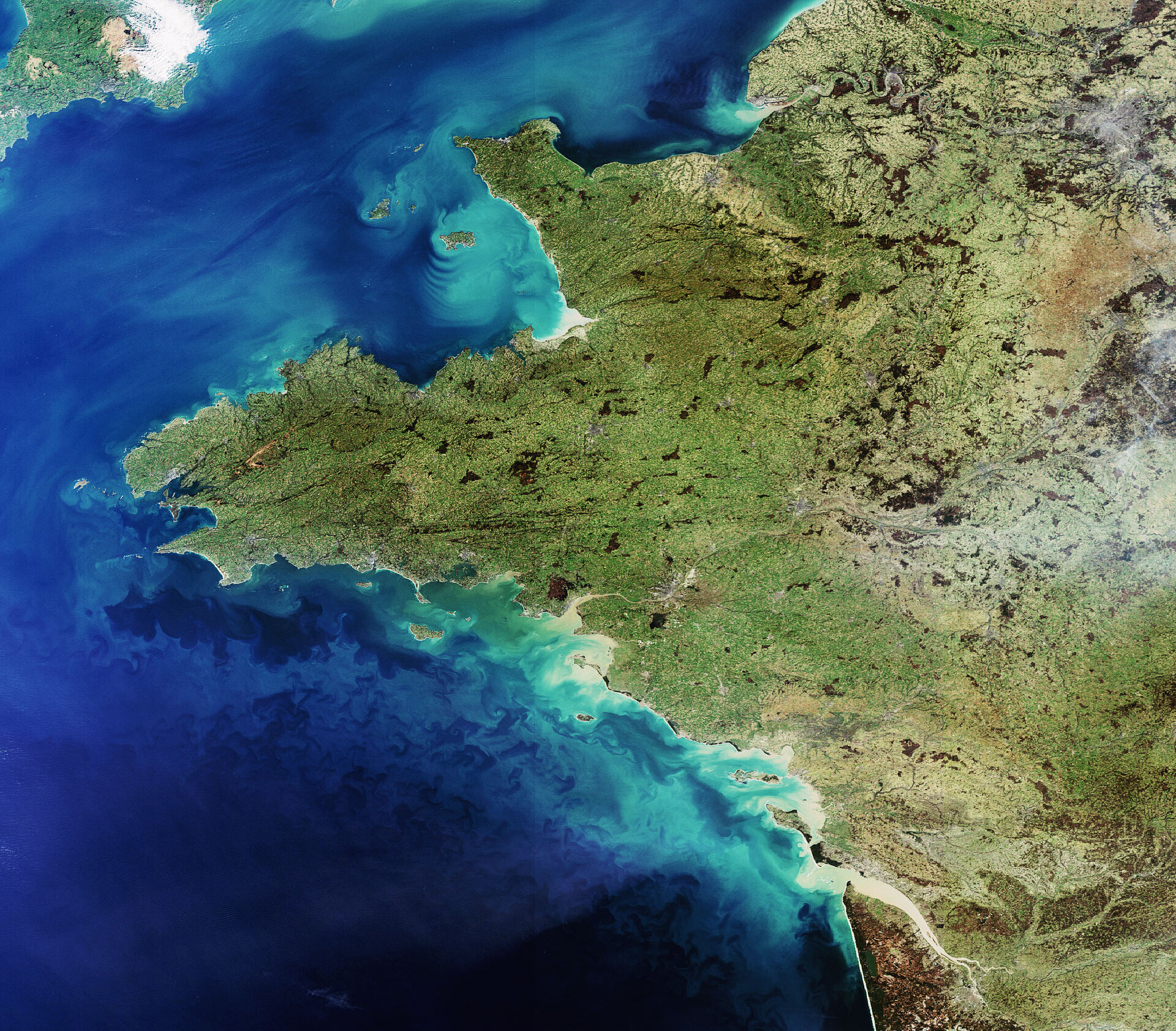 Jutting westward into the Atlantic Ocean is the peninsula of Brittany, which is bordered on the north by the English Channel and on the south by the Bay of Biscay.

Normandy, the site of the largest military landing in history that took place on 6 June 1944, lies to the northeast of Brittany. Mont St. Michel, a small quasi-island separated from the mainland by approximately one kilometre of sandbanks or waves, is situated in Normandy.

Mont St. Michel is home to the Gothic-style Benedictine abbey dedicated to the archangel St. Michael. Since 1979, Mont St. Michel and its bay have been included on UNESCO’s World Heritage Sites list.

The islands in the English Channel off the coast of Normandy (visible to the left of the protruding area above centre image) are the Channel Islands. Although they are dependencies of the British crown, they are not strictly part of the United Kingdom. (England is visible in the upper left corner.)

Western Loire (Pays de la Loire), located to the south of Brittany, is home to the city of Nantes, the former capital of Britanny that was transferred to the Western Loire region in 1962. Nantes is located on the Loire River, the longest river in France with a length of just over 1000 km, inland from the tan-coloured inlet on the southern coastline of the peninsula.

Loire Valley (le Val de Loire), located to the east of Western Loire and to the south of France’s capital city Paris (the gray area visible in the upper right hand corner), is often called the ‘Garden of France’ and is home to more than a 1000 chateaux. The central part of the Loire River valley region was added to UNESCO’s World Heritage Sites list in 2000.

Also included on UNESCO’s World Heritage Sites list is the historic part of the port city of Bordeaux (visible in the bottom right hand corner of image, inland from the tan-coloured Gironde estuary), which is located in the north of the Aquitaine region.

This image was acquired by Envisat’s Medium Resolution Imaging Spectrometer (MERIS) instrument on 11 February 2008 working in Full Resolution mode to provide a spatial resolution of 300 metres.