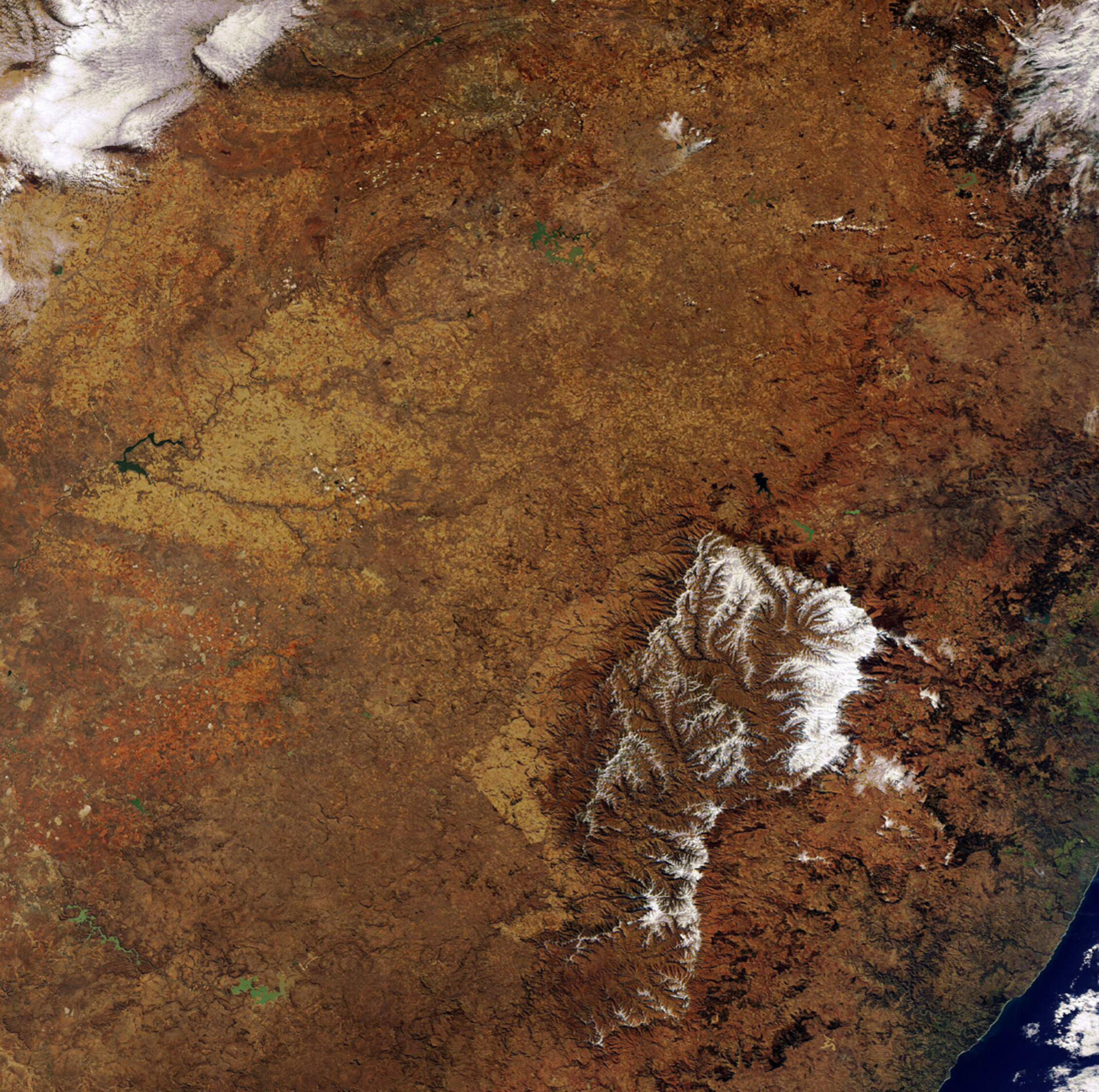 Winter snow blankets the heights of the Drakensberg Mountains in Lesotho in this Envisat image acquired over southern Africa.

Lesotho, surrounded by South Africa, is the only independent country in the world that lies entirely above 1000 m. Due to its altitude, Lesotho experiences cooler temperatures year-round than other areas at the same latitude. Between May and September, snow is common in the lowlands, while the highlands can experience snowfall continuously.

The Drakensberg mountain range is located in southern Africa and extends from northeast to southwest for around 1125 km in Lesotho and southeastern South Africa. At 3482 km, Thabana-Ntlenyana is the highest peak in the range and in Lesotho.

The uKhahlamba–Drakensberg Park, located at Lesotho’s northeastern border with the South African province of Kwazulu-Natal (just north of the northeastern corner of the snow-capped mountains in the image), covers roughly 240 000 hectares.

Rich in its diversity of habitats, the park is home to various populations of endemic birds, mammals and reptiles. It is also home to the largest collection of rock paintings in Africa south of the Sahara. The paintings reflect the way of life of the San people, which lived in the area for more than four millennia. In 2000, UNESCO named the park as a World Heritage Site.

Johannesburg – South Africa’s largest and most populous city – can be seen at the centre top of the image. The emerald green body of water located southeast of Johannesburg is South Africa’s biggest and third largest dam by volume – the Vaal Dam, which has over 800 km of coastline and covers an area in excess of three hundred square kilometres.

The vast plain to the west of Lesotho is the South African province of Free State. Because it produces over 70 percent of the country's grain, it is referred to locally as ‘South Africa’s breadbasket’.

This image was acquired by Envisat’s Medium Resolution Imaging Spectrometer (MERIS) instrument on 3 July 2007 working in Full Resolution mode to provide a spatial resolution of 300 metres.