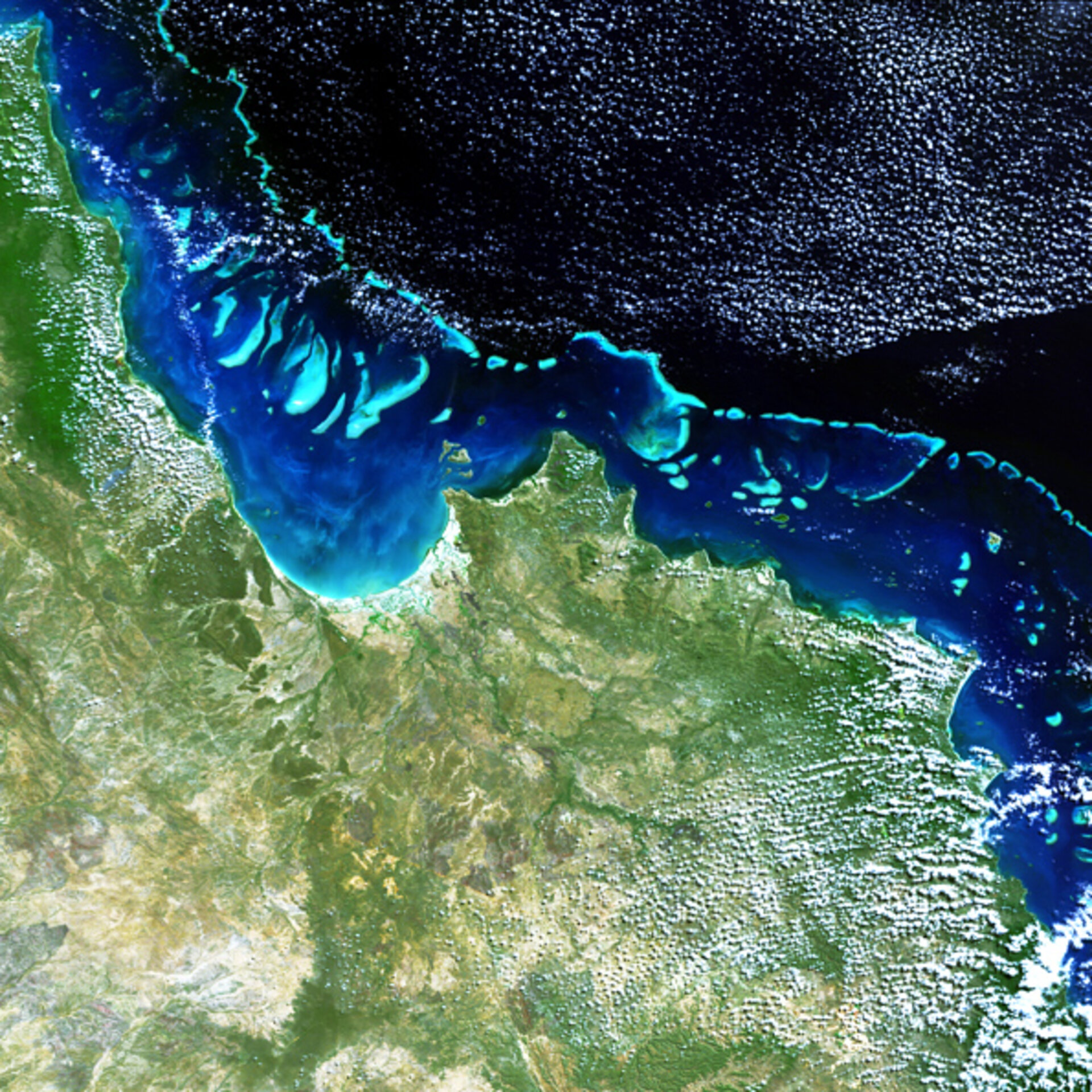 Properly speaking, the Great Barrier Reef is an interlinked system of about 3000 reefs and 900 coral islands, divided by narrow passages. An area of biodiversity equal in importance to tropical rainforests, the Reef was made a UNESCO World Heritage Site in 1981. Around a third of the Reef is protected as part of Australia's Great Barrier Reef Marine Park, the largest marine park in the world.

Home to sharks, turtles, and 1500 tropical fish species, the Great Barrier Reef is a popular destination for scuba divers and many cities across the Queensland coast offer daily boat trips for tourists. The section of Reef seen here is towards its northern extremity, known as the Far Northern Management Area.

The Reef was formed by colonies of coral polyps, which thrive in the warm, shallow waters of the Coral Sea. Each polyp lives inside a shell of aragonite, a type of calcium carbonate, and the polyps join together to form the distinctive, intricate patterns of coral.

The colour in coral comes from associated species of algae that serve as food to the coral polyps. Only live coral has colour, with dead coral appearing white. Live coral grows on the accumulated skeletons of dead coral, so the Reef as a whole is growing between one and two centimetres annually.

There have been reefs off the northeast coast of Australia for around 17 million years, ever since the drifting continent entered tropical waters. The Great Barrier Reef as we know it originated during the last Ice Age between 8000 and 10 000 years ago, when melting ice gradually inundated the edge of the continental shelf, forming an area suitable for coral to colonise.

Queensland has no major rivers and few big towns, so the corals here are less stressed by environmental pollution than comparable reefs elsewhere. However around 400 reefs are in areas where the water quality is classed as having declined due to sediment and chemical runoff from farming, and the loss of coastal wetlands which in the past would have worked like a natural barrier.

Envisat's Medium Resolution Imaging Spectrometer (MERIS) acquired the image from which this crop has been taken on 19 August 2004, working in Full Resolution mode to yield a spatial resolution of 300 metres. The crop covers 326 by 326 kilometres.