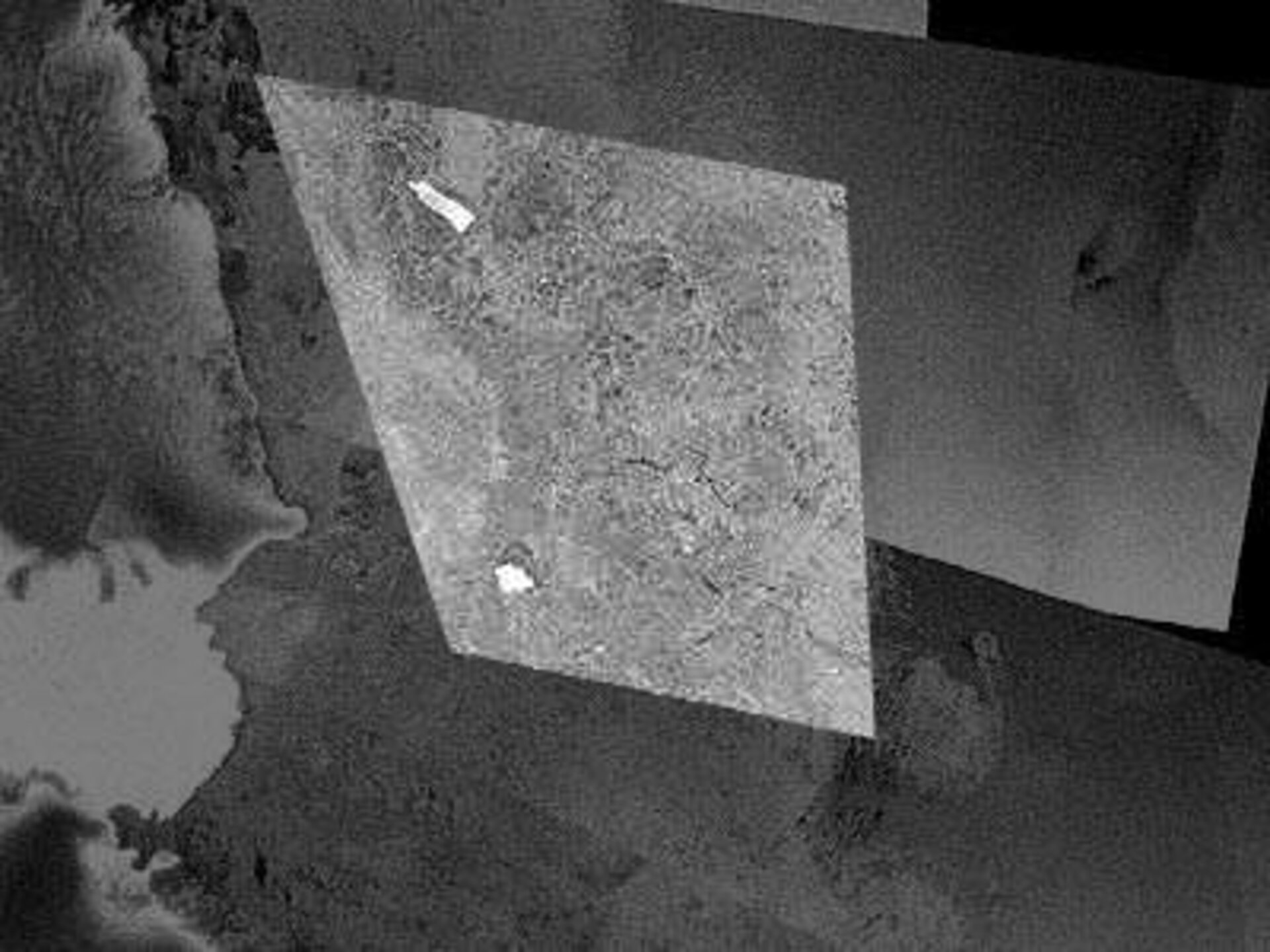 A new Envisat viewing mode means that icebergs can be routinely tracked on their long trek around Antarctica, with regularly updated images of polar regions now available to highlight ice movements.

The Advanced Synthetic Aperture Radar (ASAR) instrument on ESA's Envisat can see through the polar storms and winter darkness that keep Antarctica hidden from optical satellite sensors. ASAR works in a variety of different modes: its latest, operational since February, is called Global Monitoring Mode (GMM). "With this innovative mode, ESA provides for the first time the capability to image the full Earth with SAR data on a regular basis. As a priority, GMM data are acquired over polar areas, and then over the other continents”, explained José Achache, ESA Director of Earth Observation Programmes.

"GMM has an image swath of 400 km and a resolution of 1 km," said Eric Guyader, an ESA Young Graduate Trainee who has used GMM to create Antarctic mosaics. “Advantages of GMM data are good radiometry and small volume (few Mbytes), therefore GMM products are being made available via the Internet in near-real time (about three hours after acquisition) to all ESA-registered researchers working in relevant areas.”

GMM's wider coverage makes putting together such a continental-scale mosaic a comparatively simple task: it takes about 200 GMM images to complete it, and Envisat acquires 14 new Antarctic images a day, so the mosaic can be updated as frequently as required.

Higher-resolution Antarctic satellite mosaics have been produced, but they require a lot more effort to produce – Guyader compares them to "putting together a jigsaw" – because they typically require at least ten times more larger-sized images and cannot be updated so routinely.

"The significance of this new GMM mode is that it provides big-picture views of polar regions which we couldn’t obtain routinely from SAR before," commented Mark Drinkwater of ESA's Ice/Ocean Unit. "By zooming out like this on a frequent basis, it highlights where are the most dynamic sites that show promise for closer examination – we can then zoom in with higher-resolution ASAR modes or perform interferometry to quantify changes in the ice, such as measuring the velocity of flowing ice streams.”

"One kilometre resolution may not sound like a lot, but it is remarkable how much it shows – particularly the icebergs. We can obtain a picture record of the size of icebergs as they first calve off ice shelves and then regularly track them in the GMM data. And if we know where they are we can identify the radar altimetry data acquisitions from Envisat, or our forthcoming CryoSat mission, to potentially measure their elevation above the water.”

"Additionally, by following icebergs with regular GMM images we have the potential to learn more about local currents across a range of depths; the larger a given berg the more likely it is to be influenced by deeper currents, because a significant fraction of its cross section and mass is hidden below the waterline", added Drinkwater.

The product might also be useful in practical terms as an aid to shipping. For example, on the Antarctic coast in the middle of lower half of the mosaic is McMurdo Sound in the Ross Sea, location of United States and New Zealand polar bases. In recent years the difficulty and cost of resupplying these bases has increased due to smaller bergs breaking off from the massive bottle-shaped B-15A iceberg, seen pointing straight down.

Across from B-15A is seen the floating Drygalski Ice Tongue - itself fated to become an iceberg at some point - these two ice features appearing like gates closing across the Sound.

Over on the right of the image, off the Amery Ice Shelf, can be seen a solitary iceberg called B-15D (though through the process of mosaicing, its motion makes it look like multiple icebergs in the April-May 2004 mosaic). Like B-15A, this iceberg was originally part of the massive B-15 iceberg that broke off the Ross Ice Shelf (at the image base) back in April 2000 and subsequently broke up into multiple pieces.

By any terms, B-15D itself is a massive iceberg, 50-km long and 12-km wide. Since the year 2000 prevailing currents have carried it a quarter of the way around Antarctica. In the course of a month the GMM imagery shows it moving 300 km anticlockwise (westwards), giving it an average velocity of 10 km per day.

The sea-ice cover which wraps around the entire Antarctic continent is currently advancing as the southern hemisphere winter bites. Although GMM is not optimised for ice margin detection, the northward sea-ice extent is highlighted by the radar contrast between ice and open water. This backscatter difference between ice and water surfaces can disappear in some locations where the water surface is made choppy by wind from Antarctic storms.

ASAR does not acquire image data directly over the poles, so there is a gap in coverage, but land surface features of interest are also detectable in GMM mode, as seen here in the mosaic. Mountainous volcanoes (nunataks) poking through the ice sheet can be seen on the relatively darker Western Antarctic portion of the continent, connected to the Antarctic Peninsula, highlighted by heightened radar backscatter from their bare rock and also highly deformed ice flowing around their peaks.

West Antarctica shows up darker because it experiences higher precipitation and snow accumulation, and deeper layers of fresh snow return less of a radar signal than the more layered snow found elsewhere.

"By contrast the plateau on the eastern side of Antarctica is a desert," Drinkwater explained. "Wind tends to blow existing snow around rather than large quantities of fresh snowfall. Just to the bottom right of the centre circle can be seen distinctive patterns of undulating topography and 'megadunes' - vast fields of elongated dunes formed by drifting snow. These dunes can range up to about 10 metres in height and 10 kilometres from peak to peak and form under the action of the winds which accelerate downslope from the South Pole."

Over on the other side of the world, GMM images of the Arctic have begun to be used operationally by ICEMON. This is a consortium providing sea ice, oceanographic and meteorological services to high-latitudes users as part of ESA and the European Commission's joint Global Monitoring for Environment and Security (GMES) initiative, intended to give Europe an independent global environmental monitoring capability.

Envisat results to be revealed

Launched in March 2002, ESA's Envisat satellite is the most powerful means ever created of monitoring the state of our world and the impact of human activities upon it. Envisat carries ten sophisticated optical and radar instruments to observe and monitor the Earth’s land, atmosphere, oceans and ice caps, maintaining continuity with the Agency’s ERS missions started in 1991.

After two and a half years in orbit, more than 700 scientists from 50 countries are about to meet at a special Symposium in Salzburg in Austria to review and discuss early results from the satellites, and present their own research activities based on Envisat data.

There are to be over 650 papers, selected by peer review. Presentations will include results from Envisat on the Prestige oil spill, fires in Portugal in 2003, the Elbe flooding in 2002, the evolution of the Antarctic ozone hole since the launch of Envisat, the Bam earthquake and pollution in Europe.

Numerous demonstrations are planned during the week in the ESA Exhibit area. An industrial consortium exhibit on GMES is also planned.