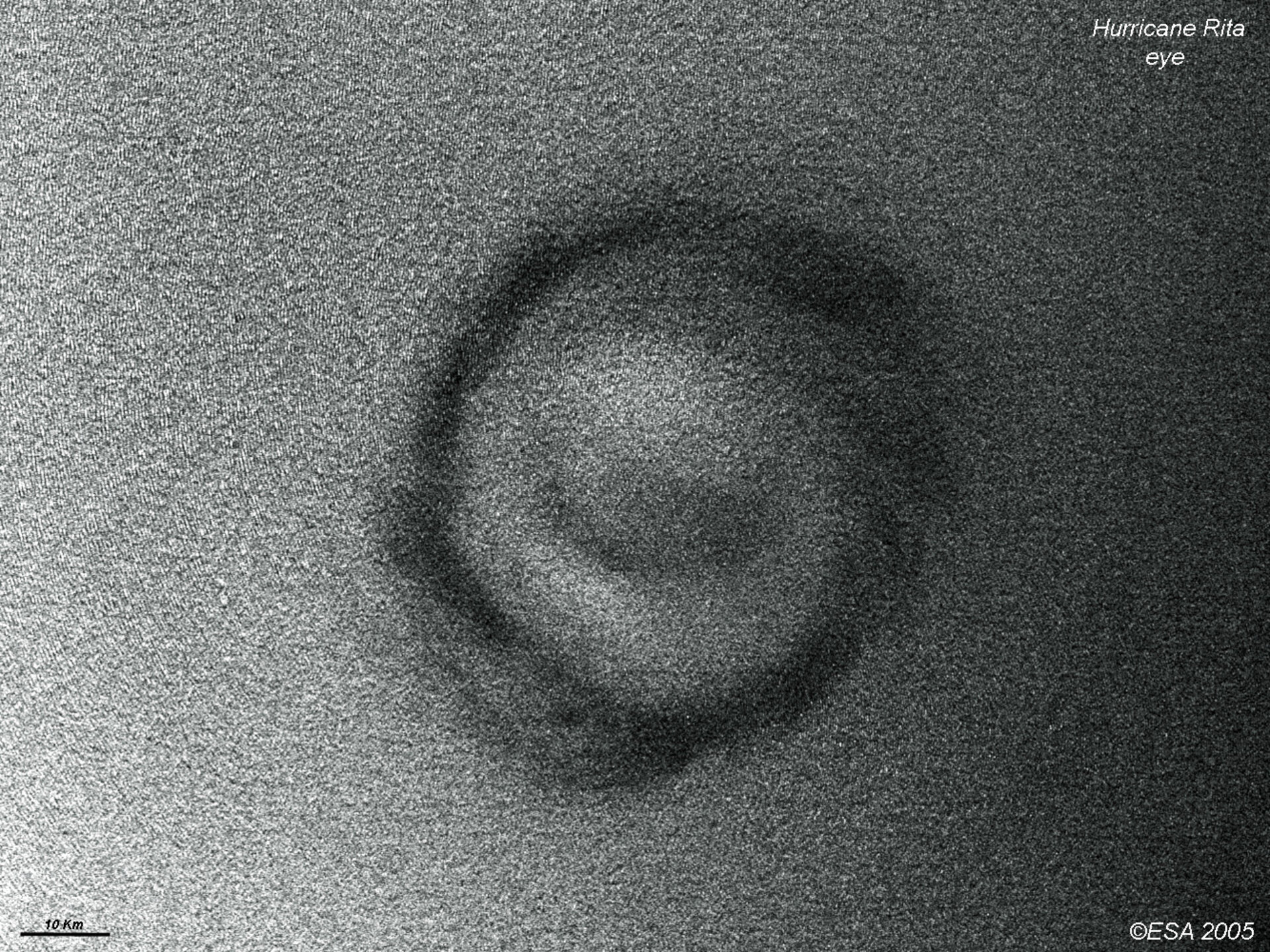 As Hurricane Rita entered the Gulf of Mexico, ESA's Envisat satellite's radar was able to pierce through swirling clouds to directly show how the storm churns the sea surface. This image has then been used to derive Rita's wind field speeds.

Envisat acquired this Advanced Synthetic Aperture Radar (ASAR) image at 0344 UTC on 22 September (2345 on 21 September in US Eastern Daylight Saving Time), when Hurricane Rita was passing west of Florida and Cuba. The image was acquired in Wide Swath Mode with resolution of 150 metres. Envisat's optical Medium Resolution Imaging Spectrometer (MERIS) is also being used to observe the storm during daylight, returning details of its cloud structure and pressure.

Notably large waves are seen around the eye of Hurricane Rita in the radar image. ASAR measures the backscatter, which is a measure of the roughness of the ocean surface. On a basic level, bright areas of the radar image mean higher backscatter due to surface roughness. This roughness is strongly influenced by the local wind field so that the radar backscatter can be used in turn to measure the wind.

So the Center for Southeastern Tropical Advanced Remote Sensing at the University of Miami used this ASAR image to calculate the speed of Hurricane Rita's surface wind fields – showing maximum wind speeds in excess of 200 kilometres per hour.

"It is critical for weather forecasters to obtain reliable characterization of the eye wall dimension and the radii of gale- tropical storm- and hurricane-force winds in order to provide skilful forecasts and warning. Satellite based observations will facilitate better understanding of hurricane evolution and intensification.

"Radar images penetrate through clouds and can easily detect the eye replacement cycle of hurricanes which are precursors to further intensification."

Rita was a maximum Category Five on the Saffir-Simpson Hurricane Scale when the ASAR image was acquired. As it continues west through the Gulf of Mexico it has weakened to a still-dangerous Category Four. Rita is expected to make landfall on the Gulf coast during the morning of 24 September.

This instrument works by firing a trio of high-frequency radar beams down to the ocean, then analysing the pattern of backscatter reflected up again. Wind-driven ripples on the ocean surface modify the radar backscatter, and as the energy in these ripples increases with wind velocity, so backscatter increases as well. Scatterometer results enable measurements of not only wind speed but also direction across the water surface.

What makes ERS-2's scatterometer especially valuable is that its C-band radar frequency is almost unaffected by heavy rain, so it can return useful wind data even from the heart of the fiercest storms – and is the sole scatterometer of this type currently in orbit.

The ERS-2 Scatterometer results for Hurricane Rita seen here have been processed by the Royal Netherlands Meteorological Institute (KNMI). They are also routinely assimilated by the European Centre for Medium-Range Weather Forecasting (ECMWF) into their advanced numerical models used for meteorological predictions.

"Scatterometer data from the ERS-2 platform provide high-quality wind information in the vicinity of tropical cyclones," states Hans Hersbach of ECMWF. "For a Hurricane like Rita, the combination of such observations with [in-situ] dropsonde data enables the analysis system at ECMWF to produce an improved forecast."

Another Envisat instrument called the Radar Altimeter-2 uses radar pulses to measure sea surface height (SSH) down to an accuracy of a few centimetres.

Near-real time radar altimetry is a powerful tool for monitoring a hurricane's progress and predicting its potential impact. This is because anomalies in SSH can be used to identify warmer ocean features such as warm core rings, eddies and currents.

The US National Oceanic and Atmospheric Administration (NOAA) is utilising Envisat RA-2 results along with those from other space-borne altimeters to chart such regions of 'tropical cyclone heat potential' (TCHP) and improve the accuracy of Hurricane Rita forecasting.

A hurricane is basically a large, powerful storm centred around a zone of extreme low pressure. Strong low-level surface winds and bands of intense precipitation combine strong updrafts and outflows of moist air at higher altitudes, with energy released as rainy thunderstorms.

Envisat carries both optical and radar instruments, enabling researchers to observe high-atmosphere cloud structure and pressure in the visible and infrared spectrum, while at the same time using radar backscatter to measure the roughness of the sea surface and so derive the wind fields just above it.

Those winds converging on the low-pressure eye of the storm are what ultimately determine the spiralling cloud patterns that are characteristic of a hurricane.

Additional Envisat instruments can be used to take the temperature of the warm ocean waters that power storms during the annual Atlantic hurricane season, along with sea height anomalies related to warm upper ocean features.