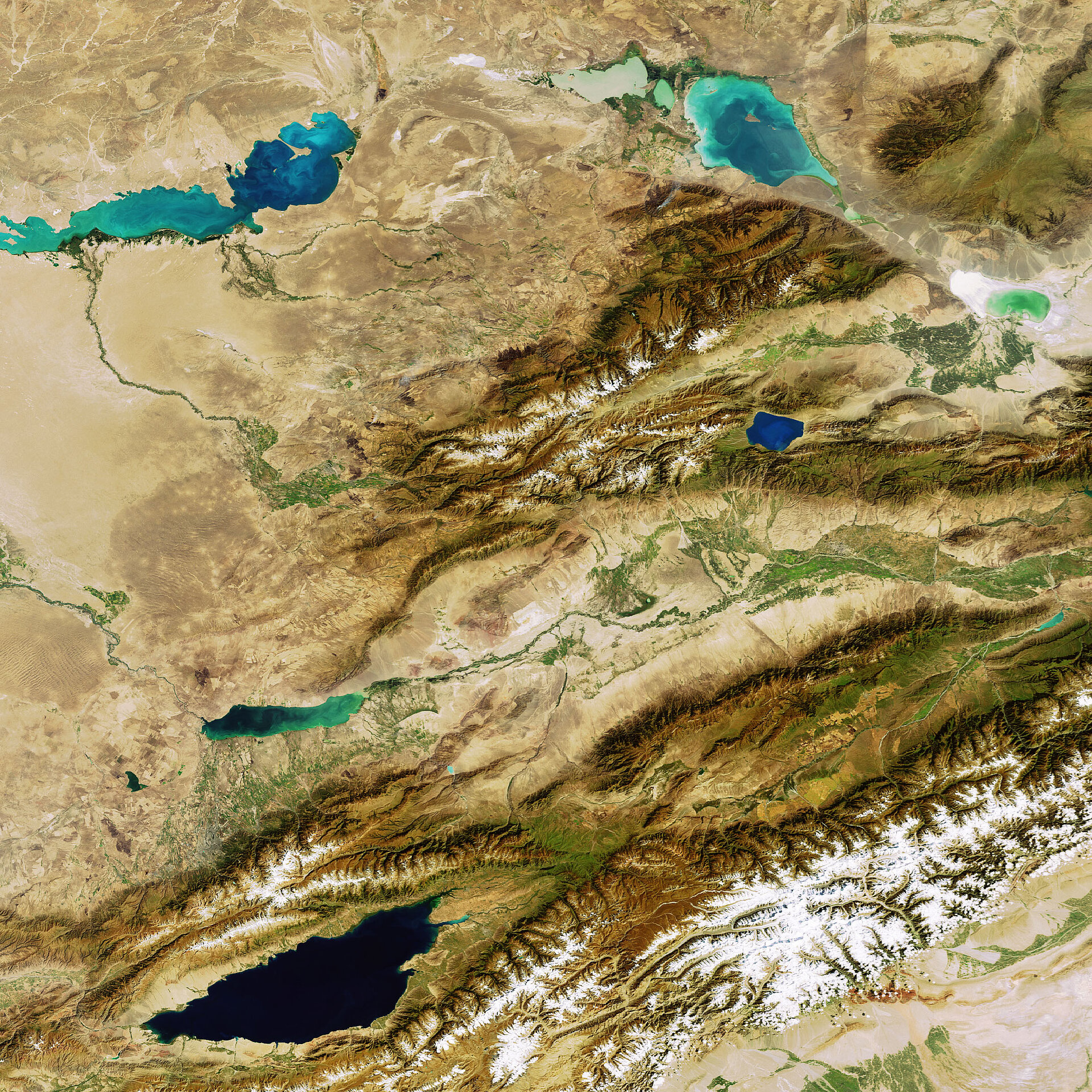 This Envisat image highlights several of the lakes in the southeastern part of the Republic of Kazakhstan and in the northeastern area of Kyrgyzstan.

With a territory of some 2 727 300 sq km, Kazakhstan is the ninth largest country in the world. Situated in the centre of the Eurasian continent, it borders Russia to the east, north and northwest, the Caspian Sea to the west, the People's Republic of China to the southeast and Kyrgyzstan, Turkmenistan and Uzbekistan to the south.

The eastern end of Lake Balkhash, the second largest lake in Central Asia, is visible in the upper left hand corner. Lake Balkhash, which contains freshwater in the west and saltwater in the east, covers an area over 16 000 sq km and has a length of some 600 km. A sandbank at the Saryisek peninsula – the Lake's narrowest part - divides the two halves.

The Ili, Karatal and Aqsu Rivers feed the lake, which is located 966 km east of the Aral Sea. Like the Aral Sea, Lake Balkhash is shrinking due to river waters being diverted that would otherwise go to replenish it. The Ili River was dammed in 1970 to form the Kapchagayskoye Reservoir (second large body of water visible one third of the way up from bottom).

Lakes Sasykkol (the most northerly lake visible), a freshwater lake, and Alakol, a saltwater lake, are located some 180 km east of Lake Balkhash. Lake Alakol (below Sasykkol) has an area of 2655 sq km and reaches a depth of about 45 m. The smaller body of water located between them is the brackish Lake Koshkarkol.

Sayram Lake, located within China's Xinjiang province, is visible south of Lake Alakol. The sapphire-coloured lake is the largest and highest alpine lake in Xinjiang and is surrounded by the Borohoro Shan mountain range.

The dark lake at the bottom left of the image is Lake Issky-Kol. Its dark colour is due to its 668-metre depth. Lake Issky-Kol has an area of 6200 sq km, making it one of the largest mountain lakes in the world. Despite being surrounded by snowy peaks, its slightly saline water does not freeze in winter.

The snow-capped Tien Shan mountain range is visible just beneath Lake Issky-Kol. The mountain range, which stretches some 2400 km, forms part of the boundary between Kyrgyzstan, southeastern Kazakhstan and China.

Also visible in the image is the former Kazakhstan capital of Almaty, located at the foot of the snowy mountains, north of the middle of Lake Issky-Kol. Since 1998 Astana, closer to the centre of Kazakhstan, has served as the capital.

This image was acquired by Envisat's Medium Resolution Imaging Spectrometer (MERIS) instrument on 12 September 2007, working in Full Resolution mode to provide a spatial resolution of 300 metres.