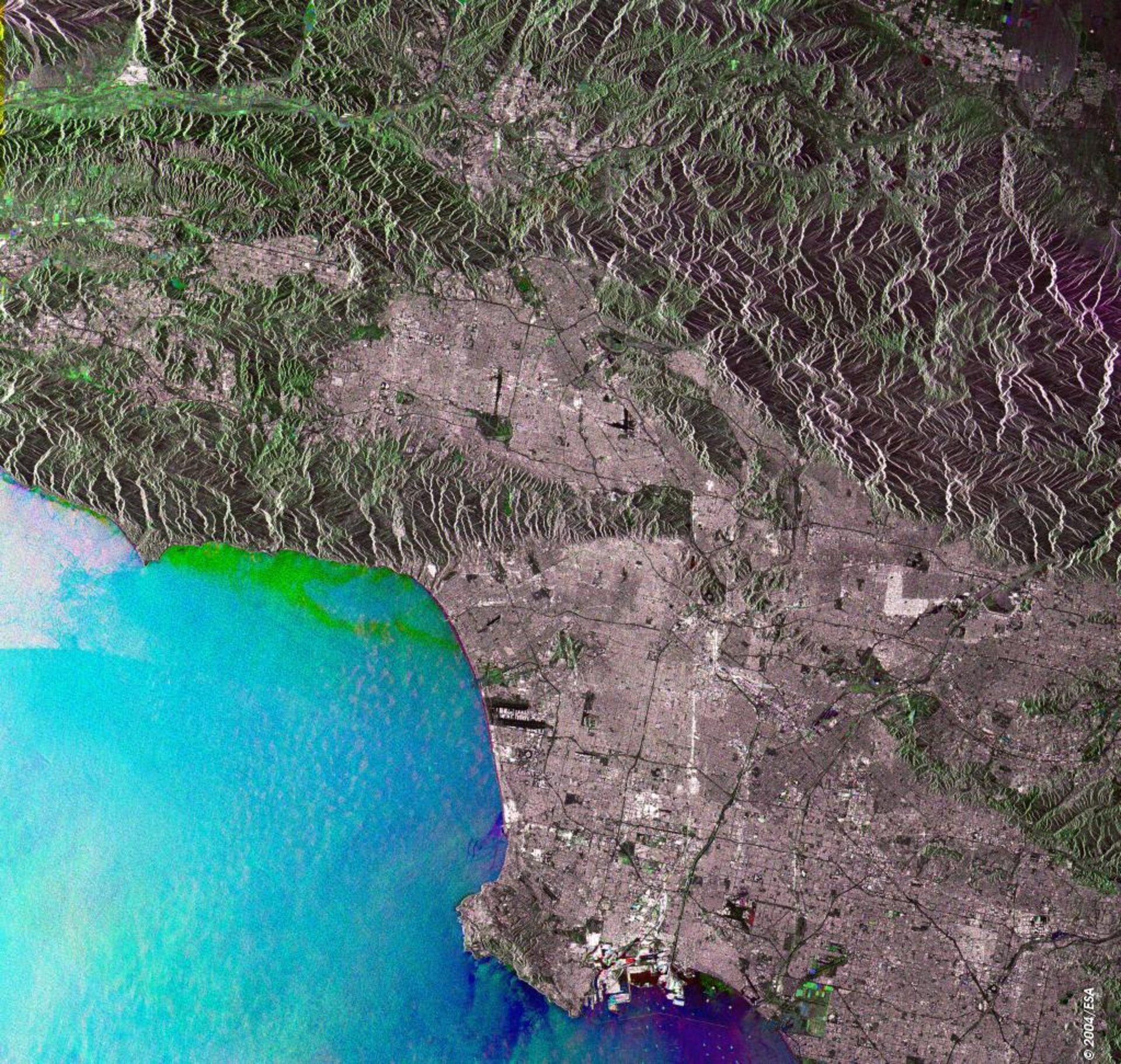 This Envisat multicolour radar composite image shows much of the coastal conurbation of Los Angeles in Southern California, the second most populated city in the United States after New York.

Radar imagery records signal backscatter strength and therefore surface roughness, seen most clearly in the contrast between the smooth sea and textured land. Cities reflect radar extremely well, due to their numerous artificial corners and flat surfaces, and shown very well here is the characteristic grid appearance of Los Angeles along with major roadways.

These include the Santa Monica Freeway running west to Santa Monica Bay, and looking very closely at the end of the road Santa Monica Pier can be seen extending into the ocean.

The Los Angeles River runs north to south through the city, emerging at Long Beach. Its banks have been built up and straightened, with numerous bridges running above it.

Several airports are located inside Los Angeles, most prominent of these is Los Angeles International Airport on the coast south of Marina Del Rey. Smooth runway surfaces produce no signal backscatter so they show up black, seen here like an elongated 'c'.

The image is made up of three Advanced Synthetic Aperture Radar (ASAR) images acquired on different dates, with separate colours assigned to each acquisition to highlight differences between them: red for 14 June 2004, blue for 23 August 2004, green for 1 November 2004.

Because Los Angeles is situated in a semitropical Mediterranean climate zone there are few significant seasonal changes, therefore resulting in a less colourful multitemporal coloured image than is typical.

Most notable here is the winter growth showing in green on the heights of the surrounding San Gabriel Mountains, and also within vegetated areas within the city limits, such as the Naval Weapons Station Seal Beach, located on the coast at the southern end of the image.

The greenish tinge of the water off Malibu, towards the top of the image, may reflect unsettled winter weather. Ships show up as well using radar, as seen by looking closely at nearby Long Beach, seen in different colours depending the date they were acquired.

The view was acquired in ASAR Image Mode Precision, with pixel sampling of 12.5 metres and a width of 105 kilometres.