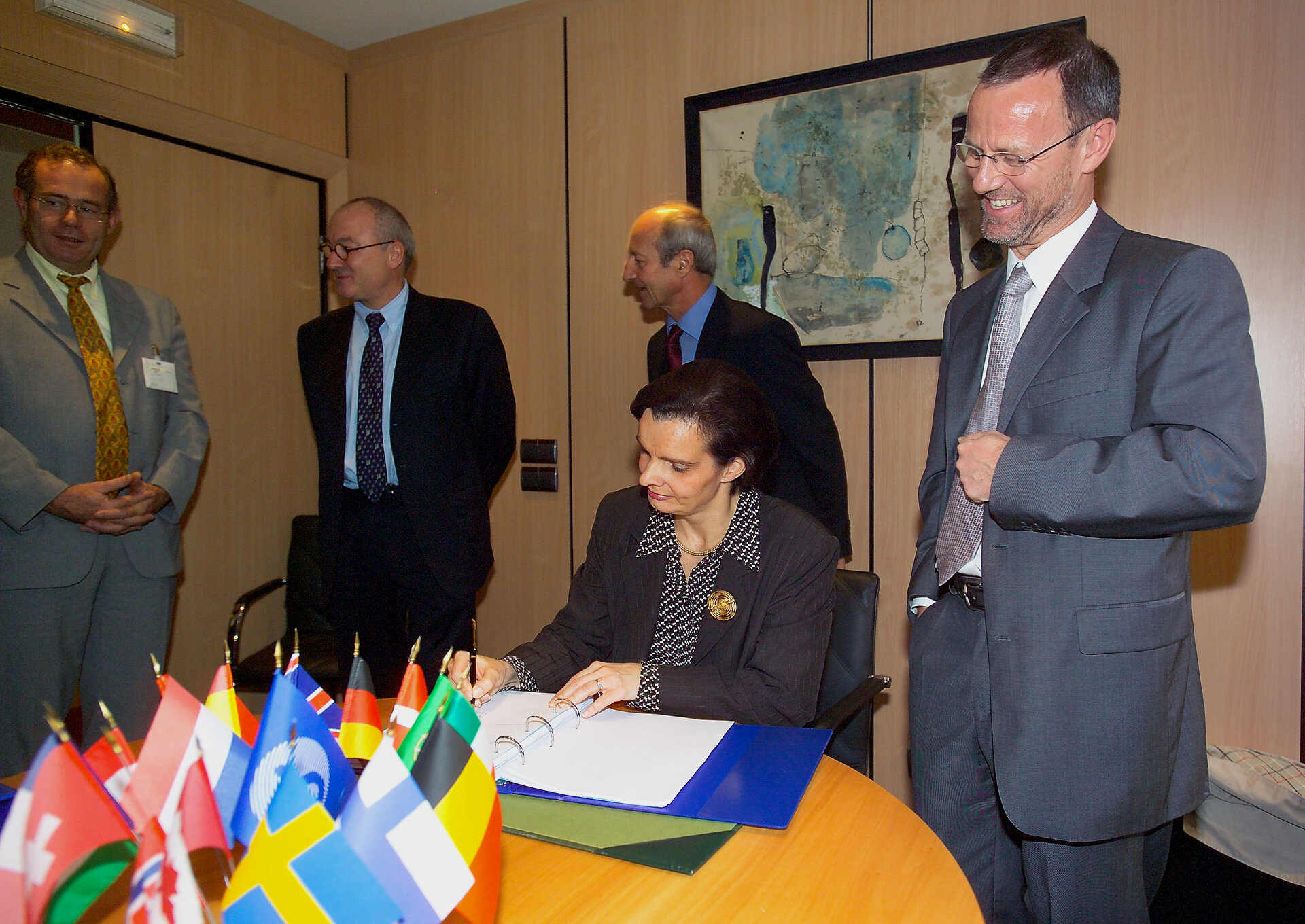 ESA PR 58-2004. The contract for a fourth Meteosat Second Generation (MSG) spacecraft was signed today, ensuring continuity of European meteorological satellite services with the delivery of data for weather forecasting, climate and the environment for many years into the future.

French firm Alcatel Space is prime contractor for MSG-4 while EUMETSAT will finance, launch and operate the satellite. ESA is responsible for managing the satellite construction contract with industry. The price of the MSG-4 satellite contract is €135 million, calculated at December 2001 economic conditions, with delivery expected in 2007.

“This is another excellent example of ESA’s commitment to utilitarian activities, developing space systems to support public services for the benefit of citizens in Europe and other parts of the world,” said ESA Director General Jean-Jacques Dordain.

Since ESA launched Meteosat-1 into geostationary orbit 36 000 km above the Earth in 1977, this system of satellites supplying continuous images and data for weather forecasting, climate and the environment has become an integral part of European life. Millions of us see Meteosat images in our television weather reports every day.

In December 1995, when the seventh Meteosat was launched, operational control of the system was transferred from ESA to EUMETSAT - the European Organisation for the Exploitation of Meterological Satellites, based in Darmstadt, Germany. Product and services from EUMETSAT’s satellites make a significant contribution to weather forecasting and to the monitoring of the global climate.

ESA and EUMETSAT jointly decided not only to continue the Meteosat system but to enhance it with an improved satellite design called Meteosat Second Generation. The new satellite acquires images of the Earth's surface and clouds in sharper resolution across a wider range of wavelengths and at more frequent intervals than the imagers aboard its Meteosat predecessors.

To date three MSG satellites have been constructed. The first, MSG-1, was launched on 28 August 2002 and in January this year started routine operations, as Meteosat-8 to mark its formally becoming part of the Meteosat family. The follow-on satellites in the series are MSG-2, MSG-3 – and now MSG-4.

MSG-2 is scheduled for launch in June 2005, explained Lars Prahm, EUMETSAT’s Director General "It will be placed in a parking orbit until needed to take over its sister satellite's duties, waiting in the wings to ensure seamless continuity of service. Collectively the three MSGs are projected to provide up to 15 years of meteorological coverage, and with today's addition of MSG-4 this figure will be significantly extended."

The close cooperation between ESA and EUMETSAT is due to bear fruit in another area at the end of 2005, when the first of three Metop satellites is to be launched into low-Earth polar orbit.

Replacing a service previously supplied by the US National Oceanic and Atmospheric Administration (NOAA), the Metop series is a joint undertaking between ESA and Eumetsat, and forms the space segment of EUMETSAT's Polar System (EPS).