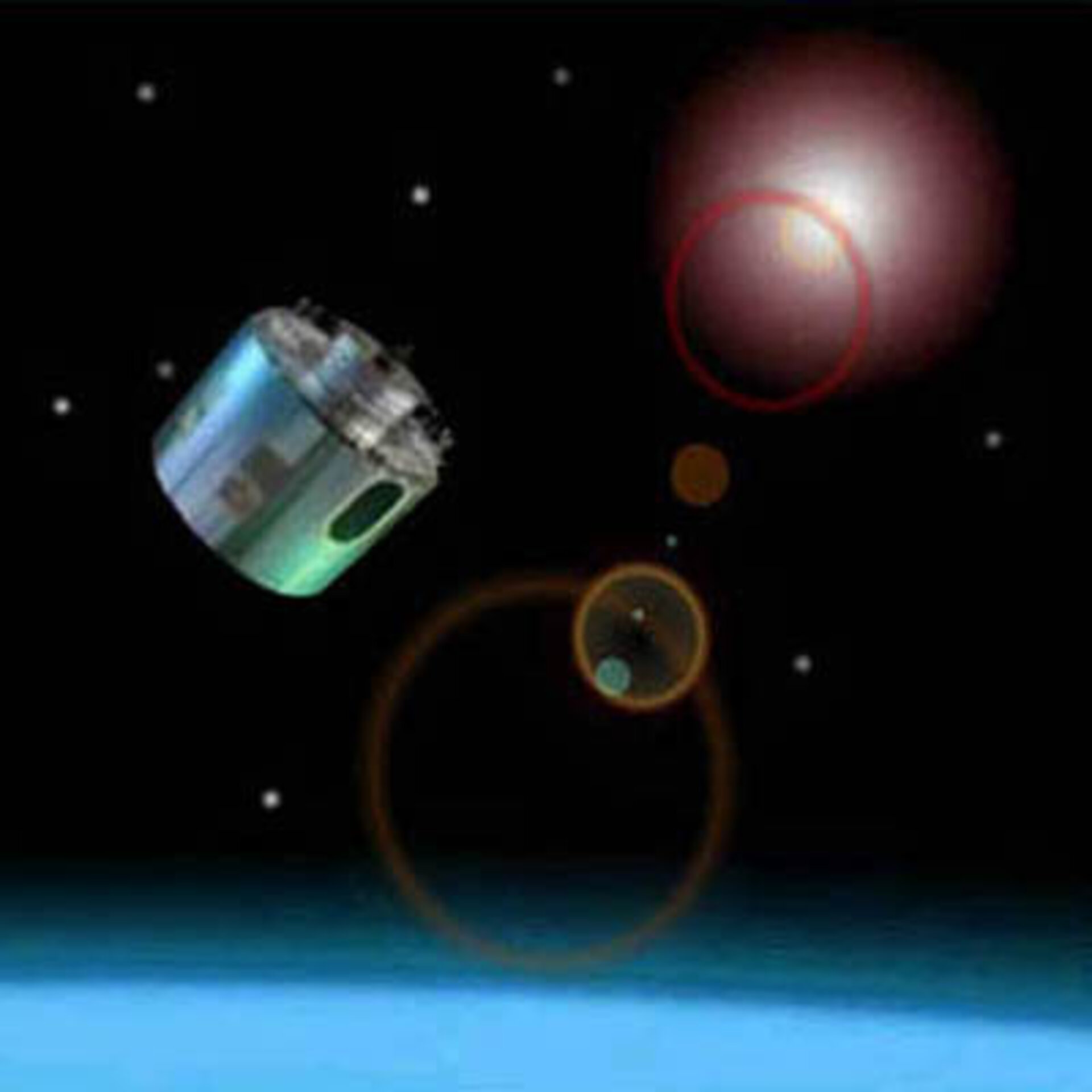 Images of real sequences of clouds moving across Europe have graced our daily TV weather forecasts for the past 25 years. Now, however, the satellites that delivered them are about to be replaced. Out with Meteosat First Generation; in with Meteosat Second Generation (MSG).

When the new satellites take over, sometime after the first launch in August 2002, the images on our screens will be even clearer and sequences of cloud development will be smoother and more realistic. The improved images will allow meteorologists to provide more accurate medium and short-term weather forecasts.

Meteosat Second Generation will take images at more wavelengths and at shorter intervals than its parents, making it particularly suitable for short-term forecasting of sudden troublesome weather phenomena, such as snow, thunderstorms and fog. TV weather bulletins will be able to advise us with considerable accuracy about whether to take an umbrella or avoid a particular stretch of road because bad weather is expected later in the day!

MSG is a joint project between ESA and Eumetsat, the organisation set up in 1986 to establish, maintain and operate a European system of meteorological satellites. Three satellites are planned at present and a ground segment. ESA is responsible for designing and developing the first satellite, and for procuring the other two on behalf of Eumetsat. Eumetsat is responsible for defining the payload based on user needs, procuring the ground segment and launchers, and operating the system.

With the launch of MSG-2, at any one time, two MSG satellites will be functional in geostationary orbit, the operational one being at 0 degrees longitude which is above equatorial west Africa, the other being on stand-by with 10 degrees of separation.

The first satellite, MSG-1 is due for launch on board an Ariane 5 launcher in August 2002. MSG-2 will follow on about 18 months later. MSG-3 will be built and put in storage until it is required to take over as MSG-1 nears the end of its life. Each satellite will have a nominal seven-year lifetime. A fourth MSG satellite of the same design is foreseen to ensure continuity of service until the end of the next decade.

Why we need MSG

Should you take your umbrella when leaving for the office in the morning? Will there be dangerous fog on the motorways later in the day? Could there be a hailstorm that will damage your garden plants? When the MSG satellites are installed in orbit, meteorologists should be able to answer these sorts of questions accurately, whatever your location across Europe.

By using the very latest, state of the art technology, the new satellites will monitor weather development and processes closely enough to allow accurate predictions of adverse weather over the next few hours anywhere over the satellite’s footprint. Airports will get earlier warning of impending fog, local authorities will know when to grit the roads before a cold snap, construction companies will be able to plan ahead for wet weather and farmers plan harvests. The commercial implications, as well as the convenience, of accurate short-term weather forecasting, or 'nowcasting', are far reaching.

Now more than ever, we also need to understand the processes driving the weather and climate on our planet. Short-lived extreme weather phenomena, such as hurricane and floods, seem to be becoming more frequent and severe. We suspect that manmade processes are at least partly responsible, but we’re not sure how. We also suspect that these same processes are driving long-term climate change, but the evidence is still inconclusive. Our need for the tools to predict severe weather at short notice and to monitor long-term atmospheric change has never been greater.

The MSG satellites will be some of those tools. They will offer weather forecasters and climate modellers more sophisticated images and data than their predecessors, the first generation of Meteosats. The MSG camera, called the Spinning Enhanced Visible and Infra-red Imager (SEVIRI), will build up images of the Earth's surface and cloud cover in 12 different wavelengths once every 15 minutes, compared with three wavelengths once every 30 minutes for the camera on Meteosat. The images will also be sharper: SEVIRI will pick out structures as small as 1 km in the visible compared with 2.5 km for Meteosat. In the infrared, SEVIRI will resolve features 3 km across compared with 5 km for Meteosat.

By doubling the rate of image taking, MSG will keep closer track of cloud development and so be more sensitive than its predecessor to rapid changes in weather patterns. Four of the 12 imaging channels will look at sunlight reflected from the Earth's surface and clouds, compared with only one channel on the Meteosat camera. The remaining eight channels will detect thermal infrared wavelengths compared with just two on Meteosat. Four of these will measure the temperature of clouds, land and sea surfaces and the other four will detect wavelengths emitted by water vapour, carbon dioxide and ozone in the atmosphere. Climate modellers will be able to keep track of the constituents of air masses and so construct a 3D view of the atmosphere.

SEVIRI will be the main instrument on board MSG. However, it will be accompanied by another instrument with a scientific research purpose. The Geostationary Earth Radiation Budget (GERB) experiment will contribute to climate change studies by measuring the amount of radiation arriving on Earth from the Sun and the amount leaving as heat, and scattered and reflected solar radiation. Two further items of the payload will also provide services: a communications package, and a transponder for search and rescue. The communications package will be particularly sophisticated because of the need to receive and transmit data between the ground station and the users.

How the MSG system works

Like Meteosat before it, MSG will monitor a large portion of the Earth and its atmosphere from its position in geostationary orbit at 0 degrees longitude, 35 800 km above the Gulf of Guinea off the west coast of equatorial Africa. MSG-1 will move into position 10 degrees west of the last Meteosat (number seven) for up to six months before swapping places to take over as the operational satellite in the 0-degree position in 2003.

MSG will transmit raw atmospheric data to the Eumetsat control and processing centre in Darmstadt, via the primary ground station, for processing. The raw data will consist mainly of images generated by the camera (Spinning Enhanced Visible and Infrared Imager) and the Geostationary Earth Radiation Budget Experiment on board the satellite. Once processed, the data will be sent back to the satellite for broadcasting to users. Furthermore, data collection platforms on ships, balloons, aircraft and ground–based platforms will also send meteorological data such as local temperature, wind speed and humidity directly to users via the satellite.

The primary ground station will send the processed data to users via the satellite at a high and a low rate. High Rate Information Transmission (HRIT) will contain the full volume of processed, compressed image data and Low Rate Information Transmission (LRIT) will contain a reduced set at lower resolution. In addition, the Eumetsat Control and Processing Centre, with support from other satellite applications facilities throughout Europe, will extract information from the processed data and turn it into 'products' of particular use to meteorologists and climatologists, such as wind field diagrams, maps of upper tropospheric humidity and analyses of cloud shape and height.

To receive data or 'products', users must register with Eumetsat and equip themselves with an appropriate receiving station. The design of the communications package on board MSG is sophisticated enough to cope with the enormous volume of data and the multiple paths it needs to transfer information between ground facilities, satellite and users.

MSG also includes a transponder to relay SOS messages at 406 MHz to a central reception station in Europe, from which they will be sent to the appropriate rescue organisations. This system is run by the COSPAS-Sarsat organisation, which achieves global coverage by having several search and rescue transponders on geostationary and other satellites.

Meteosat Second Generation is a joint project between the European Space Agency and Eumetsat, the European Organisation for the Exploitation of Meteorological Satellites, based in Darmstadt, Germany.

ESA has placed a contract with Alcatel Space Industries, France to build the first three satellites. More than 50 sub-contractors from 13 European countries are involved. Besides, the Geostationary Earth Radiation Budget (GERB) experiment is provided by a consortium lead by the Rutherford Appleton Laboratory.

MSG development and procurement at ESA is managed by the MSG project team at the European Space Research and Technology Centre, Noordwijk, the Netherlands.