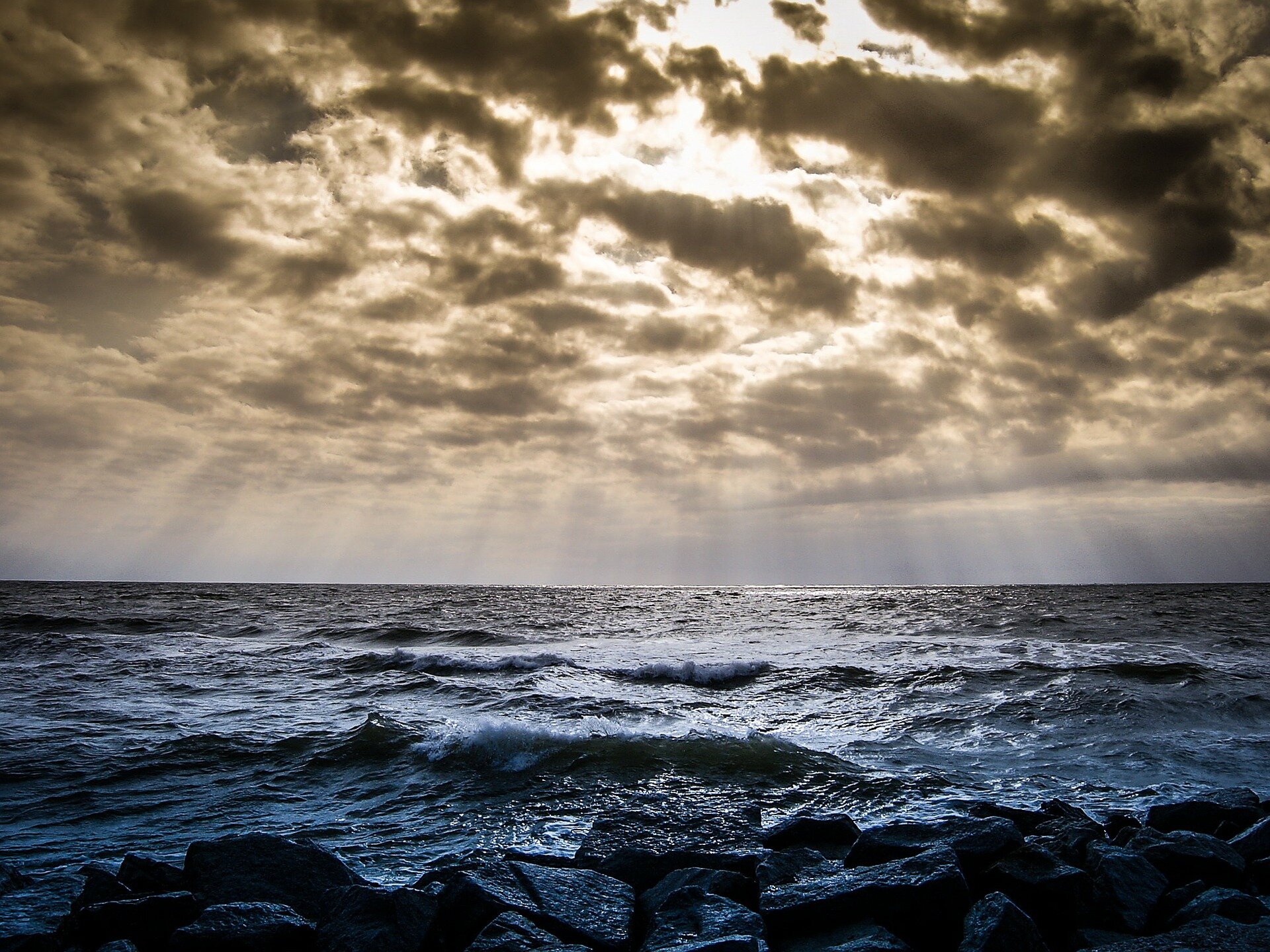 Earth’s oceans help to slow global warming by absorbing carbon from our atmosphere – but fully observing this crucial process in the upper ocean and lower atmosphere is difficult, as measurements are taken not where it occurs, the sea surface, but several metres below. New research uses data from ESA, NASA and NOAA satellites to rectify this, and finds that far more carbon is absorbed by the oceans than previously thought.

Much of the carbon dioxide emitted by human activity does not stay in the atmosphere but is taken up by oceans and land vegetation – so-called ‘carbon sinks’.

There are ongoing efforts to collect and compile in situ measurements of the ocean sink in the form of the Surface Ocean CO₂ Atlas, or SOCAT, which contains over 28 million international observations of our oceans and coastal seas from 1957 to 2020. By delving into SOCAT’s vast database, scientists can identify how much carbon is being sucked out of the atmosphere and stored by our seas. 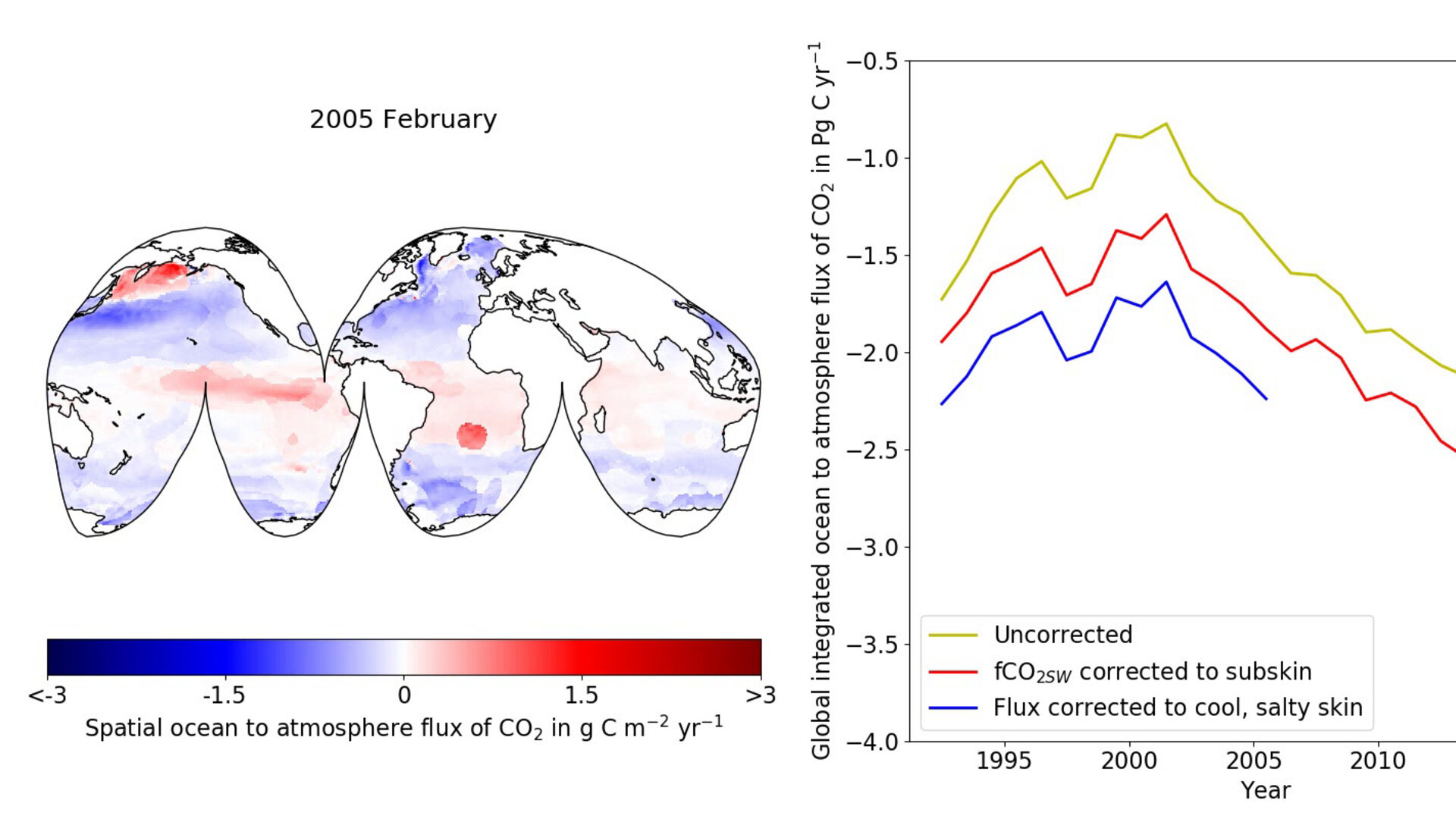 Characterising how carbon flows between ocean and atmosphere
Access the video

“However, there’s a catch: the measurements are not made right at the ocean surface where they are needed, but from a few metres down,” explains Andrew Watson of the University of Exeter, UK, lead author of the new study. Although the difference may be mere metres, the sea surface temperature changes with depth – and so, too, does its associated ability to absorb carbon from the atmosphere.

“Previous studies have ignored the small temperature differences between the surface of the ocean and the sampling depth, but we know that this has a significant impact on how carbon is held by the oceans in terms of salinity, solubility, stability, and so on,” adds Andrew. “But satellites can measure the temperature more or less exactly at the ocean surface – and when we do this, we find it makes a big difference.”

By applying satellite corrections to SOCAT data from 1992 to 2018 to account for temperature differences between the surface and at a few metres’ depth, the researchers find a substantially higher ocean uptake of carbon dioxide than previously thought. They were able to do this thanks to data from a suite of satellites such as ESA’s Envisat, NOAA’s AVHRR, EUMETSAT’s MetOp series, and the Copernicus Sentinel-3 mission, firstly as part of the OceanFlux research project (part of ESA’s Science for Society programme) and then continued within two EU-funded projects.

The corrected figures reveal that the net flux of carbon into the oceans is underestimated by up to 0.9 Gigatonnes of carbon per year – a significant amount that, at times, doubles uncorrected values. 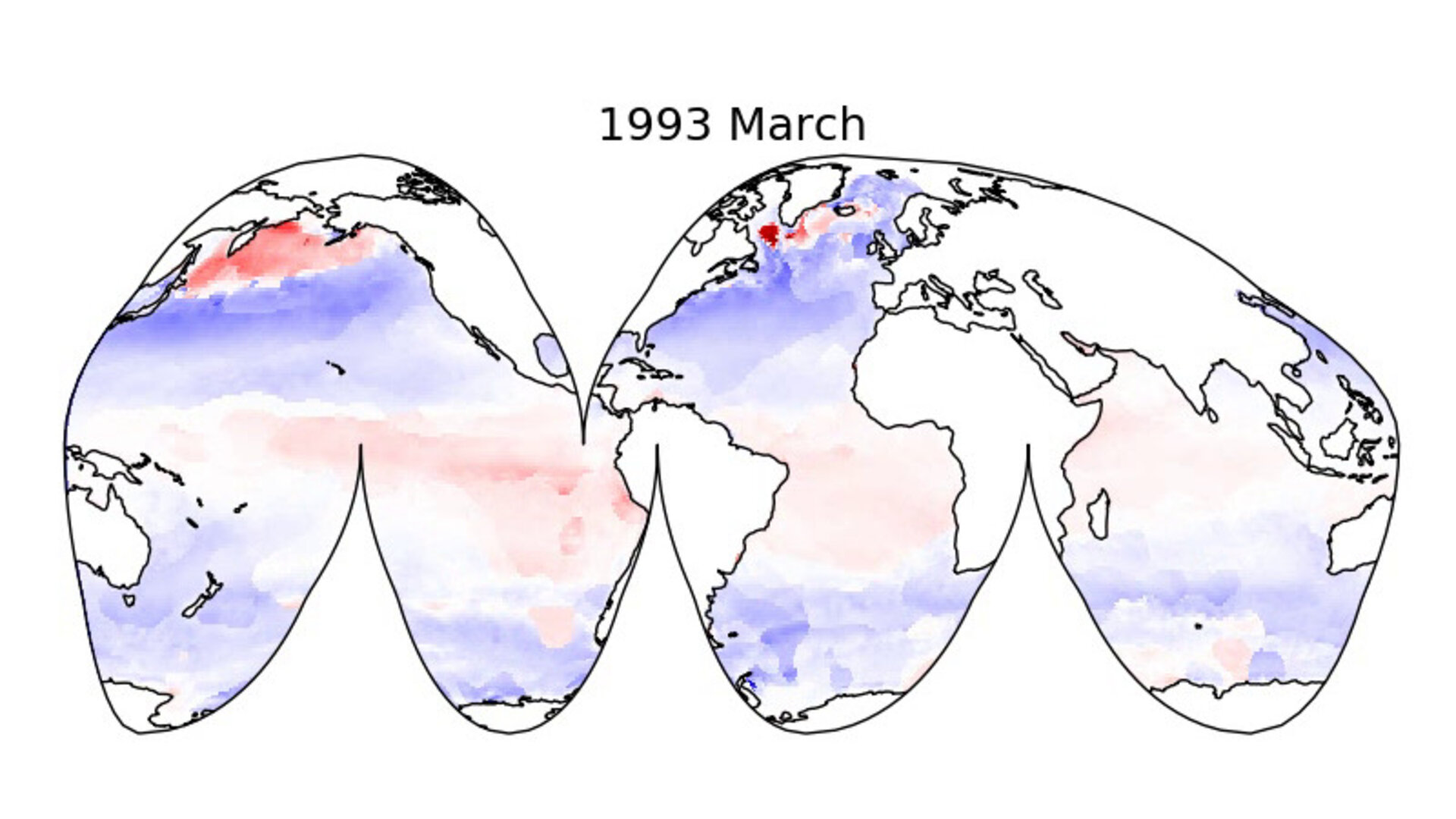 Depicting carbon flux between the ocean and atmosphere
Access the video

“These results are consistent with independent estimates of the size of the oceanic carbon sink – those based on global ocean surveys by research ships,” adds co-author Jamie Shutler, also of the University of Exeter. “Now that these two separate estimates of the size of the carbon dioxide ocean sink agree pretty well, we can view and use their results with greater confidence, and trust that they are most likely giving us an accurate picture of what is going on.”

Andrew and Jamie were both part of a Europe-wide research team – including researchers from Heriot-Watt University and UHI, Scotland – that previously used SOCAT data to estimate how carbon flows into and out of our oceans with unprecedented accuracy. They found that, in 2010 alone, three Gigatonnes of carbon were drawn into the ocean: about a third of the emissions caused by human activity. This finding contrasted with previous estimates of a quarter, leading Andrew, Jamie and colleagues to conclude – as in this study – that the oceans’ role in capturing atmospheric carbon is being underestimated.

While this may bring positive benefits in terms of reducing atmospheric warming due to climate change, as more carbon dioxide is being removed from the air, the oceans are impacted by the carbon they absorb. They become more acidic, which threatens the health of marine ecosystems and makes it increasingly difficult for ocean life to survive.

“The importance of our oceans in both regulating climate and supporting biodiversity cannot be overstated,” adds ESA’s Craig Donlon. “Across all of ESA’s Earth observation activities, our aim is to fully account for the role of our oceans in terms of the carbon cycle. This key result, together with others built on the dedication and excellent collaboration of the ESA OceanFlux team, gives us a solid basis for that, and will help us to more accurately characterise and better understand our planet’s changing climate.”

The paper, published in Nature Communications, is entitled: "Revised estimates of ocean-atmosphere CO2 flux are consistent with ocean carbon inventory."