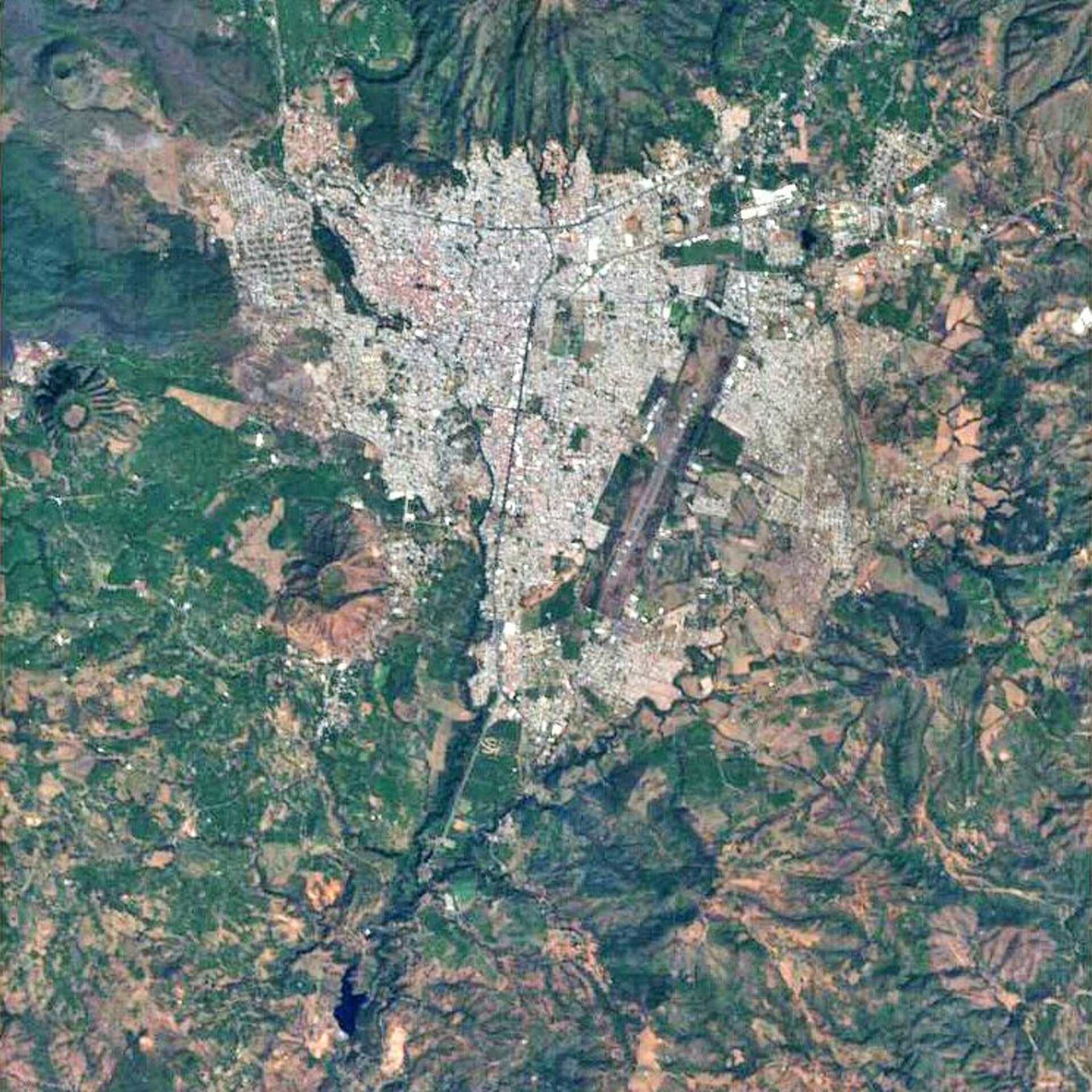 The municipality of Uruapan and its surrounding volcanoes in western central Mexico are featured in this Proba image. Uruapan is located in Michoacán State – one of Mexico’s 31 constituent states.

As apparent in the image, volcanism is a common feature of the Mexican landscape. Of the three visible volcanoes, the one in the middle – Paricutin – is attributed with expanding the scientific community’s overall knowledge of volcanism because it provided scientists with an extremely rare opportunity: the ability to witness the birth, life and death of a volcano.

In 1943 a Mexican farmer, Dionisio Pulido, witnessed the extraordinary emergence of the volcano in a cornfield some 35 km away from Uruapan in the town of Angahuan. Dionisio reported seeing a fissure with a depth of only half a metre before the ground began to swell and raised to around 2.5 metres high. According to Dionisio, smoke, accompanied by a whistling sound, began rising immediately and the air began to smell of sulphur.

By the end of its first year, in which the explosive pyroclastic phase occurred, Paricutin had grown 336 metres tall. Continuous quieter eruptions occurred throughout the following eight years up until the last six months of the volcano’s activity when the eruptions became fierce and frequent.

In 1952 Paricutin’s eruptions ended, marking the death of the volcano because as it is as a monogenetic volcano, it will not erupt again. By this time, the volcano had reached 424 metres. Although the volcanic eruption claimed no lives, it destroyed and buried the village of San Juan Parangaricutiro. The steeple of San Juan’s church can still be seen protruding from the lava field.

To the south of Paricutin is Tancitaro Peak. At 3 860 metres tall, the volcano is Michoacan's highest point and Mexico’s second highest. Tancitaro, located 28 km west of downtown Uruapan, is one of the few, large stratovolcanoes in the Michoacán-Guanajuato Volcanic Field. Some of the most beautiful mountains in the world, such as Japan’s Mount Fuji, are stratovolcanoes. Although picturesque, they are considered the most deadly of the different types of volcanoes.

Uruapan’s international airport landing strip is seen in the image as well as the foothills of the Cerro la Cruz peak (upper right hand corner).

ESA’s Proba satellite, which celebrated its five-year anniversary in space on 22 October 2006, acquired this image on 15 February 2006 with its Compact High Resolution Imaging Spectrometer (CHRIS), designed to acquire hyperspectral images with a spatial resolution of 17 metres across an area of 13 kilometres.