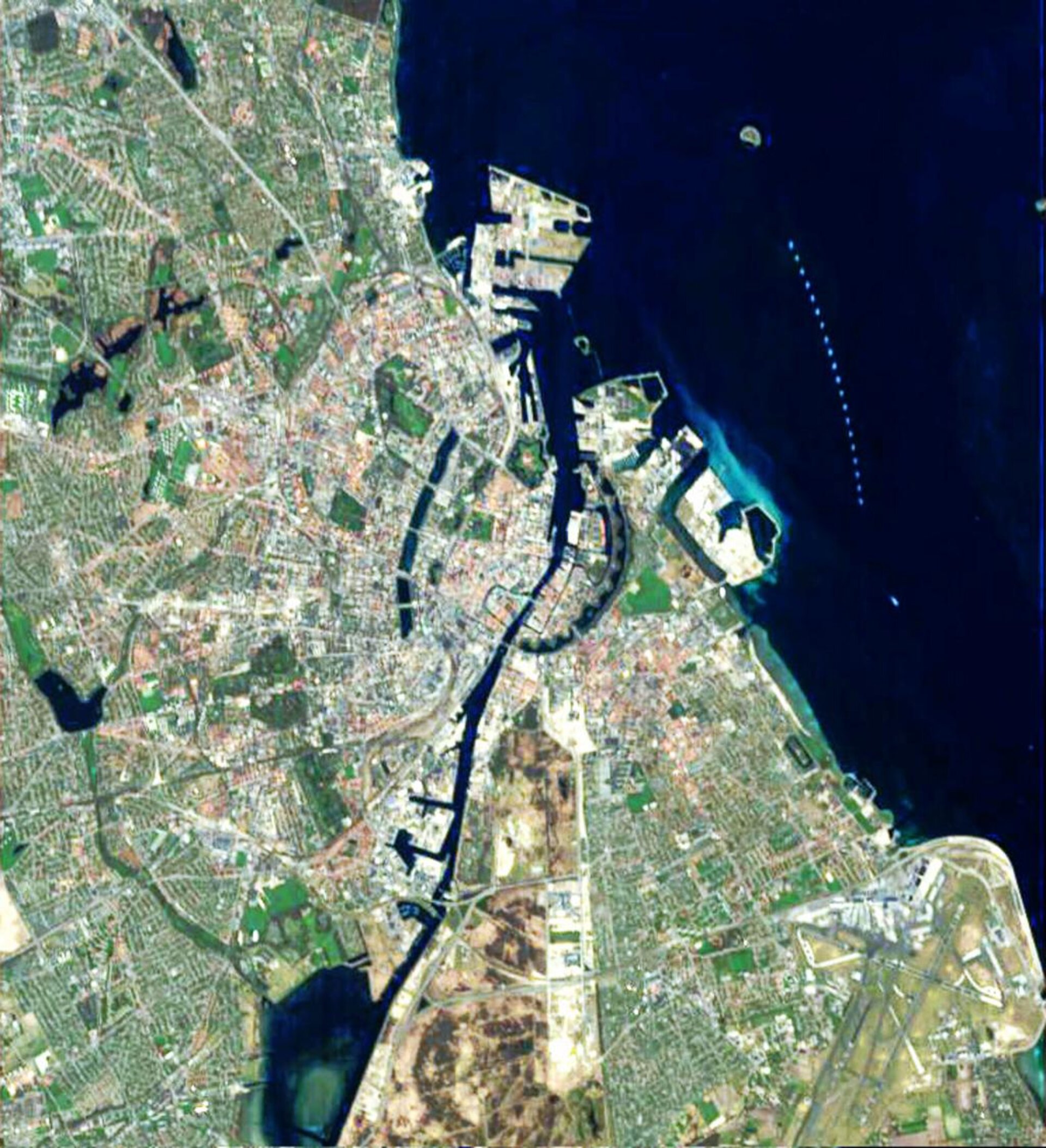 This Proba image shows the historic port of Copenhagen, the capital of Denmark. Appearing off the coast like a string of pearls is a 21st Century addition to the city: one of the largest offshore wind farms in the world.

Copenhagen was first founded as a fishing village around a thousand years ago, subsequently growing in economic significance as a consequence of its natural harbour facing the Øreund, the busy strait that divides Denmark from Sweden and links the Baltic to the North Sea.

Today Copenhagen has 1 116 979 inhabitants, making it the largest city in Denmark. It is located on the eastern side of the island of Zealand and the island of Amager, which was significantly enlarged during the 1940s when its western section was reclaimed from the sea.

Adjacent to the modern port facilities on the eastern edge of Zealand can be seen a green patch, and within it the star-shaped fortification known as Kastellet, which means the Citadel. A relic of Copenhagen’s violent past, this fortress is more than 340 years old. Between its easternmost bastion and the sea is found the statue of the Little Mermaid, famous symbol of the city.

Trace the coast of Zealand westward to find an area of land enclosed by an inverted-U. This is the small island of Slotsholmen, which is the location of Christiansborg Palace, home to Denmark’s Folketing or Parliament and also the Danish Royal Library.

Since 2000, this historic city has also been home to one of the largest offshore wind farms yet built, the Middelgrunden Offshore Wind Farm. It is situated on a natural reef about 3.5 km east of Copenhagen harbour, which was used in the past as a dumpsite for harbour sledge and contaminated waste. Just above it can be seen the fortified island of Middelgrunds Fort.

Anchored in concrete foundations, the windfarm’s 20 turbines are positioned in an arc measuring 3.4 km in length. Each is equipped with a rotor 76 m in diameter standing 64 m above the waves. Middelgrunden is half owned by Energi E2, the local electricity utility and half by the 8 553 members of a local cooperative.

The farm produces 89 000 megawatts of power annually, enough to supply upwards of 3% of Copenhagen’s electricity needs. Denmark has been supporting wind power through tax incentives and subsidies since the 1970s. By 2040 Denmark plans to meet 40% of its electricity needs using wind energy, up from a figure of 13% in 2001.

This image was acquired on 14 April 2004 by the Compact High Resolution Imaging Spectrometer (CHRIS). Built by UK-based Sira Technology, CHRIS is the main payload on ESA's Proba microsatellite, designed to acquire hyperspectral images with a spatial resolution of 18 metres across an area of 14 kilometres.