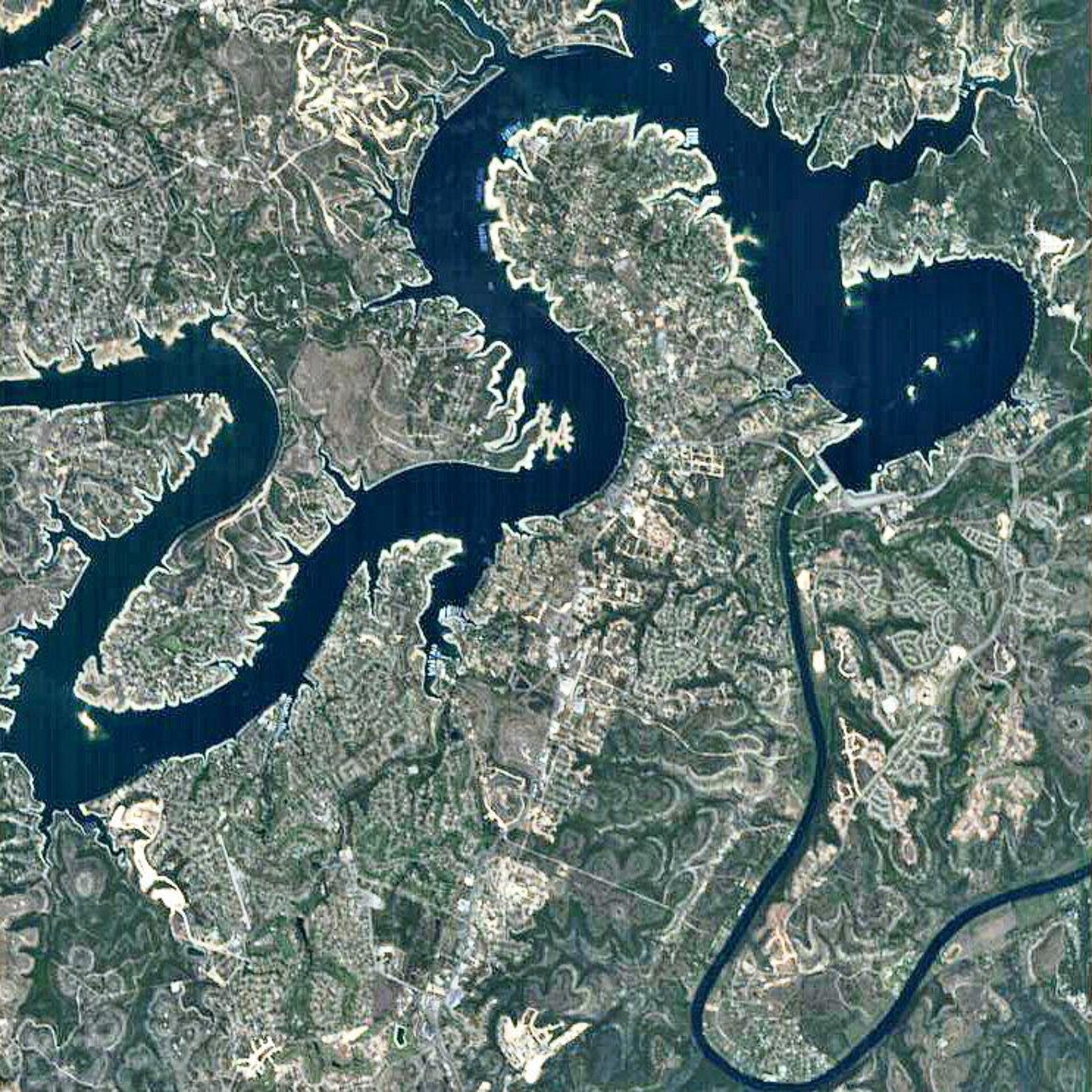 Lake Travis, the larger body of water with a serpentine-like course seen in the upper part of this Proba image, is an artificial lake on the Texas Colorado River that winds its way northwest from the City of Austin through Central Texas for some 100 kilometres.

The lower Texas Colorado River basin has a history of devastating floods that inundated downstream communities, often killing people and wreaking havoc on the economy. To help handle the floods, six dams were built in the lower basin between 1930 and 1950.

Lake Travis was formed by the construction of one of these – the Mansfield Dam (seen where the lake and the Colorado River meet). Since their completion in 1941, the dam and lake have reduced the force of major floods by holding water that would have otherwise inundated downstream residents.

Lake Travis and the five other lakes created by the dams, all constructed and operated by the Lower Colorado River Authority (LCRA), form the Texas Highland Lakes. The other dams and lakes are: Buchanan Dam-Lake Buchanan; Inks Dam-Inks Lake; Wirtz Dam-Lake LBJ; Starcke Dam-Lake Marble Falls; and Tom Miller Dam-Lake Austin. Lake Travis is the fifth lake down in the chain.

Each of the Highland Lakes backs up to the one upstream. During floods, each pair of dams — Buchanan and Inks, Wirtz and Starcke and Mansfield and Tom Miller — operates in tandem. Although all of the dams and lakes were built to help handle the floods, Mansfield Dam, 85 m high and 2.16 km long, and Lake Travis were the only structures designed to contain flood waters.

The other dams pass flood waters downstream to Lake Travis, where the water is stored until LCRA can safely release it downstream. Mansfield is able to store 1.4 km³ of water, and Lake Travis, which is 7.2 km wide, can store 0.98 km³.

ESA’s Proba satellite acquired this image on 7 April 2006 with its Compact High Resolution Imaging Spectrometer (CHRIS), designed to acquire hyperspectral images with a spatial resolution of 18 metres across an area of 14 kilometres.