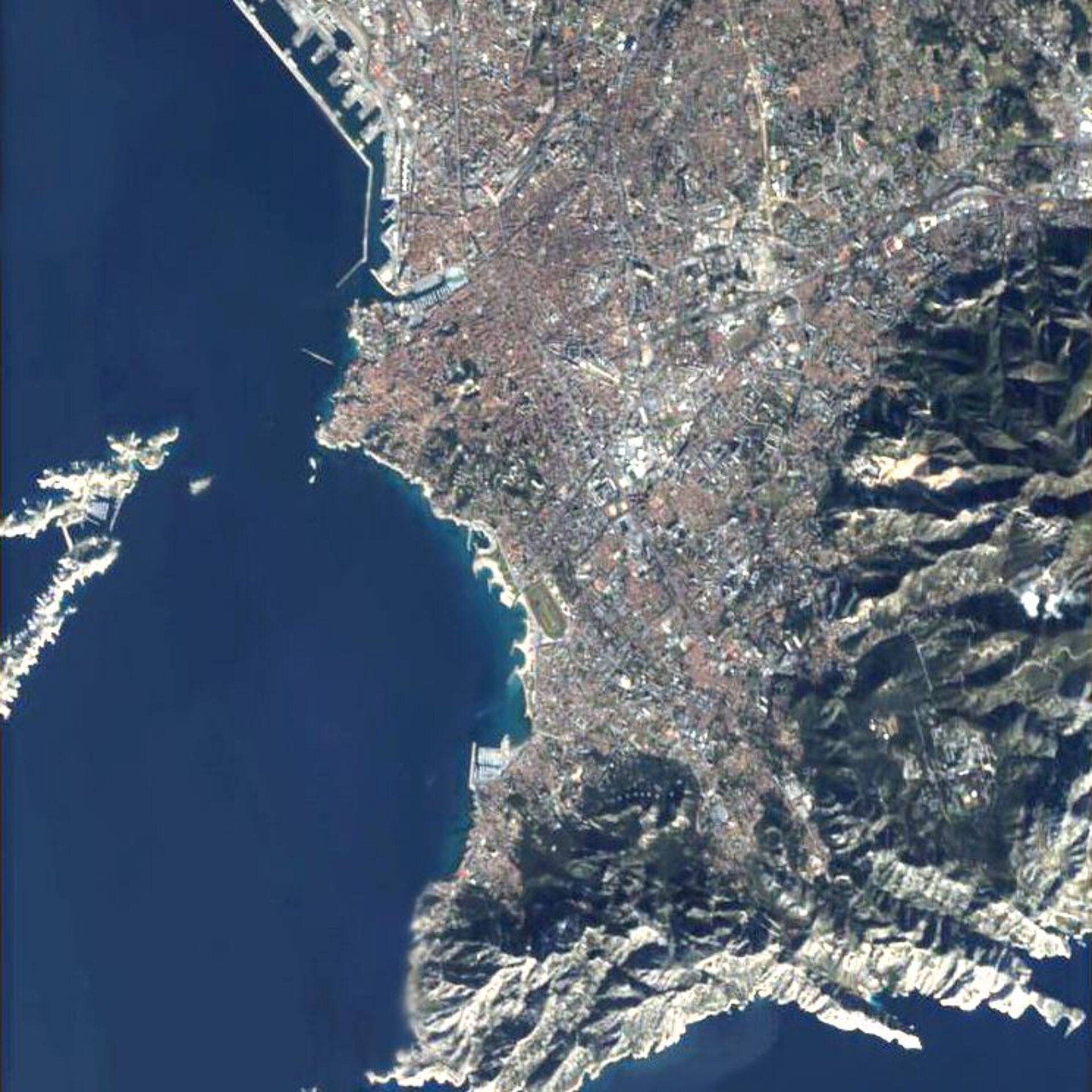 This Proba image features France’s oldest city, Marseille. Greek sailors from Asia Minor founded Marseille in 600 BC. When the Romans annexed it in 49 BC, trading posts were set up all along the Mediterranean Sea. The city later developed into a successful commercial port between the 15th and 19th centuries.

Marseille has a rich history as its location on the Mediterranean made it vulnerable to invasions and diseases arriving by sea. From the 5th to 8th centuries, the city faced barbarian raids and epidemics. While in 1720, the Great Plague hit Marseille and wiped out half its population.

The Vieux Port (Old Port), the U-shaped inlet seen a quarter of the way down on the left side of the mainland, is often referred to as the ‘heart’ of Marseille. Although no longer commercially active, the area is a popular location for restaurants and cafés with views of the sea as well as the yachts and ferries docked in the port. It is believed to be the site where the Greek sailors first landed. La Canebière, an avenue from the 17th century that stretches from the end of the Vieux Port through the city centre to the Square de Stalingrad, is also visible in the image.

In the 19th century, the cathedral of Notre-Dame (the tall whitish-coloured peak seen below the Vieux Port) was built on the highest point of the city. A nine-metre statue of the Virgin Mary tops the church. Bonne Mère (good mother), as it is called, is said to have watched over and protected anglers and sailors out at sea over the years.

Another popular attraction shown in the image is the Chateau d’If (the small island located beside the two larger islands, Le Frioul, on the left side of the image). Alexandre Dumas made the Chateau d’If internationally famous when he used it as the setting of the novel ‘The Count of Monte Cristo’ in 1844. Built from 1524 to 1531 as a defence against raids from sea, the Chateau later became a prison where political and religious detainees were held. At the end of the 19th century, the use of the Chateau as a prison stopped, and it was opened to the public.

ESA’s Proba satellite acquired this image on 20 January 2006 with its Compact High Resolution Imaging Spectrometer (CHRIS), designed to acquire hyperspectral images with a spatial resolution of 18 metres across an area of 14 kilometres.