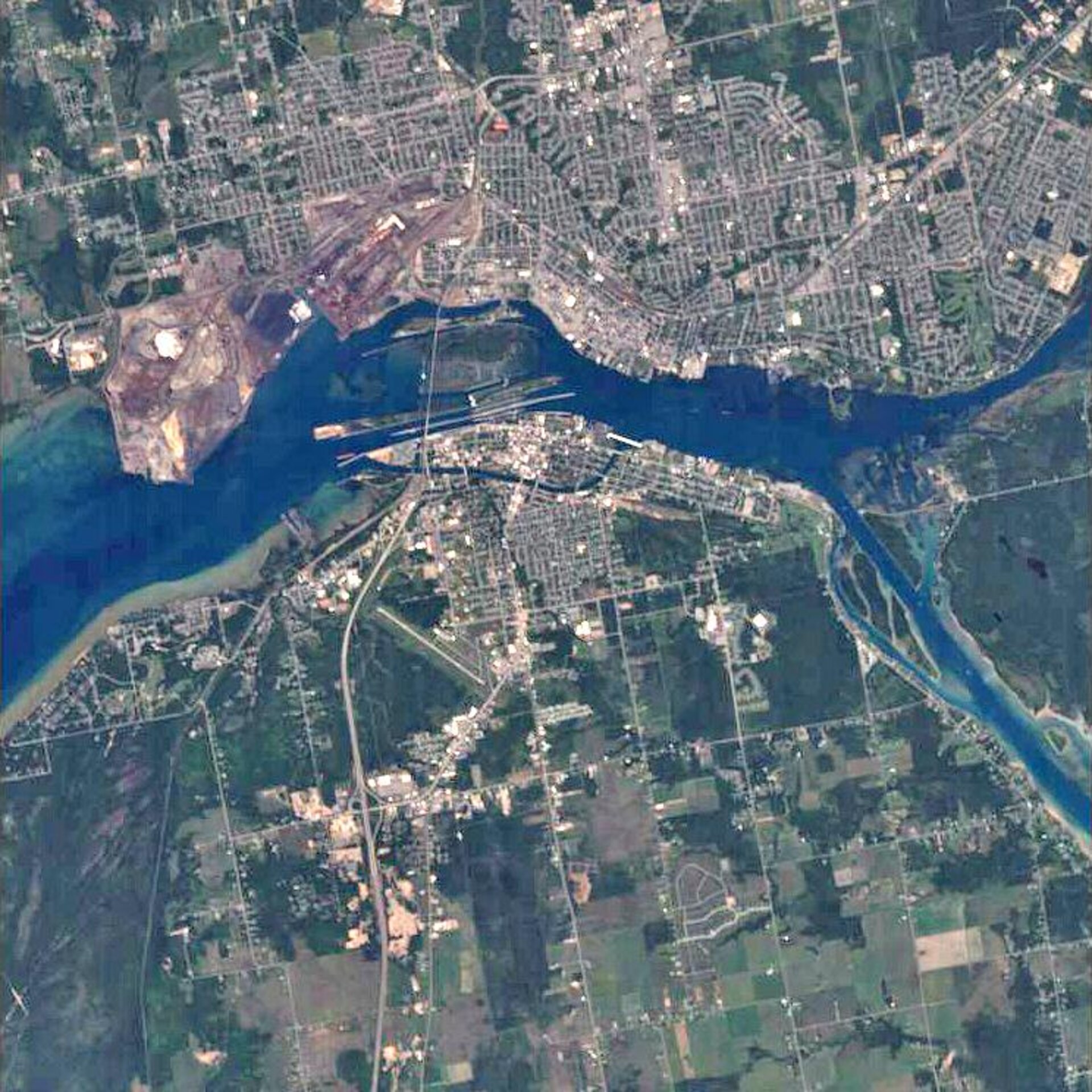 Some 2 000 years ago Native Americans called the area ‘Bahweting,’ meaning ‘The Gathering Place,’ because they congregated there for fishing. It was not until the 1600s that Europeans began venturing into the area. In 1623, traders called the area ‘Sault de Gaston’ in honour of Gaston, Duke of Orleans, who was also the brother of France’s King Louis XIII. In 1668, Jesuit missionaries renamed it ‘Sault Sainte Marie’ in honour of the Virgin Mary.

The Sault Sainte Marie International Bridge (visible as a thin white strip) spans 4,5 km and connects the sister cities. The bridge, which connects Ontario, Canada, and Michigan, U.S., is well travelled. In 2001, for instance, 2,5 million vehicles crossed it.

St. Mary’s River drains Lake Superior (not visible but located to the west, or left, of the image) and flows 120 km into Lake Huron (not visible but located to the southeast). Lake Superior is the largest of the Great Lakes and has the largest surface area (127 700 km²) of any freshwater lake in the world. Because the level of Lake Superior is higher than the level of the lower lakes, a section of St. Mary’s River drops around 7 m, making it impossible to navigate without canals.

Canada and the U.S. both operate one canal as part of the St. Mary’s Falls Canal project. The canals include four locks – structures used for raising or lowering boats between bodies of water at different levels. On average around 12 000 ships per year pass through the locks, despite them being closed from January to March. The ‘Soo Locks’, as they are often called, are located between the horizontal strips of land located in the south of St. Mary’s River just above Michigan.

ESA’s Proba satellite acquired this image on 11 August 2006 with its Compact High Resolution Imaging Spectrometer (CHRIS), designed to acquire hyperspectral images with a spatial resolution of 18 metres across an area of 14 kilometres.