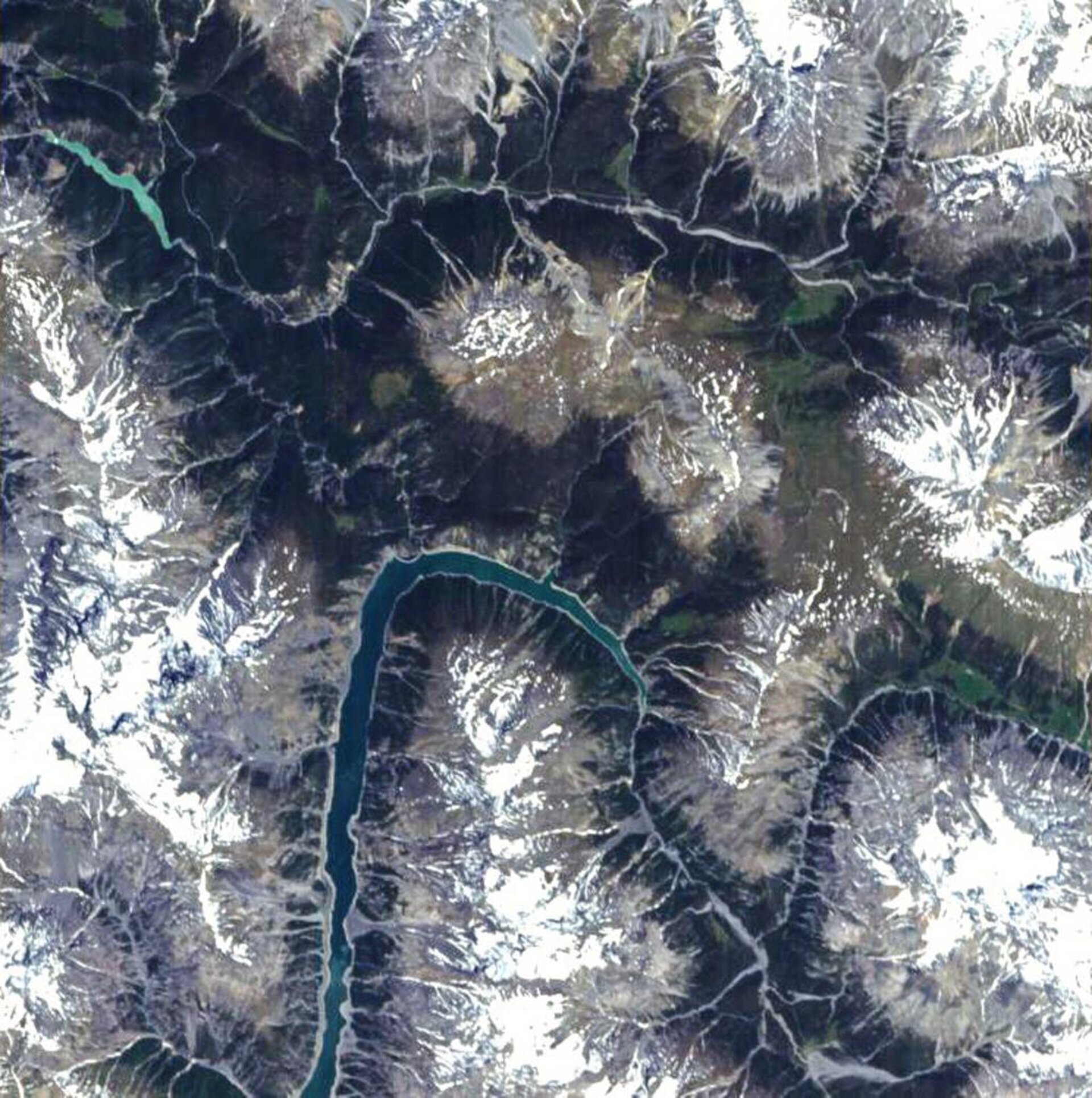 This Proba image shows the southern section of Swiss National Park and part of Switzerland's border with Italy.

Founded in 1914, Swiss National Park is the sole national park in Switzerland and one of the oldest national parks in Europe, covering an Alpine landscape that stretches from an altitude of 1400 to 2300 metres above sea level.

The Park covers an area of 172.3 sq. km, divided roughly equally between Alpine forest, meadows and bare rock. Forested areas appear dark green with mountain tops capped in snow and ice even in the summer. The Ofenpass valley runs west-east through the image centre. To the south can be seen the elongated, artificial Lake Gallo (Lago di Gallo), also known as Lake Livigno, on the Spol (Spöl) River, straddling the Swiss-Italian border.

This image was acquired as part of a scientific project led by Dr. Mathias Kneubühler at the Remote Sensing Laboratories of the University of Zurich to investigate how the optical properties of the Park's deciduous (evergreen) forest cover alter through the seasons.

The team is utilising an instrument called the Compact High Resolution Imaging Spectrometer (CHRIS) aboard ESA's Proba. Built by UK-based Sira Technology, CHRIS is a hyperspectral sensor that acquires images across a wide variety of spectral bands enabling retrieval of a large amount of additional environmental information about a target scene, such as plant chlorophyll content, biomass and leaf area index.

In addition to this hyperspectral capability, Proba additionally performs a roll as it passes a target, to acquire images at five different angles, which enables the measurement of the behaviour of the reflectance at different angles – known as Bidirectional Reflectance Distribution Function (BRDF).

At its simplest, BRDF is the way that objects appear to change when looked at from varied directions. It is an especially sensitive measure of the structure and heterogeneity of vegetation, which is important in turn because of links to the productivity of a given ecosystem.

In particular major physiological processes responsible for energy and mass exchanges - such as evapotranspiration and photosynthesis - are driven by vegetation structure. Improved understanding of these processes can sharpen the accuracy of carbon cycle and climate models and may also contribute to the design of future Earth Observation sensors.

The BRDF shape of a vegetation/forest canopy is very sensitive to changes in brightness of the background, here induced by snow-covered soil, whose reflectance is brighter than the vegetation canopy. The increased spectral contrast between the snow and tree canopy compared to other times of year changes the shape of the BRDF. The BRDF over a snow-covered background is accordingly more sensitive to canopy structure than an observation in summer when the green forest floor is visible.

The University of Zurich team already has a dataset for the 2004 summer/winter season but is currently working on an additional dataset for the 2005 season. Its total database of CHRIS acquisitions over the Swiss National Park comprises 13 scenes starting from November 2003.

The image shown was acquired on 26 June 2004 by CHRIS aboard ESA's Proba microsatellite, designed to acquire hyperspectral images with a spatial resolution of 18 metres across an area of 14 kilometres. The size of a washing machine, Proba was originally launched in 2001 as a technology demonstrator, but is now operated as an ESA Earth Observation Third Party Mission.