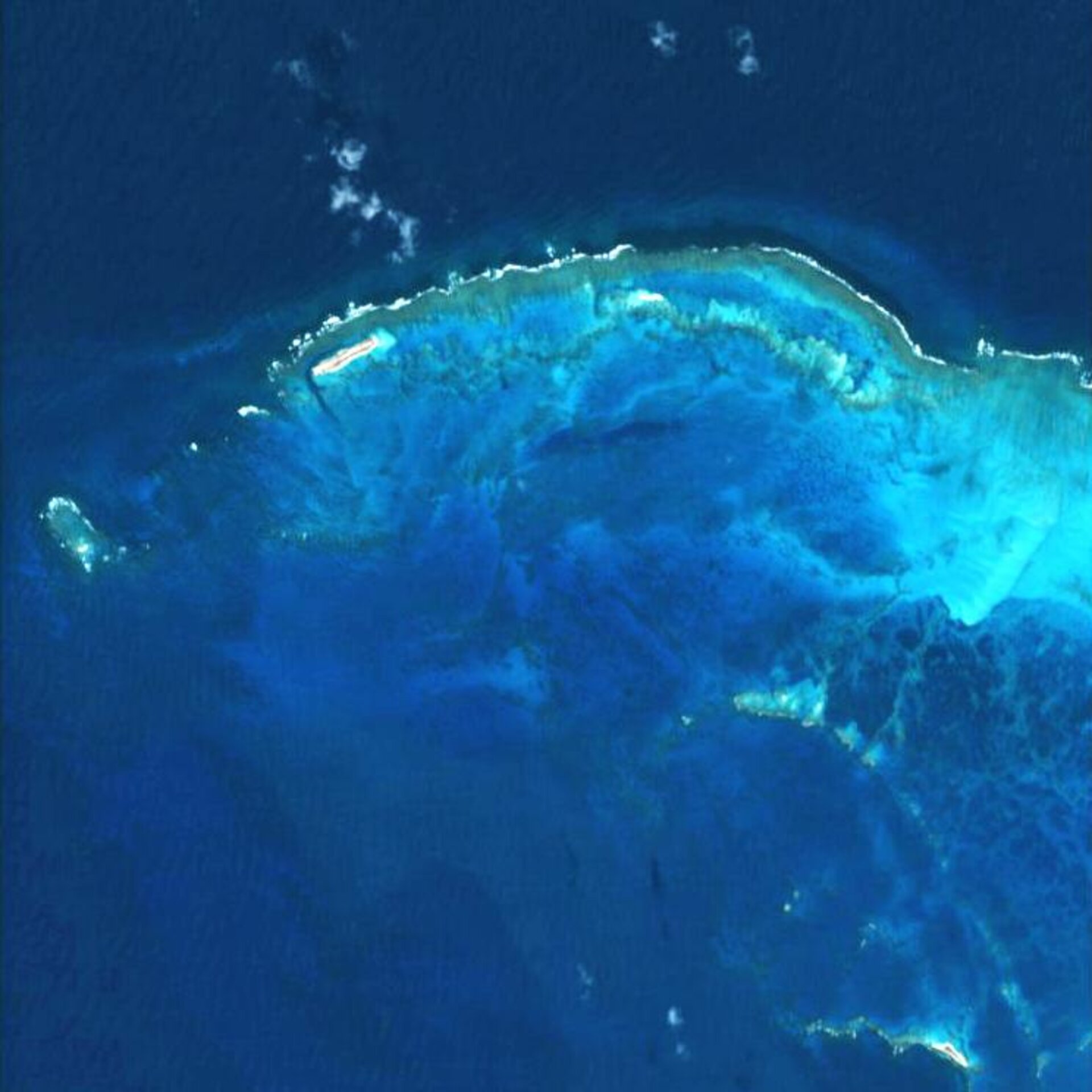 The French Frigate Shoals, highlighted in this Proba image, is an atoll consisting of a 35-kilometre crescent-shaped reef surrounding a dozen small islets located in the Pacific Ocean about 800 kilometres northwest of Honolulu, Hawaii.

The French Frigate Shoals’ coral reefs grow atop an eroded volcano that has been submerged for millions of years. The only remnant left of the volcano today is a unique 36-metre-high rock formation, named La Pérouse Pinnacle, which protrudes out of the water in the centre of the atoll (seen right of the centre).

The name of the pinnacle, as well as the shoals, commemorates French explorer Jean-François de La Pérouse whose crew nearly ran two frigate ships aground the reef in 1786.

The French Frigate Shoals is part of the Northwestern Hawaiian Islands (NWHI), a chain of atolls and small islands northwest of the main Hawaiian Islands, which are home to approximately 13,000 square kilometres of coral reefs (about 70 percent of all coral reefs found in U.S. waters) and to the threatened green sea turtle, seabirds, and the only remaining population of the endangered Hawaiian monk seal.

Located at about midpoint in the NWHI chain, the French Frigate Shoals encompasses the largest coral reef area, over 938 square kilometres, in Hawaii and has the greatest coral diversity in the NWHI, with over forty species of stony corals documented. It also houses more than 600 species of marine invertebrates, more than 150 species of algae, 18 species of sea birds and the largest proportion of endangered Hawaiian monk seals in the NWHI.

The nearly horizontal white strip seen top centre left in the image is Tern Island. The strip is a 1005-metre long runway formed in 1942 by the U.S. military to serve as a fuel stop for aircraft during World War II. Today the U.S. Fish and Wildlife Service maintains a field station there, which is staffed year-round by two permanent employees and a couple volunteers. A sign on the island reads: Population 4, Elevation 6 ft (1.8 m).

Because the animals breeding on Tern Island are sensitive to human disturbance, only specially permitted biologists and researchers are allowed there. Scientists use the infrastructure left behind by the U.S. military as a base for research from which to study all of the animals within the French Frigate Shoals.

In 2000, the French Frigate Shoals became part of the Northwestern Hawaiian Islands Coral Reef Ecosystem Reserve, which was named a national monument in 2006. With more than 362 000 sq km of atolls and reefs, the Northwestern Hawaiian Islands Monument is the largest conservation area in the U.S. and the largest protected marine area in the world. Australia’s Great Barrier Reef Marine Park was previously the world’s largest protected marine area.

ESA’s Proba satellite acquired this image on 9 January 2006 with its Compact High Resolution Imaging Spectrometer (CHRIS), designed to acquire hyperspectral images with a spatial resolution of 17 metres across an area of 13 kilometres.

More than 60 scientific teams worldwide making use of CHRIS data are meeting at ESRIN, ESA's Earth Observation Centre in Italy, from 19 to 21 September to discuss their work. The Fourth CHRIS/Proba Workshop is covering the use of the imager to study land processes and forests as well as inland and coastal waters.