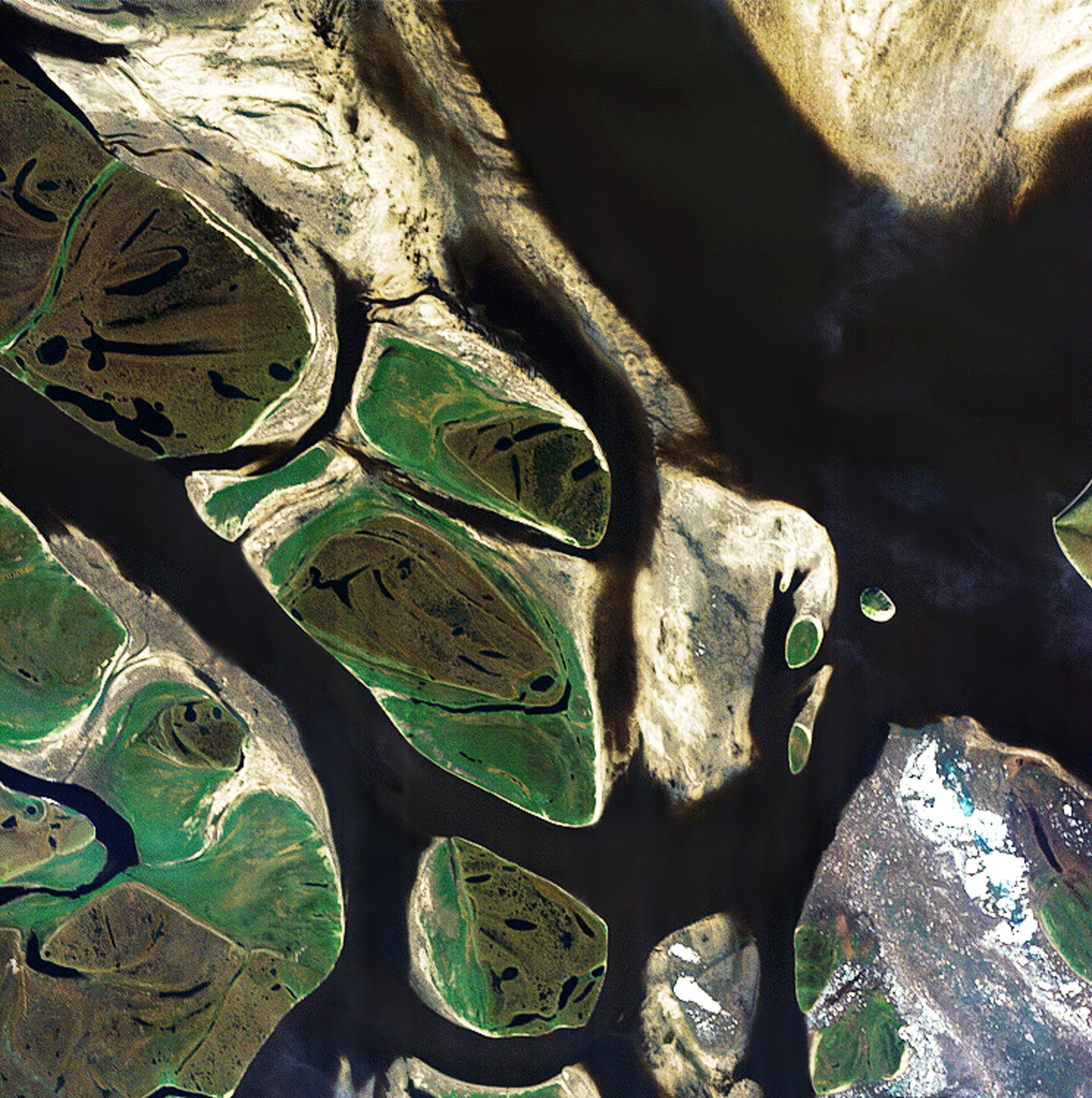 This Proba image shows the region around Samoylov Island, located within the Lena River Delta on the Laptev Sea coast of Northern Siberia. The small pear-shaped island of Samoylov in the lower middle of the image is one of the Delta's more than 1 500 individual islands.

The Lena Delta, covering an area of about 32 000 square kilometres, is a haven for Arctic wildlife that transforms for five months each summer from frozen tundra to fertile wetlands. The Delta is located at the end of the 4400-km-long course of the Lena River, one of the longest rivers in the world. It is an important breeding ground for many migratory birds and supports diverse populations of fish and several marine mammals.

The largest Delta in the Arctic, the Lena Delta is a complex landscape that has evolved over thousands of years. The Holocene (the geological era extending back from the present to the last 10 000 years) Delta incorporates parts of an older accumulation plain, dating as far back as the mid-to-late Pleistocene Era. Samoylov Island is located in the central southern part of the Lena Delta, close to the Delta apex. Covering an area of 1200 hectares, it is representative of the active and the Holocene part of the Delta, estimated to back about 7000 years.

All terraces undergo heavy changes in terms of river bank erosion, island migration or thermal erosion. Another interesting feature is the presence of river ice on some sandbanks in the lower right of the scene, which remained from the spring river ice break-up approximately two weeks earlier.

Around 14% of worldwide carbon is stored in permafrost soils and sediments, and scientific interest is growing in the role of tundra environments in the carbon cycle. In particular tundra wetlands like the Lena Delta are considered major contributors to the global carbon balance, and anticipated to be highly sensitive to climate change.

German-Russian research activity has been ongoing in the Lena Delta in the last few years, focusing on biology, soil sciences, ecology, paleo-environmental investigations and modern environmental change. The German Alfred Wegener Institute for Polar and Marine Research together with the Russian Lena Delta Reserve has placed an ecological station on Samoylov Island, and is evaluating whether to site a permanent environmental observatory there.

In order to better quantify carbon budgets in the vast Lena Delta tundra wetlands, Earth Observation is being used by researchers to upscale local field measurements, with Proba images helping to validate tundra surface and vegetation unit classification based on Landsat-7 data.

This image was acquired on 5 July 2005 by the Compact High Resolution Imaging Spectrometer (CHRIS). Built by UK-based Sira Technology, CHRIS is the main payload on ESA's Proba microsatellite, designed to acquire hyperspectral images with a spatial resolution of 18 metres across an area of 14 kilometres.