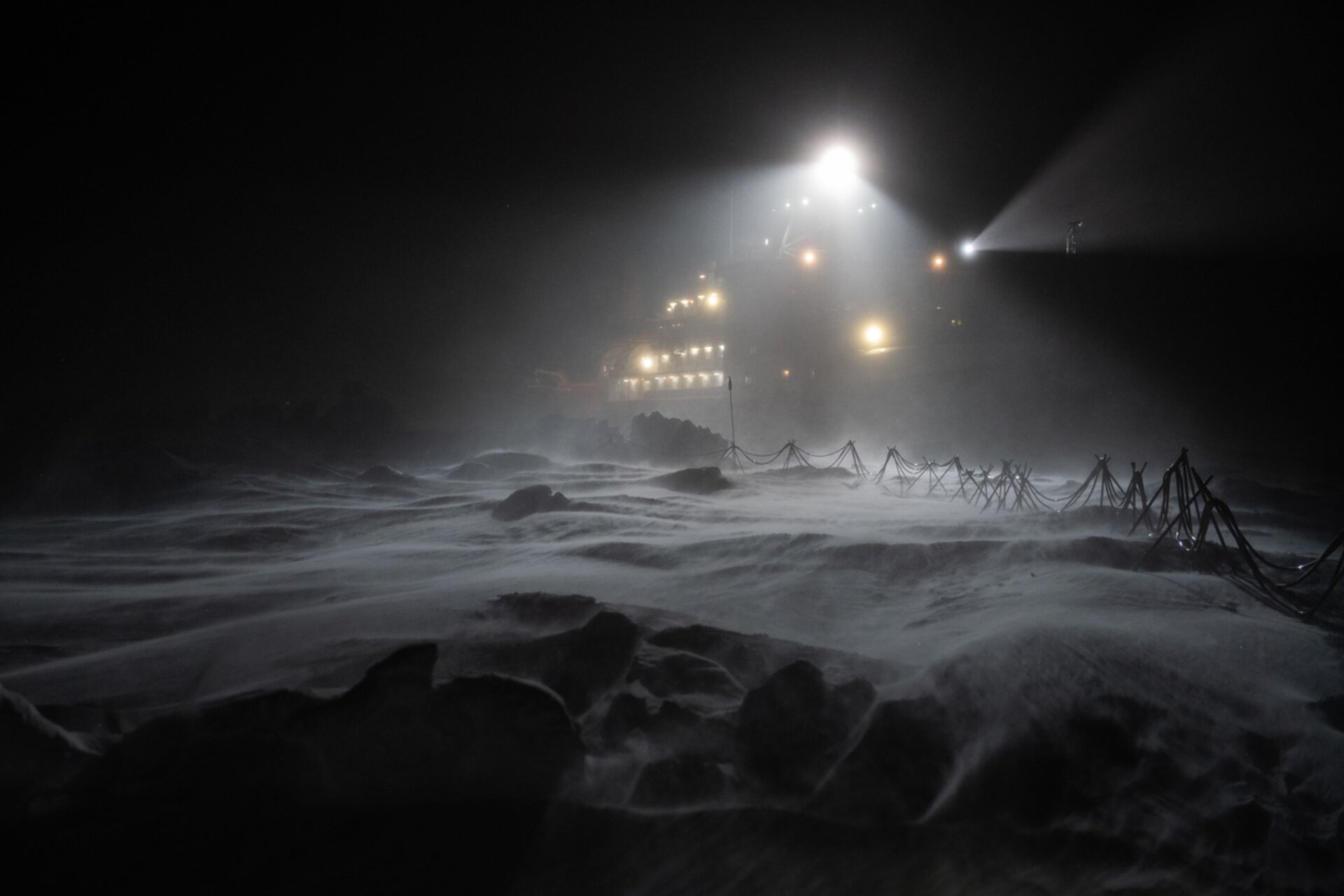 Spare a thought this Christmas for researchers hunkered down on their Polarstern icebreaker, adrift in the frozen Arctic Ocean. Subjected to temperatures as low as –45°C and the perpetual darkness of the polar winter, they are willing participants in MOSAiC – the world’s largest and longest polar research expedition. Despite the darkness, however, the researchers and crew remain aware of what is happening close by. How? With the help of radar imaging satellites.

Over the course of one year, a total of some 600 researchers from 20 countries will take part in different stages of the Multidisciplinary drifting Observatory for the Study of Arctic Climate (or MOSAiC) expedition.

After entering the Arctic Ocean in October, the Polarstern has been drifting across the central Arctic at about 7 km per day with the wind and currents expected to carry it close to the geographic North Pole before exiting next spring or summer.

On board, the scientists are carrying out multiple experiments on the sea ice around the ship to better understand the impact of climate change on sea ice and the Arctic environment. The team has now established hundreds of instruments on the sea ice surrounding the ship within a distance of 50 km.

Despite the darkness currently enveloping the ship as it drifts through the frozen sea, the researchers and crew are not blind and remain aware of what is happening thanks to radar imaging satellites of Europe’s Copernicus programme, Canada, Germany and Japan.

The crew and scientists monitor the sea ice and generate remarkable maps of the sea-ice floes surrounding the ship. These radar satellites cross the Arctic on a daily basis and carry with them their own source of illumination, which allows them to pierce through the Arctic winter darkness, continuously sensing and mapping the sea-ice conditions below.

Suman Singha, from the German Aerospace Center’s Remote Sensing Technology Institute, helps coordinate the acquisition of images from different satellites and is responsible for relaying the precious information further to the ship.

“This information is very much needed at Polarstern, especially at the beginning of the expedition, when the challenge was to find the right kind of ice floe able to harbour both the Polarstern and the deployment of all the scientific instruments on the ice around the ice breaker,” says Dr Singha.

“Here we made use of high-resolution radar images from the German TerraSAR-X satellite to help locate the best-possible floe, which has since been given the name Fortress. Monitoring the safety of the floe thus remains a constant challenge.”

Also contributing to the international mapping effort are Europe’s Copernicus Sentinel-1 satellites which provide continual wide-area coverage of the site, helping to follow and predict the ever-changing drift of the sea ice up to 300 km away from the ship.

The Japanese ALOS-2 satellite with its PalSAR-2 sensor uses a much longer wavelength than both Copernicus Sentinel-1 and TerraSAR-X to map sea-ice floes and conditions below.

ESA’s Malcolm Davidson said, “Wavelength matters when it comes to radar satellites as a particular wavelength greatly influences the information provided by the satellite.

“In Europe we are very interested in the additional information that ALOS-2 can provide on sea-ice conditions especially now that we are developing our own long-wavelength radar satellite called the L-band Synthetic Aperture mission,  ROSE-L – which is one of the six Copernicus high-priority candidate missions.

For instance, detecting sea-ice ridges is critical for safe navigation in the Arctic and these are much easier to identify with ALOS-2 than with the existing European satellites.”

While Polarstern now drifts through the frozen and dark ocean for the coming months, the radar eyes in the sky will continue to monitor its progress through the Arctic and accompany the researchers through the rest of this remarkable expedition.