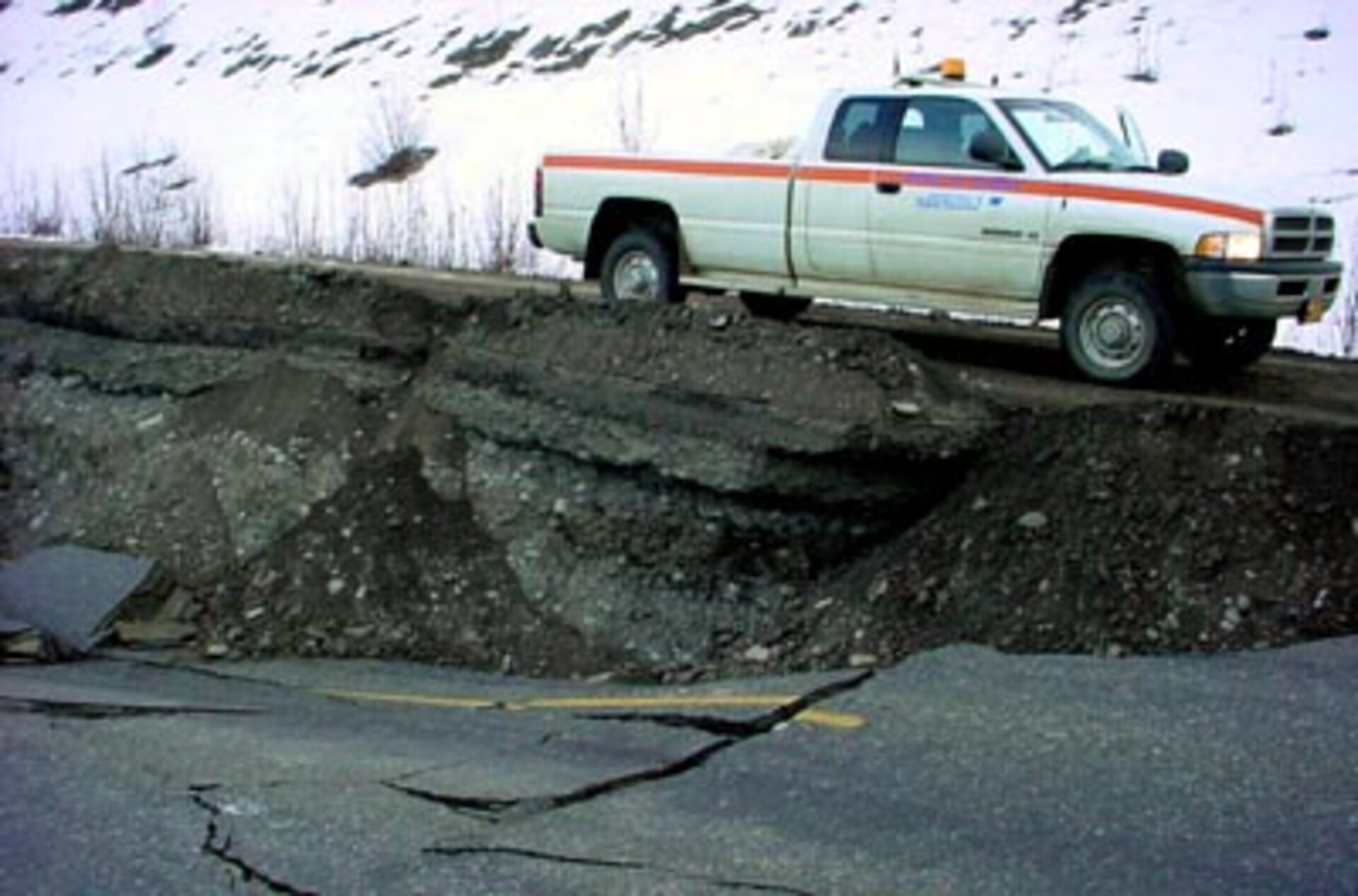 A violent earthquake that cracked highways in Alaska set the sky shaking as well as the land, an ESA-backed study has confirmed.

Their paper has been published in the scientific journal Geophysical Research Letters. The research itself was carried out in support of ESA’s Space Weather Applications Pilot Project, aimed at developing operational monitoring systems for space conditions that can influence life here on Earth.

The ionosphere is an atmospheric region filled with charged particles that blankets the Earth between altitudes of about 75 to 1000 km. It has a notable ability to interfere with radio waves propagating through it.

In the particular case of GPS navigational signals, received on Earth from orbiting satellites, fluctuations in the ionosphere – known as 'ionospheric scintillations' - have the potential to cause signal delays, navigation errors or in extreme cases several hours of service lockouts at particular locations.

But while such interference can be an inconvenience for ordinary GPS users, it represents a boon for scientists. By measuring even much smaller-scale shifts in GPS signal propagation time - caused by variations in local electron density as the signal passes through the ionosphere - researchers have at their fingertips a means of mapping ionospheric fluctuations in near real time.

The French and US team made use of dense networks of hundreds of fixed GPS receivers in place across California. These networks were originally established to measure small ground movements due to geological activity, but they can also be utilised to plot the ionosphere structure across three dimensions and in fine detail.

Then when the Denali earthquake occurred on 3 November 2002, the team had a chance to use this technique to investigate another distinctive property of the ionosphere, its ability to work like a natural amplifier of seismic waves moving across the Earth’s surface.

Previous research has established that shock waves from Rayleigh Waves in turn set up large-scale disturbances in the ionosphere. A one millimetre peak-to-peak displacement at ground level can set up oscillations larger than 100 metres at an altitude of 150 km.

What the team were able to do following the Denali quake was detect a distinctive wavefront moving through the ionosphere. "Using the network allowed us to observe the propagation of the waves," explained co-author Vesna Ducic. "We could also separate the small total electron content signal from the very large total electron content variations related to the daily variation of the ionosphere."

The team observed a signal two to three times larger than the noise level, arriving about 660 to 670 seconds after the arrival of Rayleigh Waves on the ground. And because around six GPS satellites are visible to every ground receiver they were able to calculate the altitude of maximum perturbation – around 290 to 300 km up.

The signals were weak and only sampled every 30 seconds, with a maximum resolution of 50 km and the overall noise rate high. But the ionospheric signal observed had a clear pattern consistent with models of seismic behaviour. The hope is that the technique can be improved in future, and used to detect earthquakes in areas without seismic detectors, such as the deep ocean or near islands.

"In the framework of Galileo we plan to develop this research,” said Ducic. "Galileo will double the number of satellites and therefore will allow much more precise maps of the ionosphere. We can also foresee that Europe will develop a dense network of Galileo/GPS stations that will take part in the monitoring of these phenomena.

"ESA, together with the French Ministry of Research and CNES have already decided to fund a pre-operational project called SPECTRE - Service and Products for Ionosphere Electronic Content and Tropospheric Refractive index over Europe from GPS - devoted to the high-resolution mapping of the ionosphere. We will be carrying out mapping above Europe as well as California.

"These investigations will support the French space agency CNES’s DEMETER (Detection of Electro-Magnetic Emissions Transmitted from Earthquake Regions) microsatellite, to be launched in 2004 and devoted to the detection in the ionosphere of seismic, volcanic and man-made signals. These ESA activities will be performed in the framework of the Space Weather Applications Pilot Project."

The Space Weather Applications Pilot Project is an ESA initiative which has already begun to develop a wide range of application-oriented services based around space weather monitoring.

The co-funded services under development - of which this project is one - also include forecasting disruption to power and communication systems, and the provision of early warning to spacecraft operators of the hazards presented by increased solar and space weather activities. The hope is that an a seismic detection service based on ionospheric measurements may in future supplement existing resources in Europe and elsewhere.