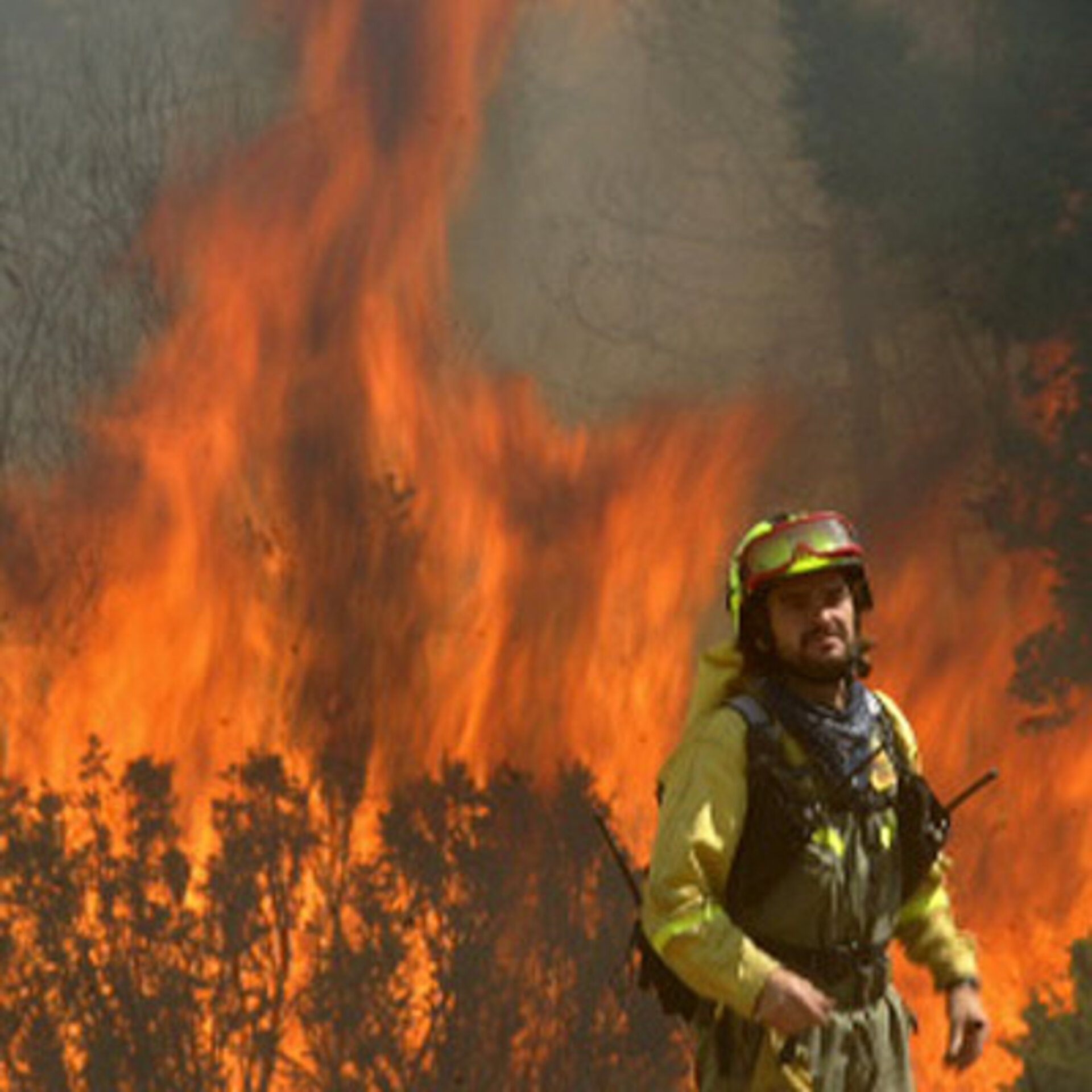 The damage done to Spain's Guadalajara province by July's fierce forest fire has been measured from space by Envisat.

The four-day blaze began on 16 July, when a barbecue in pine woodland went out of control, spread by strong winds across a very dry landscape. Eleven volunteer firefighters died tackling the blaze, which at its height threatened to engulf the nearby villages of Selas and Ablanque. Firefighters succeeded in creating a fire-break to stop its spread, backed up by water-bombing aircraft.

"MERIS measures the solar radiation reflected by the Earth in 15 selectable spectral bands in the visible and near infra-red," explained González-Alonso. "We utilised bands that were particularly sensitive to vegetation, then performed an automatic matched filtering analysis on the stacked bands to designate 'endmembers' - spectrally pure areas that could be visually classified as very burnt.

"The file obtained was reclassified by modifying the histogram or graphical bar used, so pixels with values over 0.3 were considered burnt. The resulting perimeter gives us a burnt area estimate of This figure compares well to forest fire burnt area estimates from other sources of 12 000 hectares.

"The results of our completed study will be sent to the Spanish Ministry of Environment for economic, social and ecological damage assessment," González-Alonso added. "Our team has been studying the use of MERIS data for fire-damage assessment - the obtaining of images from ESA in near-real time via the internet being an essential point in this kind of application."

"The results achieved so far show that estimates can be extremely useful not only in establishing the scale of the damage but also for the subsequent forest renewal projects and for subsidy management."

MERIS's capability is being employed in a variety of different projects, including as part of GLOBCARBON, a project to better characterise changes in the amount of carbon on a global basis across ten years from 1997.

Monitoring the location, duration and affected area of forest fires is an important part of GLOBCARBON, since blazes are a major way for carbon to be released from land-based 'sinks' into the atmosphere. The project, part of ESA's Data User Element, should improve scientific understanding of the carbon cycle and improve climate change modelling.

MERIS is also being utilised in combination with other satellite sensors for the Risk-EOS initiative, which is rolling out a series of operational services for fire and flood risk management, with burn scar mapping initially being offered within a total area of 180 000 square kilometres across two parts of Europe: Spain's Castilla y Leon Region and the Éntente area of southern France.

Risk-EOS is taking place as part of the GMES Services Element (GSE), a suite of Earth Observation services being developed as part of the Global Monitoring for Environment and Security (GMES) joint endeavour between ESA and the European Commission, aimed at merging ground- and space-based information sources to develop a comprehensive planetary monitoring capability in support of Europe's environment and security goals.

A follow-on to MERIS is planned as payload for the GMES-1 spacecraft, intended to support operational GMES services into the next decade.