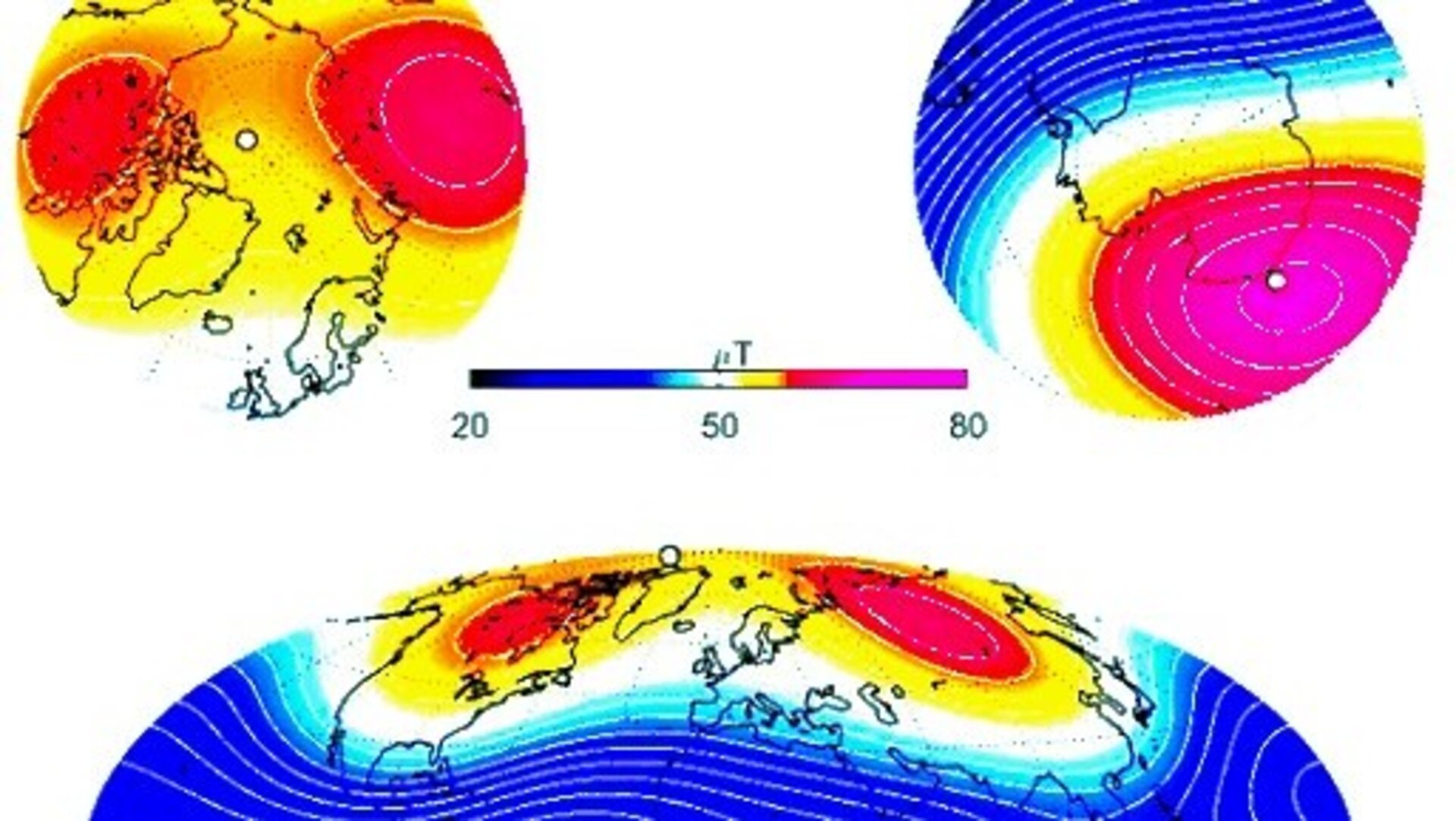 With more than two years of measurements by ESA’s Swarm satellite trio, changes in the strength of Earth's magnetic field are being mapped in detail.

Launched at the end of 2013, Swarm is measuring and untangling the different magnetic signals from Earth’s core, mantle, crust, oceans, ionosphere and magnetosphere – an undertaking that will take several years to complete.

Although invisible, the magnetic field and electric currents in and around Earth generate complex forces that have immeasurable effects on our everyday lives.

The field can be thought of as a huge bubble, protecting us from cosmic radiation and electrically charged atomic particles that bombard Earth in solar winds. However, it is in a permanent state of flux.

Presented at this week’s Living Planet Symposium, new results from the constellation of Swarm satellites show where our protective field is weakening and strengthening, and importantly how fast these changes are taking place.

The animation above shows the strength of Earth's magnetic field and how it changed between 1999 and May 2016.

Blue depicts where the field is weak and red shows regions where it is strong. As well as recent data from the Swarm constellation, information from the CHAMP and Ørsted satellites were also used to create the map.

It shows clearly that the field has weakened by about 3.5% at high latitudes over North America, while it has strengthened about 2% over Asia. The region where the field is at its weakest – the South Atlantic Anomaly – has moved steadily westward and weakened further by about 2%.

In addition, the magnetic north pole is wandering east, towards Asia.

The second animation shows the rate of change in Earth’s magnetic field between 2000 and 2015. Regions where changes in the field slowed are shown in blue while red shows where changes speeded up. 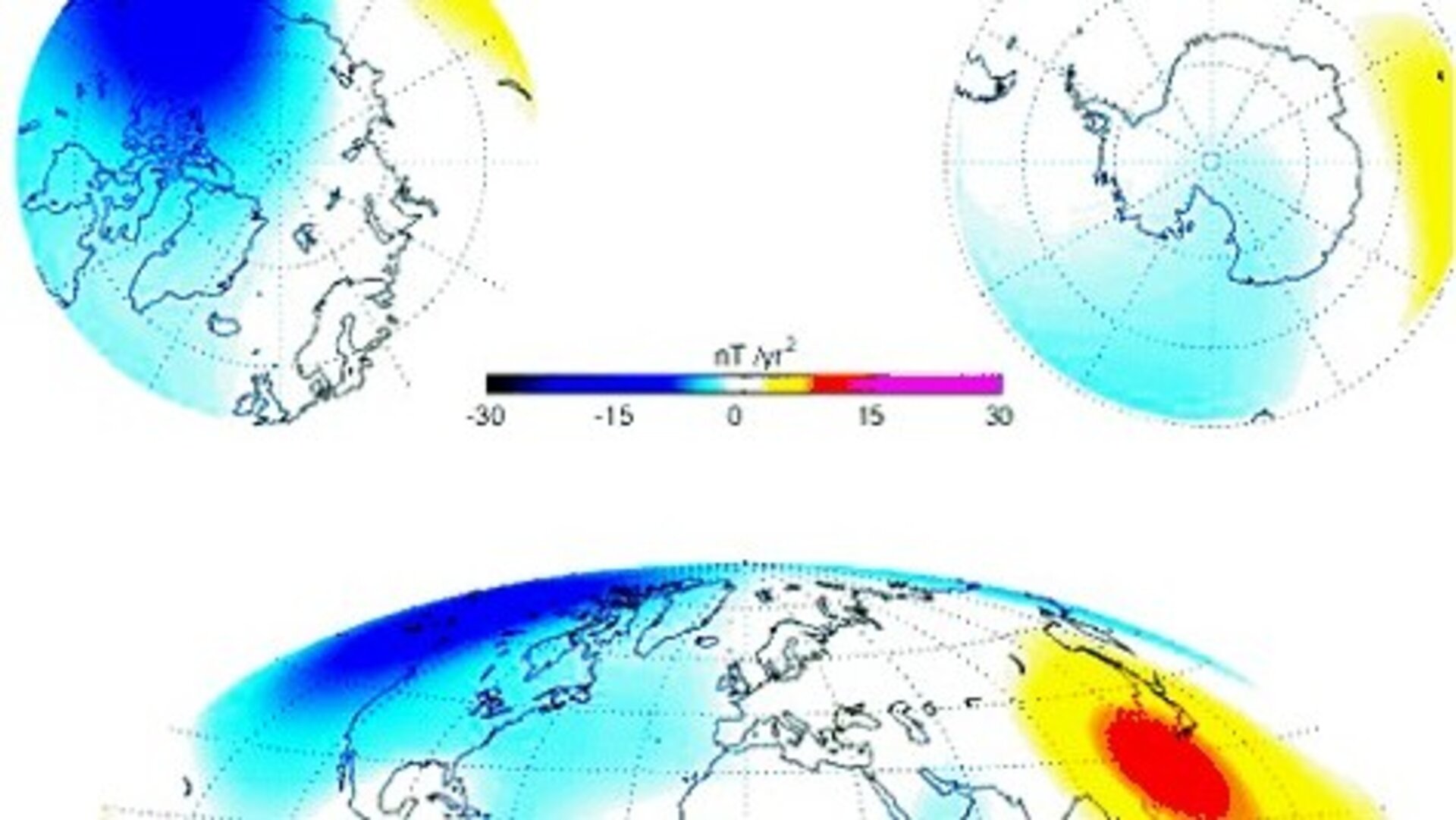 For example, changes in the field have slowed near South Africa, but have changed faster over Asia.

The magnetic field is thought to be produced largely by an ocean of molten, swirling liquid iron that makes up our planet’s outer core, 3000 km under our feet. Acting like the spinning conductor in a bicycle dynamo, it generates electrical currents and thus the continuously changing electromagnetic field.

It is thought that accelerations in field strength are related to changes in how this liquid iron flows and oscillates in the outer core.

Chris Finlay, senior scientist at DTU Space in Denmark, said, “Swarm data are now enabling us to map detailed changes in Earth's magnetic field, not just at Earth's surface but also down at the edge of its source region in the core.

“Unexpectedly, we are finding rapid localised field changes that seem to be a result of accelerations of liquid metal flowing within the core.”

Rune Floberghagen, ESA’s Swarm mission manager, added, “Two and a half years after the mission was launched it is great to see that Swarm is mapping the magnetic field and its variations with phenomenal precision.

“The quality of the data is truly excellent, and this paves the way for a profusion of scientific applications as the data continue to be exploited.”

It is clear that ESA’s innovative Swarm mission is providing new insights into our changing magnetic field. Further results are expected to lead to new information on many natural processes, from those occurring deep inside the planet to weather in space caused by solar activity.

In turn, this information will certainly yield a better understanding of why the magnetic field is weakening in some places, and globally.