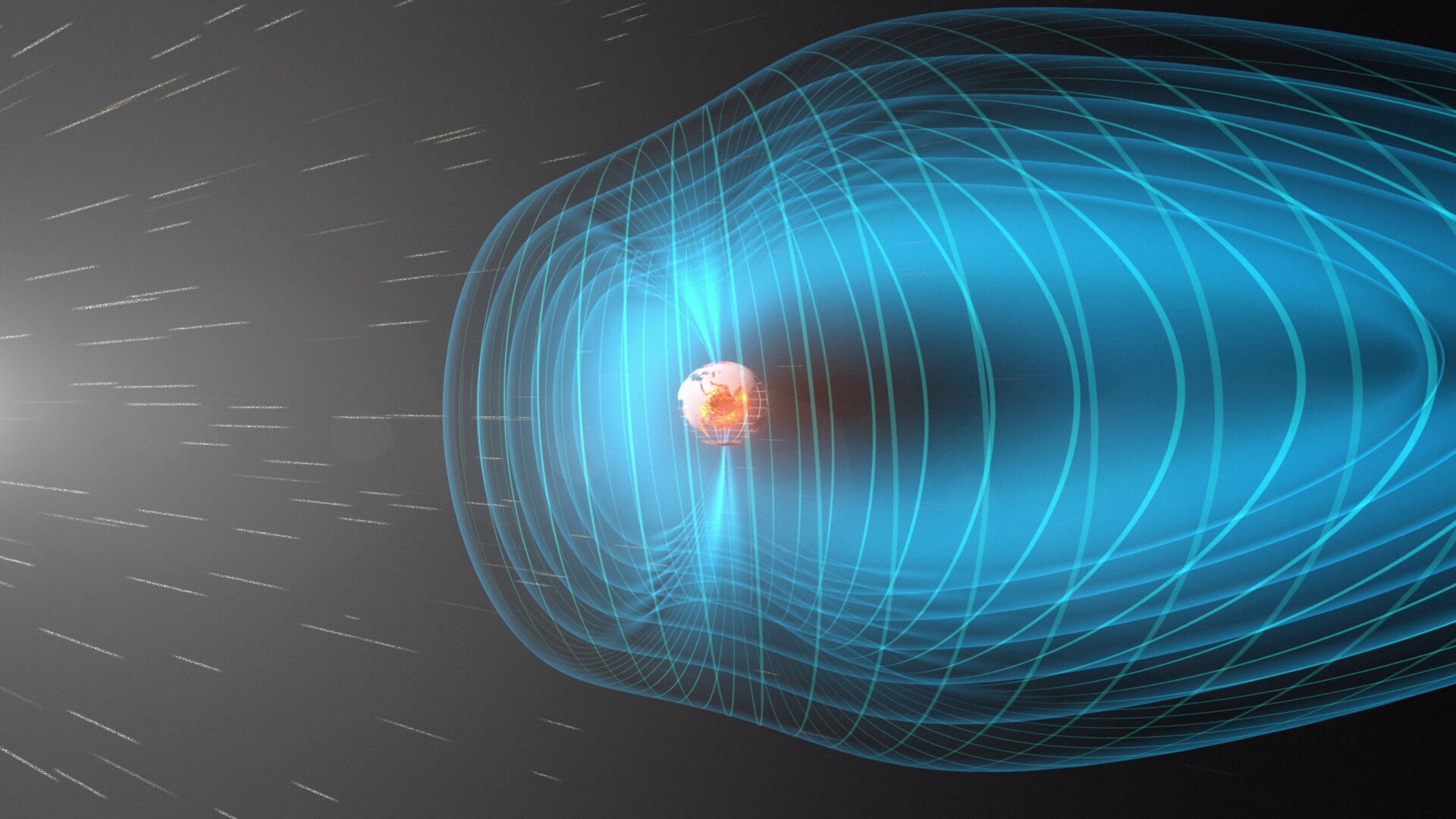 In simple terms, Earth’s magnetic field behaves as if there were a powerful bar magnet at the centre of the planet, tilted at about 11° to the axis of rotation.

However, in reality, the processes that generate the field are far more complex. The magnetic field is thought to be produced largely by an ocean of superheated, swirling liquid iron that makes up the outer core 3000 km under our feet. Acting like the spinning conductor in a bicycle dynamo, it generates electrical currents and thus the continuously changing electromagnetic field.

Other sources of magnetism are the minerals in Earth’s mantle and crust, while the ionosphere and the magnetosphere also play a role. Since salt water is conductive, oceans make an additional, albeit weak, contribution to the magnetic field.

Although the Ancient Chinese invented the first compass and so were aware of a magnetic force 2000 years ago, our understanding of how Earth’s dynamo has been sustained for billions of years and why it changes is still limited.

Today, there are concerns that the force that protects our planet is weakening and may even be on the verge of reversing polarity. Over the last 150 years, the magnetic field has lost about 15% of its strength.

For example, the South Atlantic Anomaly is an area where the magnetic field is particularly weak – in fact, it is only half as strong as in Europe. This is problematic for satellites orbiting Earth, and the majority of technical faults occur when they pass through this region.

The difference in location between magnetic north and true north is called the magnetic deviation; not only is the gap getting bigger, it is shifting at an increasing rate. Prior to 1994, it was estimated that the magnetic north pole was moving at about 10 km a year, but since 2001 this has increased to around 65 km a year.

Pole reversals are a natural phenomenon, evidence of which comes from the ocean floor. When new crust is created though volcanic activity, atoms of iron in the molten rock act like compasses, aligning themselves with the magnetic field and retaining their orientation once the rock has solidified.

These magnetic ‘fingerprints’ in sediments reveal that over the last 200 million years the poles have reversed, on average, about once every 200 000–300 000 years. Reversals are a slow process and do not happen with any regularity. Nevertheless, the last time this happened was about 780 000 years ago, so we are now overdue for a reversal.

In June 2014, after just six months collecting data, Swarm confirmed the general trend of the field’s weakening, with the most dramatic declines over the Western Hemisphere. But in other areas, such as the southern Indian Ocean, the magnetic field had strengthened since January. The measurements also confirmed the movement of magnetic North towards Siberia. These changes are based on the magnetic signals stemming from Earth’s core.