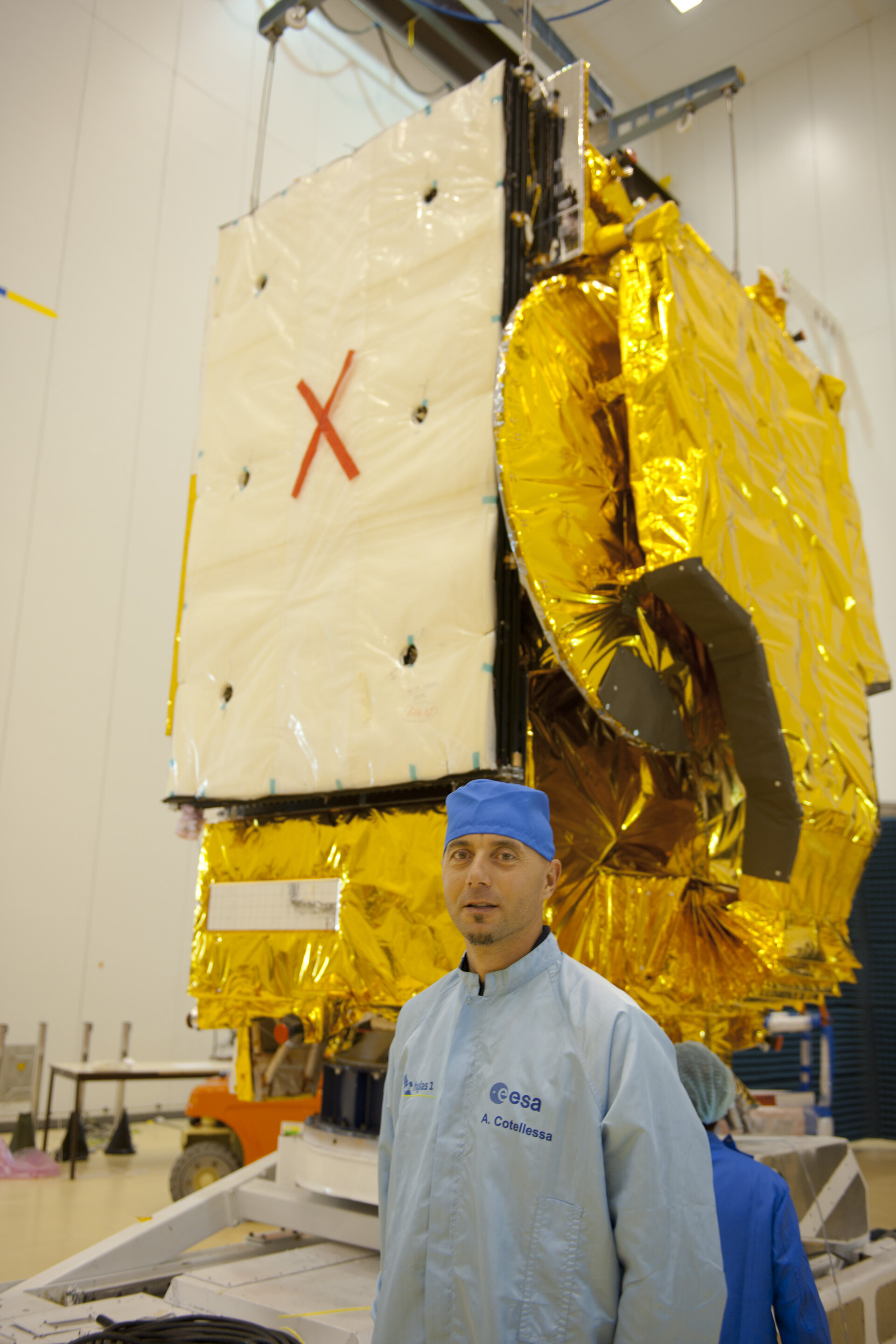 Being launched this Friday 26 November, the Hylas-1 telecommunications satellite is a new way for ESA to work: partnering a commercial operator to ensure that advanced European technologies get to orbit more rapidly than otherwise.

Andrea Cotellessa has overseen this ground-breaking mission for ESA over the last five years.

What is your role in the Hylas-1 mission?

What have you most enjoyed about working on Hylas-1?

Hylas-1 is the first satellite contract ESA Telecom has signed since the Artemis mission, which was launched almost 10 years ago. I was involved there as Assembly, Testing and Verification (AIV) Manager. It has been good to go back to a ‘satellite job’ and to follow it through from the preliminary proposal, back in March 2005, all the way to the launch campaign in Kourou.

Being the first public–private partnership contract to result in a full satellite system, we have been continuously breaking new ground to keep the project and the partners on track.

We had programmatic, financial and technical challenges in the unusual context of a commercial satellite procurement. But what I enjoyed most in this process is the focus, professionalism, competence and motivation of my colleagues, thanks to whom we have reached this point.

What was the greatest challenge?

Compared to typical ESA missions, the Hylas-1 project team is very small, more comparable in size to what a satellite operator would have for a commercial satcom procurement. Of course we could rely on the rest of the ESA organisation and all its specialist knowledge, whenever we needed it.

But it also meant we had to work across the board and be directly involved in all the activities of the project. In addition, the fact that Hylas-1 is the first satellite procured by our partner, Avanti Communications, means we have had an important advisory role.

There were so many hurdles on the way to Kourou that it’s hard to single out which was the hardest to overcome. Just to mention a few: completing the qualification of the advanced technologies of the payload equipment, some finance issues on the business side, and changes to our planned launch vehicle some five times in all. At times some apparently innocuous issues turned into major challenges.

What has been the most interesting element?

I believe that having worked in close contact with the Indian Space Research Organisation (ISRO), which supplied the satellite platform, has been a rare and valuable opportunity. It has been a great experience from both the professional and cultural point of view. I appreciated the fact that ISRO designs and builds its satellites entirely in their own facilities.

This is one of Europe’s most-travelled satellites: payload built in the UK and the platform assembled in India for a South American launch. How much travelling was needed to keep up with it?

In personal terms we travelled a lot, and in a relatively short period, but overall we stayed well within the normal amounts of travel that come with satellite projects of this type. We haven’t travelled to India a great deal, not until the payload was transferred from Portsmouth to Bangalore at the end of October 2009. But since then, yes, it has been plenty of spicy curry!

How did you start working in the space industry?

I am originally an aeronautical engineer, graduated from the University of Rome. I came to ESA for a year at ESTEC in Noordwijk, the Netherlands, in 1992 as a young graduate trainee. I went on to join what is now Thales Alenia Space in Rome where I worked for several years, mostly on telecommunication satellite programmes.

How long have you worked at ESA?

I came back to ESA in 1999 as a Test Manager in the ESTEC Testing Division, where I provided AIV support to the Automated Transfer Vehicle project and managed an important test for the Hubble Space Telescope solar arrays.

In early 2001 I moved to the Artemis project, after which I stayed with the Telecommunication Directorate and ran several activities in their preparatory studies area as well as satellite-based applications, with the aim of attracting new companies and small- and medium-sized enterprises to ESA’s Telecommunication Programmes.

I served as Artemis Project Manager until recently, during which we demonstrated the great performance of data relaying from space. When Hylas-1 materialised, I had no doubts in my mind about what I wanted to do.

What comes next, after launch?

After the launch of Hylas-1, the real satellite mission starts. We have important an in-orbit testing phase, to be performed from the ESA ground station at Redu in Belgium. It will be followed by a phase in which the full Hylas-1 telecommunications system will be tested and validated within the satellite and ground infrastructure.

We will still be busy with Hylas-1 for another 18 months after launch, following up the behaviour of the payload that EADS Astrium has developed with our support.

Any advice for anyone considering a space career?

I am afraid anyone reading this interview has already fallen into the space business web! I firmly believe in intellectual honesty in approaching the challenges in our profession. Keep the focus on your goal, but be prepared to accept setbacks and small defeats. And have respect – for your colleagues at work and for the people in industry whose deliverables are so essential for our projects. Maybe the prolonged exposure to Indian culture has helped after all!