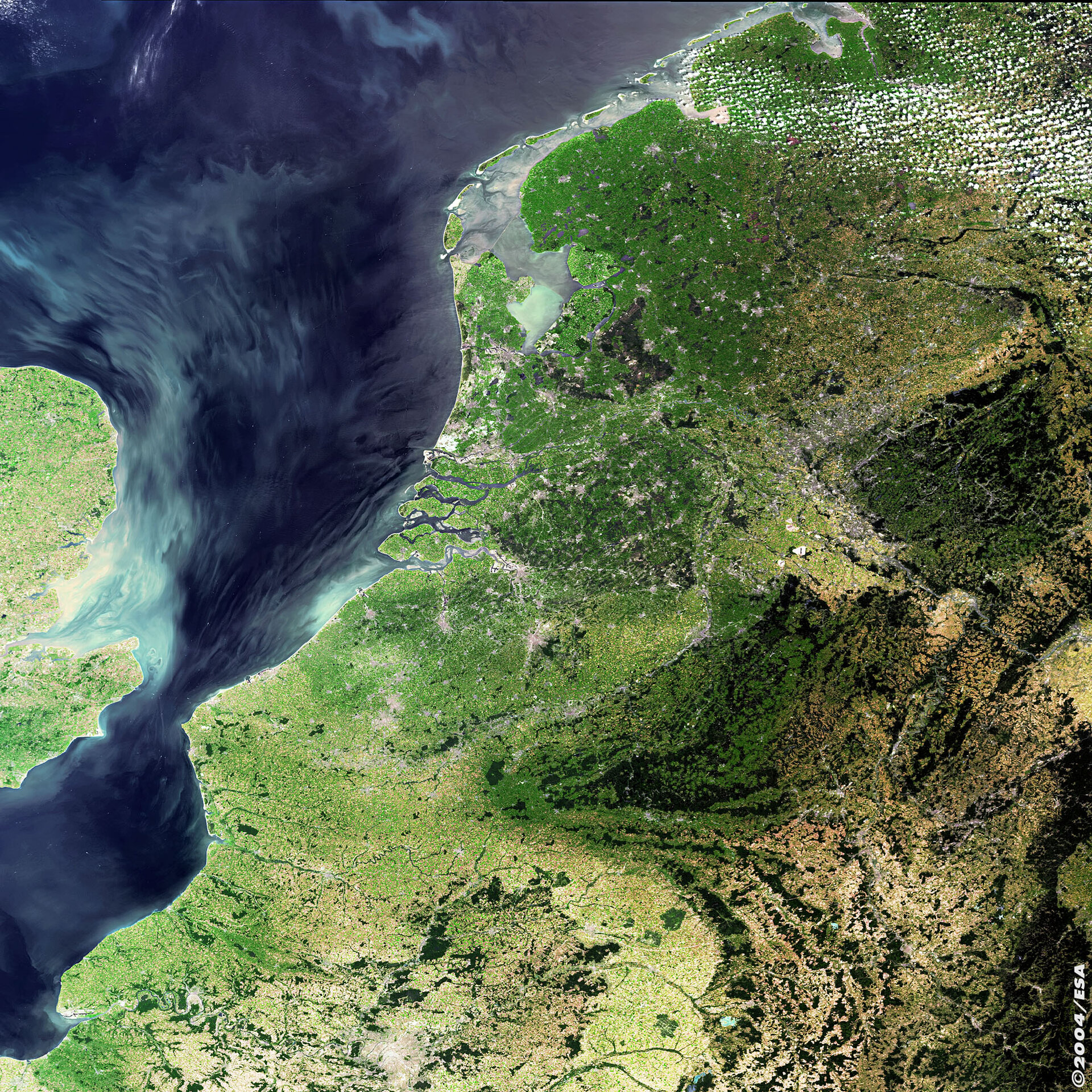 Benelux as seen by Envisat

The green landscapes of Belgium, the Netherlands and Luxembourg – collectively known as Benelux – as seen by Envisat, along with a corner of France and the south-east coast of the United Kingdom across the English Channel (La Manche).

The collective term Benelux – from the first letters of each nation – originated from the Benelux Economic Union, which entered force in 1948 but has since been superseded by the European Union it helped inspire.

The three countries have a combined population of 27 million people, living in fertile, low-lying territory. Grey pixels seen on the image correspond to built-up areas: Benelux is the most densely populated region in Europe.

The most easterly country in the image is the Netherlands, located at the mouths of three major European rivers: the Rhine, the Meuse (Mass) and the Schelde, the latter just across from the Belgian border.

Clearly visible on the coast is the westerly section of the Waddenzee (Wadden Sea), a body of water and associated wetlands extending into Germany. Directly south of the Waddenzee are the IJsselmeer and Markermeer freshwater lakes. At the southern tip of the Markermeer is Amsterdam, with The Hague and Rotterdam further along the coast.

Just north of The Hague in the coastal town of Noordwijk is located ESA's European Space Technology Research Centre (ESTEC), where Envisat was designed, integrated and tested before being flown to French Guiana for launch in March 2002.

South of the Netherlands is Belgium, with the major cities of Antwerp and Brussels visible along with multiple settlements including Charleroi and Namur along the course of the Sambre River.

Directly east of southern Belgium is the small land-locked nation of Luxembourg, located within the darker greenery of the Ardennes, a region of dense forests and rolling hills.

Towards the western edge of the image we enter the Pas-de-Calais department in northern France, including the coastal cities of Calais and Dunkirk. Across the Channel is located the UK port of Dover. Sedimentary outflow from the River Thames is clearly seen – the same phenomena can be seen at smaller scales at the other river mouths in the image.

This 14 July 2003 image was acquired by Envisat's Medium Resolution Imaging Spectrometer (MERIS) in Full Resolution mode. It has a spatial resolution of 300 metres and covers 672 x 672 kilometres.