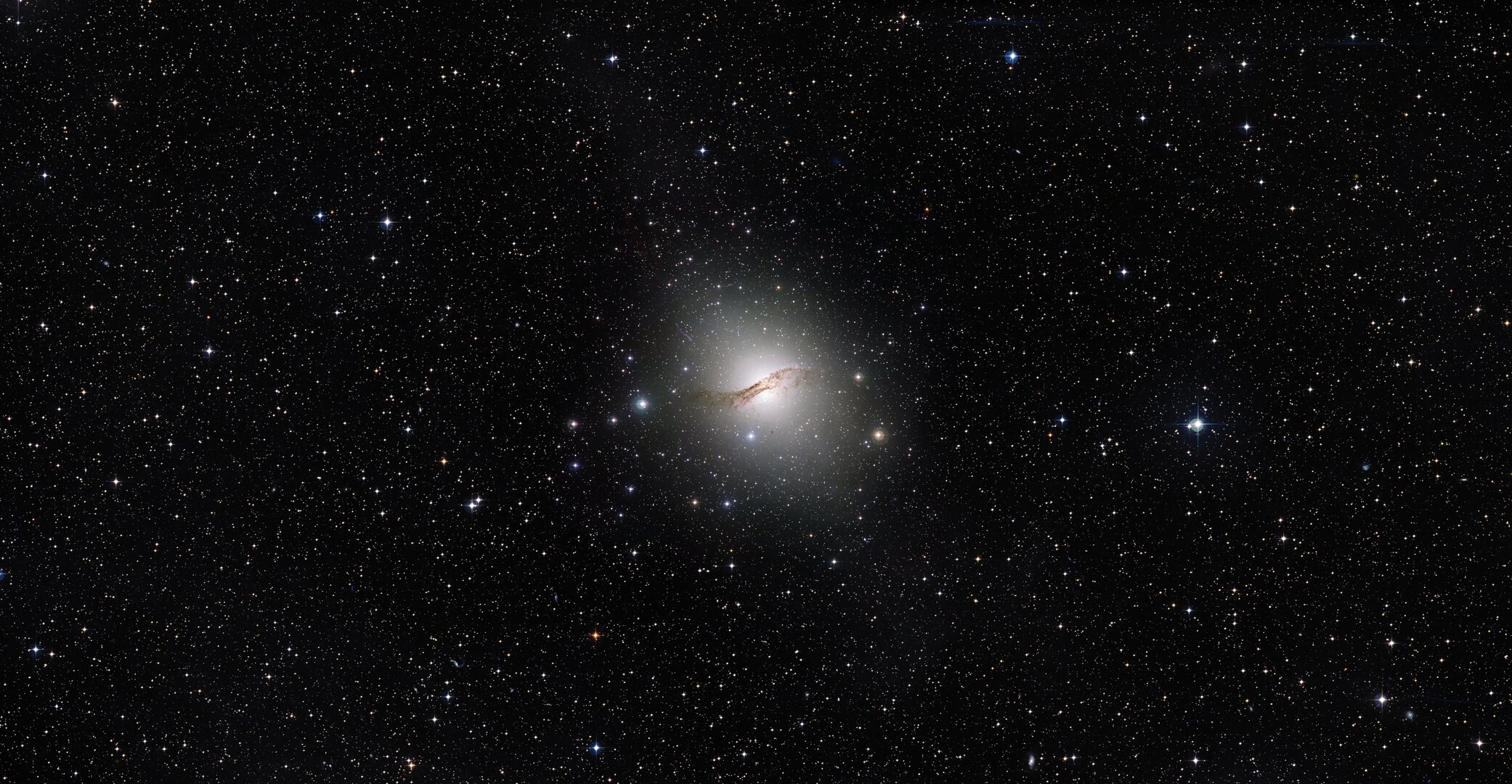 Astronomers using the NASA/ESA Hubble Space Telescope have probed the extreme outskirts of the stunning elliptical galaxy Centaurus A. The galaxy’s halo of stars has been found to extend much further from the galaxy’s centre than expected and the stars within this halo seem to be surprisingly rich in heavy elements. This is the most remote portion of an elliptical galaxy ever to have been explored.

There is more to a galaxy than first meets the eye. Extending far beyond the bright glow of a galaxy's centre, the swirling spiral arms, or the elliptical fuzz, is an extra component: a dim halo of stars sprawling into space.

These expansive haloes are important components of a galaxy. The halo of our own galaxy, the Milky Way, preserves signatures of both its formation and evolution. Yet, we know very little about the haloes of galaxies beyond our own as their faint and spread-out nature makes exploring them more difficult. Astronomers have so far managed to detect very few starry haloes around other galaxies.

Now, by utilising the unique space-based location of the NASA/ESA Hubble Space Telescope and its sensitive Advanced Camera for Surveys and Wide Field Camera 3, a team of astronomers has probed the halo surrounding the prominent giant elliptical galaxy Centaurus A, also known as NGC 5128, to unprecedented distances. They have found that its halo spreads far further into space than expected and does so in an unexpected form.

"Tracing this much of a galaxy's halo gives us surprising insights into a galaxy's formation, evolution, and composition," says Marina Rejkuba of the European Southern Observatory in Garching, Germany, lead author of the new Hubble study. "We found more stars scattered in one direction than the other, giving the halo a lopsided shape — which we hadn't expected!"

Along the galaxy's length the astronomers probed out 25 times further than the galaxy's radius — mapping a region some 450 000 light-years across. For the width they explored along 295 000 light-years, 16 times further than its "effective radius". These are large distances if you consider that the main visible component of the Milky Way is around 120 000 light-years in diameter. In fact, the diameter of the halo probed by this team extends across 4 degrees in the sky — equivalent to eight times the apparent width of the Moon.

"Even at these extreme distances, we still haven't reached the edge of Centaurus A's halo, nor have we detected the very oldest generation of stars," adds co-author Laura Greggio of INAF, Italy. "This aged generation is very important. The larger stars from it are responsible for manufacturing the heavy elements now found in the bulk of the galaxy's stars. And even though the large stars are long dead, the smaller stars of the generation still live on and could tell us a great deal."

The small quantity of heavy elements in the stellar haloes of large spiral galaxies like the Milky Way, is thought to originate from the way that the galaxies formed and evolved, slowly pulling in numerous small satellite galaxies and taking on their stars. For Centaurus A, the presence of stars rich in heavy elements in such remote locations suggests a single past merger with a large spiral galaxy. This event would have ejected stars from the spiral galaxy's disc and these are now seen as part of Centaurus A's outer halo.

"Measuring the amount of heavy elements in individual stars in a giant elliptical galaxy such as Centaurus A is uniquely the province of Hubble — we couldn't do it with any other telescope, and certainly not yet from the ground," adds Rejkuba. "These kinds of observations are fundamentallyimportant to understanding the galaxies in the Universe around us."

These results are being published online in Astrophysical Journal on the 22 July and will appear in the 10 August 2014 issue.

More information about this image and Hubble in general can be found here.