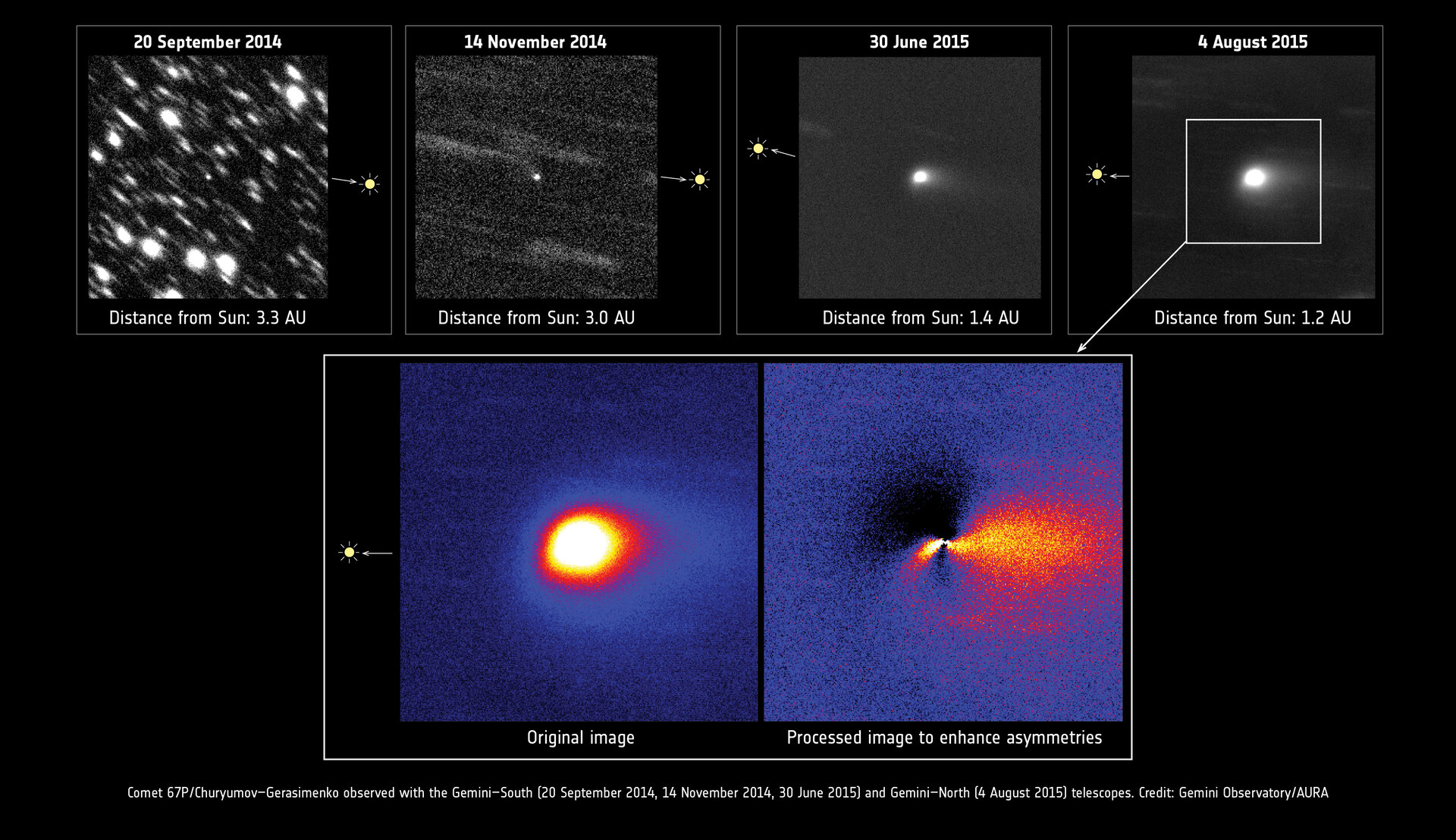 This series of images of Comet 67P/Churyumov–Gerasimenko was collected between 2014 and 2015 using the Association of Universities for Research in Astronomy’s Gemini Observatory. The first three images were obtained with the Gemini-South telescope, in Chile, while the fourth image was taken with the Gemini-North telescope, on Mauna Kea, Hawaii.

All images are centred on the comet and were obtained by stacking several short exposures; stars are also visible as streaks. North is up, east to the left; the direction to the Sun is indicated for each frame.

In the first image of the upper row, taken on 20 September 2014, the comet appears nearly point-like. At the time, it was around 500 million km from the Sun, or 3.3 AU (1 astronomical unit is equal to 150 million km, the mean distance between Earth and the Sun). In the second image, taken on 14 November 2014 – two days after the landing of Philae – the comet exhibits a faint tail to the upper left; it was about 450 million km (3.0 AU) from the Sun at the time. In both images, the comet is to the east with respect to the Sun.

For several months between the end of 2014 and the spring of 2015, the comet was too close to the Sun on the sky to be observed from Earth. During this time, it passed behind the Sun as seen from our perspective, and would later be visible to the west of the Sun. The comet was observed again from Gemini-South in the summer, as shown in the third image, taken on 30 June 2015, when the comet was around 200 million km (about 1.4 AU) from the Sun; the tail is visible towards the right.

As the comet moved towards northern latitudes, it became visible from the northern hemisphere in July 2015. The fourth image, taken from Gemini-North on 4 August 2015, shows a bright tail. The comet was around 186 million km (about 1.2 AU) from the Sun and about to reach perihelion on 13 August.

The two images in the lower row show a zoomed version of the 4 August image. On the left, the original image is shown (visualised in a colour scale) with the bright comet tail extending towards the right. On the right, the image was processed by subtracting a radially symmetric component from the coma to enhance possible anisotropies in its shape.

While the bulk of the tail points to the right, there is a notable high-density region pointing in a different direction, to the lower left. The comet nucleus (with Rosetta around it) is too faint to be seen, lying within the innermost pixel of this image.