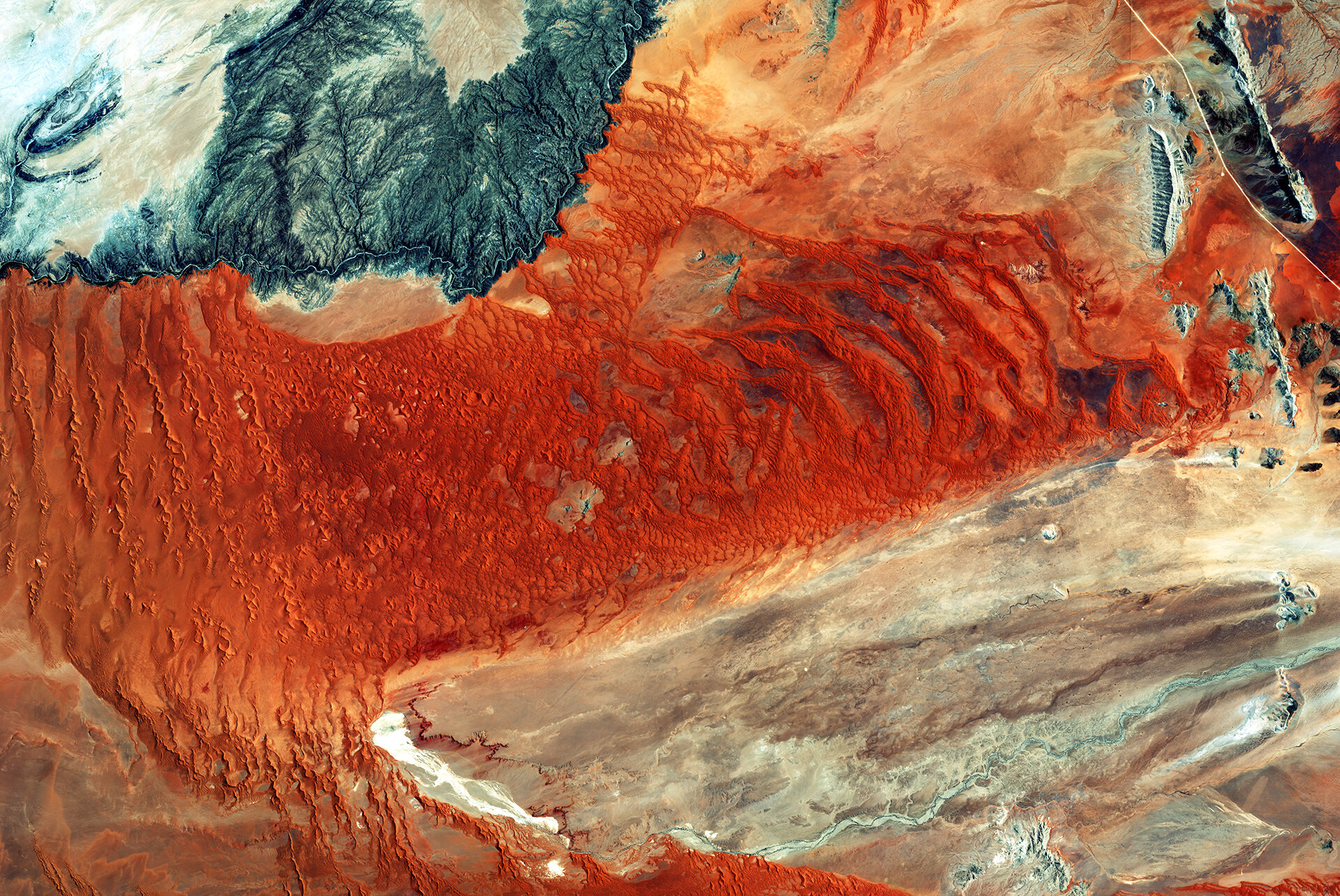 The Sentinel-2A satellite takes us over to central western Namibia, an area surrounding the Namib Naukluft Park, in this image taken on 28 January 2016.

The National Park includes part of the Namib – the world’s oldest desert – and the Naukluft Mountain range. It is the largest game park in Africa and the fourth largest in the world.

A typical west coast desert, moisture enters as fog, from the Atlantic Ocean, rather than receiving actual rainfall. A phenomenon also found along the coasts of South and North America, the surface water of Namibia’s coast is relatively cold, so that moist air moving in with westerly winds cools and falls as rain before it reaches the coast, allowing only fog to reach inland.

The fog enables life in this extremely arid region, for snakes, geckos and particular insects like the fogstand beetle, which survives by collecting water on its bumpy back from early-morning fogs, as well as hyenas, gemsboks and jackals.

The winds carrying the fog also create the imposing sand dunes, whose age is rendered by the burnt orange colour. The iron in the sand is oxidised, developing this rusty-metal colour over time. It becomes brighter as the dune ages, as is clearly visible along the middle of this natural-colour image.

Also visible along the top-left part of the image is the Kuiseb River bordered on one side by some of the tallest sand dunes in the world, and on the other by barren rock. The river blocks the movement of the dunes, which are blown northwards by the winds.

A road cuts through the top-right corner of the image. It is part of the C14 Highway, which runs for some 600 km from Walvis Bay, through Helmeringhausen and ends in Goageb.

To the right of the highway, there is a rock formation with a ridgeline, with water flowing along both sides, giving life to vegetation.

Along the bottom of the image, the Tsondab River is seen. Periodic rain falling in the Naukluft and Remhoogte Mountains causes the water to flow to the end of the ‘vlei’ – a shallow minor lake. The riverbed hits the colossal sand dunes, and appears bright white from the salt and mineral formations remaining after its water evaporates.

Despite the lack of rain, large camel-thorn and umbrella-thorn trees, and a few wild fig trees, can be detected growing along the riverbanks, benefitting from penetrating roots.

Sentinel-2A has been in orbit since June 2015, providing key information on vegetation health, among other major applications.