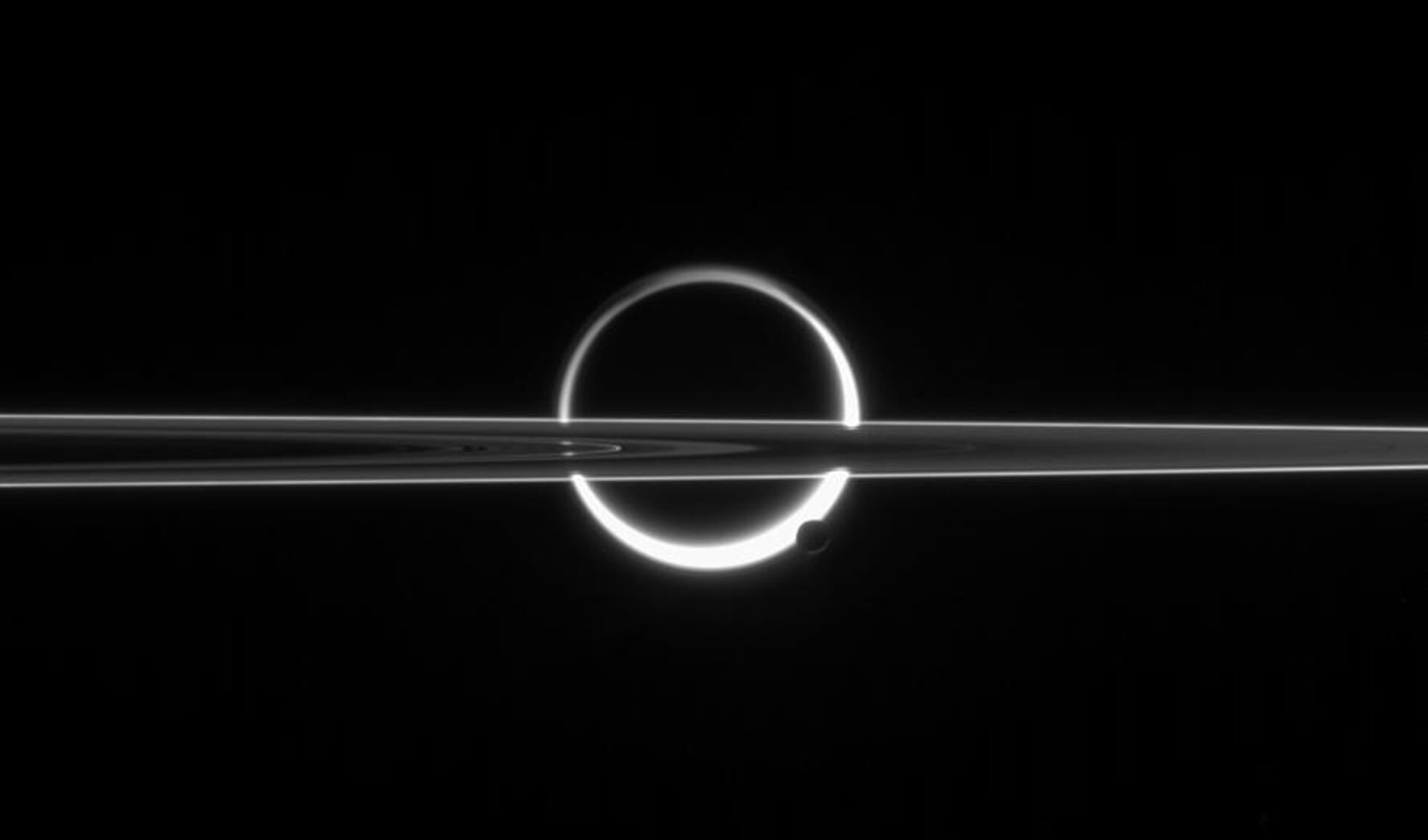 Saturn’s past and present moons

Saturn’s beautiful rings form a striking feature, cutting across this image of two of the planet’s most intriguing moons.

The rings have been a source of mystery since their discovery in 1610 by Galileo Galilei. There is not full agreement on how they formed, but among the possibilities are that they may have formed along with Saturn, or that they are debris of a former moon that strayed too close to the planet and was ripped apart.

The rings are now shepherded by the gravity of some of the planet’s surviving moons. Of more than 60 known natural satellites, two of the most fascinating are also pictured in this image: Titan and Enceladus.

At 5150 km across, Titan is 10 times larger than Enceladus, which measures just 505 km in diameter. Titan is seen as a disc because light from the distant Sun is being refracted through the moon’s dense atmosphere.

Somewhere on Titan’s surface rests the Huygens probe. On 25 December 2004, Huygens detached from the Cassini mothership and, a few weeks later, parachuted through the dense atmosphere to return the first pictures of Titan’s rugged landscape of icy mountains.

Although Enceladus is a smaller moon, it has as much character. The restless interior means that water constantly jets through cracks in the icy surface. In some images, these geysers can be glimpsed at the south pole.

The image was taken on 10 June 2006 in red light with the Cassini spacecraft’s narrow-angle camera, and is orientated with north facing up. The spacecraft was some 3.9 million km from Enceladus and 5.3 million km from Titan.

Cassini itself is nearing the end of its mission, after 12 years exploring Saturn’s system. It will be guided to a dramatic end, plunging into Saturn’s atmosphere on 15 September 2017. Before then it will be moved into closer and closer orbits to the giant planet. Known as the Cassini Grand Finale, the spacecraft’s movements will reveal details of Saturn’s gravitational field.

As well as providing a way to determine the mass of the rings themselves, this will also tell scientists whether the ringed planet has a dense core of rocks and metal. If it does, it confirms that planets build up through the collision of smaller asteroid-like planetesimals.